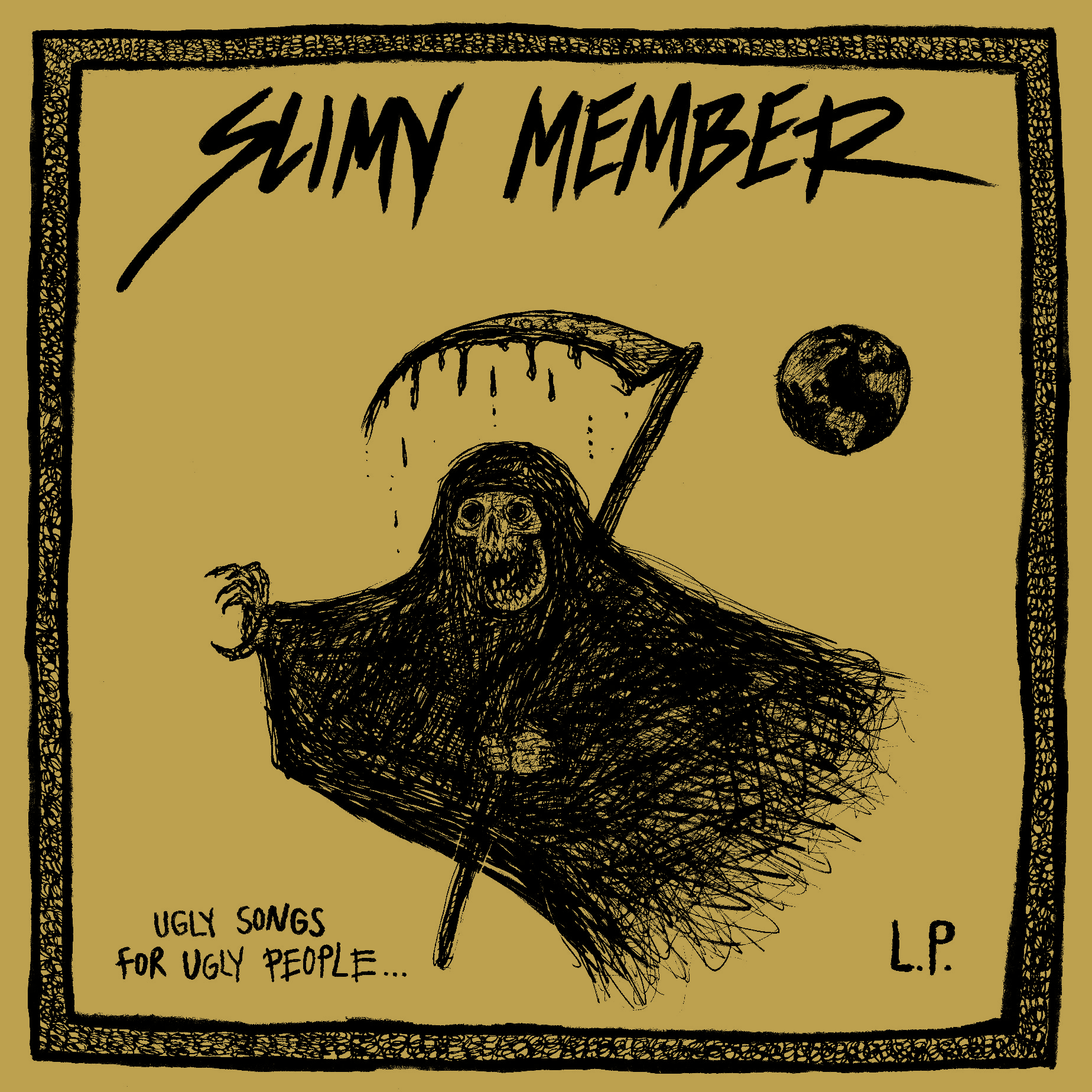 Dallas punk band Slimy Member enter their fourth year of existence in 2017 (they began in November 2013), and their long-awaited debut LP, Ugly Songs for Ugly People, has finally arrived. The LP is a big step forward for the band in terms of sound and songwriting prowess. The previously fearsome foursome have become a feversome fivesome on this LP with the addition of a second guitarist since their self-titled debut EP came out on Austin’s Todo Destruido Records in 2015. The Ugly Songs debut full-length comes out on the Drunken Sailor label in Europe (England) in a few weeks on April 7th, and I believe a US version of some kind is due out on Occult Whispers in Chicago, the label run by Dez of Cemetery.

About the music on Ugly Songs for Ugly People: The title may be reminiscent of The Cramps’ Bad Music for Bad People, but aside from some broadly generalized “dark punk” vibes, the main influence, as with Slimy Member’s 2015 EP and 2014 demo, is Rudimentary Peni – but here with more of the atmosphere of Part 1 and early demo-era Christian Death. “Besides Rudimentary Peni, our band’s influences would be Part 1, The Undead (the UK punk band, not the New Jersey band), Killing Joke, and Saccharine Trust’s first album,” bassist and founding member Austen told me in an interview in 2015.

Slimy Member’s debut LP here is a noteworthy jump ahead in atmosphere and impact. The album starts out aggressive enough with the palm-muted guitar chug intro of “Nightmare World.” When the song kicks into high gear you can hear the difference the added second guitarist, Sean of SSTD, makes – there is added texture to the music, resulting in a spookier vibe than on previous releases. Make no mistake, though – despite the vaguely gothy feel of Ugly Songs, this guitar-driven band is still rooted solidly in the sensibility of underground punk. One is put in the mind of early SoCal dark hardcore like TSOL or False Confession, or maybe mid-tempo doomy Scandinavian punk like Pyhaat Nuket/Holy Dolls (or some unique combination thereof). It’s easy to imagine Slimy Member back on Pushead’s Pusmort Records in the 80s, when bands like Septic Death and Part 1 were on the imprint; the whole release revels in the dark influences of early Die Kreuzen or United Mutation.

Singer Cesar Perez’s vocals are as echoey and sepulchral as on prior releases, and they sound good here, too; you can even understand them without a lyric sheet on a few of the tracks. In the meantime, Slimy Member as a backing band are absolutely on fire throughout the album. I’m not sure if it’s Malcolm or Sean’s guitar playing that is adding the Rikk Agnew vibe, but an Agnew vibe is definitely there; it adds an element of nightmarish desperation to the LP. The middle third of the album is marked by the band’s most “mature” material so far – a few slower tracks, but tracks that nonetheless contain some of the most poignant, compelling, and introspective stuff the band has done. I’m thinking especially of my favorite song on the entire LP, track 5, “Oceanic Feeling,” which is like a cross between something Part 1, Saccharine Trust, and early Christian Death might come up with. In this song Cesar’s vocals become a wailing lamentation while the guitars spin spidery webs of despair behind him. Austen’s slightly flanged-out bass provides the perfect intro and anchor to the song’s dirgey weight. By track 7 (“Revelations”) of this 11-track LP, things are back to business – a faster, more straightforward punk attack returns, betraying members’ past affiliations with Texas hardcore bands like Lacerations and Dead Line. Drummer Chris Reeves does an awesome job at keeping Slimy Member’s dark juggernaut of sound pounding gloomily ahead; there is a determined stomp to the drum patterns, and thanks again to the production on this LP you can hear his drumwork a bit more clearly than in the past. By track 10, “Destroy and Resist,” (below) the band is back in its full uptempo glory. Desperate and nihilistic punk with macabre overtones – that’s one way I’d characterize the LP’s impact as a whole. In the Fall of 2014, I wrote: “Slimy Member’s name obviously comes from the title of a song on Rudimentary Peni’s seminal Death Church LP. Just like their forebears, Slimy Member play a foul, freshly-rotten-from-the-tombs, foetid style of anarcho-deathrock-influenced schizo-punk that is at some points mid-tempo – even downright Sabbath-y or doomy, when it wants to be – and at other times spastic, frenetic, paranoid, out of control….Their subject matter, again as with Rudimentary Peni, alternates between the political and the macabre, and even the purely social commentary stuff comes filtered through a kind of graveyard fog of Lovecraftian allegory that recalls their kindred spirits in the creepy occult-obsessed anarcho-punk band Part 1.”

Slimy Member are consistent; I don’t see a need to revise the above passage when discussing band’s basic approach on Ugly Songs for Ugly People – except I think the songwriting, production, and musicianship has improved on this release, making it a must-have for 2017, especially if you’re a fan of mid-tempo punk written smartly and with loads of atmosphere, or early California deathrock, and/or the dark side of the early and mid 1980s UK anarchopunk movement (The Dead, The Mob, Vex, etc). Or if you’re into creepy, garagey guitar rock in general. Another note — the LP was recorded at Cool Devices studio and mastered by Jack Control of Butcher and Severed Head of State in Austin at Enormous Door.

(Sidenote: Slimy Member singer Cesar plays bass in a side-project called Pink Thing which you should check out if you’re into bands like Legal Weapon and Red Scare.) 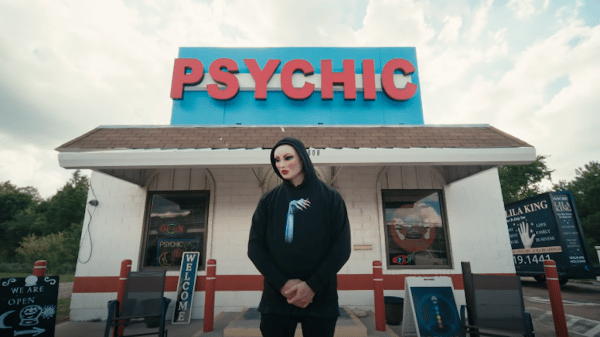