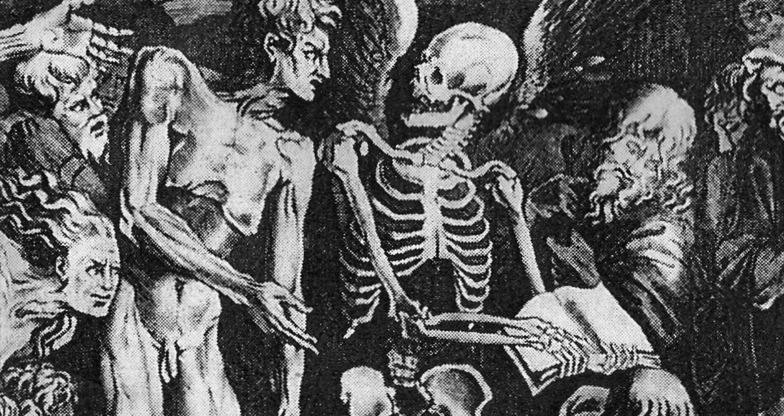 Not being familiar with his other band, Labryinthine, I can’t say I would have guessed that guitarist James Lipczynski of American Doom Metal act Crypt Sermon could shred with the best of them and write totally off the wall riffs with a surprise around every corner – but that’s just what he does on the debut demo from Skullreader. This raw, biting, three song release entitled Origin of Doubt also features James handling bass, drum, and vocal duties as well. I can’t say I would have guessed that either. Color me very impressed then, given his tasteful work in Crypt Sermon, to go along with the way each element in Skullreader engages the listener with skilled, deadly precision, as it’s safe to say Skullreader play a very high octane, chaotic variety of extreme metal that straddles the line between Death and Black.

The opener, “Vengeance and Prophecy,” startles you as it goes straight for the throat, with an immediacy that is sure to get your attention with vicious, shrieking rasps that stay out ahead of what is an altogether mind fuck of ripping, dissonant riffs. Riffs that are always on the move, rarely repeating a sequence for long before jerking you back up on your feet – all to knock you down once more with pummeling, varied percussion that blasts at all the right moments. In terms of approach, I’m definitely reminded of Aosoth here, but in a much more intense way, as the vocals are incredibly menacing and dominant in the mix (not too much, though, it rules), while the riff set is more active, varied and spastic in nature. In all, the opener really sets the pace as “The Bowels of Deliverance” and “Essence of Tribulation” follow a similar trek, but have their own individual highlights that stand out, as “Bowels” features a rather nice undercurrent of foreboding bass, while the riffing is razor sharp and frenetic as ever, and even a bit colorful at times in its intricate, tasteful nuances. “Essence” follows and is hammering as anything on the demo as it seems to very rarely, and quite briefly, catch its breath before another screeching gasket of atonal riffing explodes across the canvas with utmost violence.

Skullreader might be this band’s name, but I wouldn’t have batted an eye if they had been called Skullfucker, given the material that’s present here on Origin of Doubt. Dripping with venom, everything about this demo is absolutely relentless. I feel even those who aren’t that keen on the more atonal/dissonant sounding black/death bands out there could not refuse the raw, violent approach this band takes with their craft. Give them 30 seconds and the drill bit that is their guitar will have already burrowed deep in your cranium with time to spare to rearrange the contents inside. Simply put, Skullreader is fucking sick and should absolutely be on your radar.