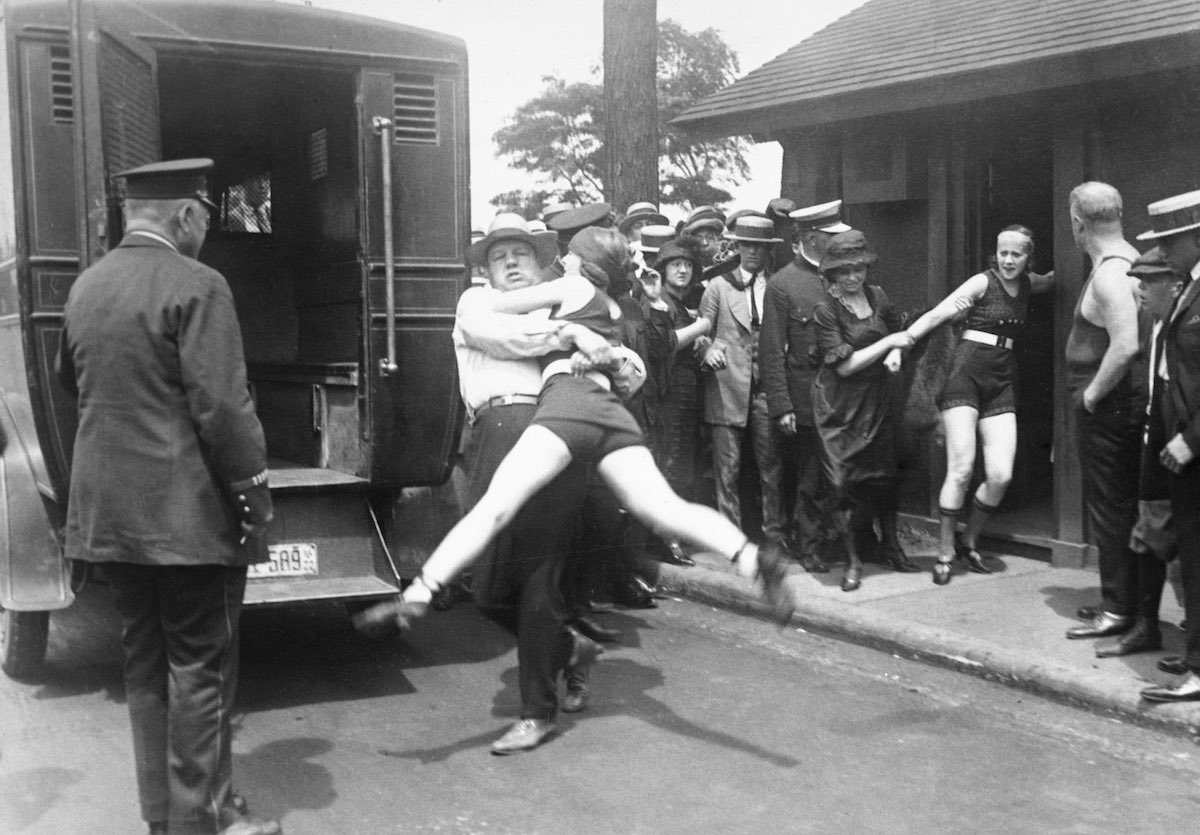 July 12, 1922 In Chicago, Illinois, a woman is being arrested for defying a Chicago edict banning "abbreviated bathing suits" on beaches. Image: Bettmann/CORBIS

When I look at vintage women’s fashion, and especially vintage women’s swimwear, it always strikes me how much changed over just a few decades. The first half of the century saw suffrage and the women’s vote in North America, and you can see how society’s condemning of the female body grew more and more tenuous in the changing fashions of the day. In the early 1900s, women’s swimwear consisted of a garment, usually made of wool, that covered her from neck to knee – at least. As women’s suffrage progressed, the women who dared to wear more “revealing” garments grew in number, prompting laws to be passed around the US that prohibited “inappropriate attire” at the beach and especially on the boardwalk. Women’s swimsuits at Rockaway Beach were publicly policed by “sheriffettes,”who carried measuring tapes with them to examine the necklines and revealed thighs of young women. Women in New Jersey were arrested for wearing their stockings rolled down below the knee, and one woman walking with her husband at Ocean Parkway in Brooklyn had her skirt lifted by an officer, who correctly suspected that she was wearing a swimsuit underneath her sweater and skirt. She was charged with public indecency – although the judge threw out the charge and told the policeman he had no business lifting women’s skirts, even in the interests of public safety. By the mid-century, the swimsuit laws had relaxed and women were more free to wear what they wanted, but the photos below of police officers hounding women in decidedly modest attire is a good reminder of both how far society has come, but also how far we have to go. Let’s make every beach in North America a nude beach! July 12, 1922 In Chicago, Illinois, a woman is being arrested for defying a Chicago edict banning “abbreviated bathing suits” on beaches. Image: Bettmann/CORBIS 1925 “Smokey” Buchanan from the West Palm Beach police force, measuring the bathing suit of Betty Fringle on Palm Beach, to ensure that it conforms with regulations introduced by the beach censors. Image: General Photographic Agency/Getty Images April 1922
Chicago, Illinois – Two bathers being escorted off the beach by a police woman. July 12, 1922
In Chicago, Illinois, a woman is being arrested for defying a Chicago edict banning “abbreviated bathing suits” on beaches.
Image: Bettmann/CORBIS