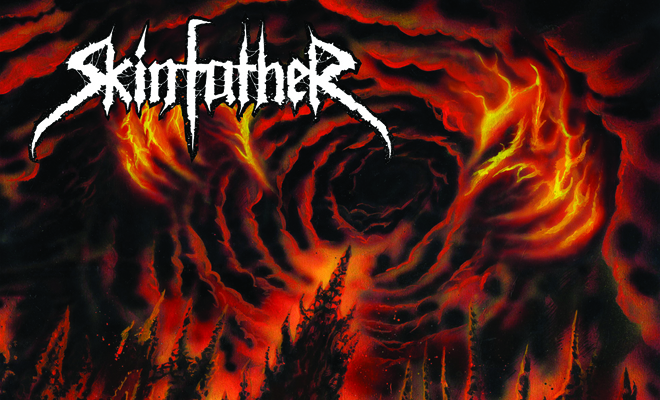 Just call it metal!  You may hear modern thrash riffs and power metal chugga chugga every so often, a little Massacre-shredding before songs like Dead Still, and Entombed in intro leads in the final track Impaled, but make no mistake – regardless of what influences come to mind on your first listen, try to listen without prejudice, because this album is cohesive.  Damn it, the vocalist never stops sounding pissed!

I actually thought I heard a little bit of old-school death metal band Wombbath in some stretches of None Will Mourn.  There are flashes of Entombed’s Clandestine, and riffs that sound like under-appreciated modern thrash band Skinlab.  Whatever little tidbits enter your imagination, they all sound just right in the mix.  This corpse is fresh!  So get your ears twitching to the sound of Skinfather‘s version of sonic violence. The leads sound like old Swedeath, so fans of the subgenre won’t feel left out here.  The guitars don’t have the buzz HM-2 sound and neither do they play straight-away punk on galloping beats.  The guitar tone sounds From Beyond-ish, and the riffs don’t sound like been-there-done-that rehashes of old favorites.

The vocals don’t vary much, sounding like a cross between Death Breath and Kingdom of Sorrow (er, what?).  He doesn’t flinch for a minute, never clean singing or humming (or anything of the sort).  He’s rightfully pissed from beginning to end, and though that may hinder some jaded listeners of extreme metal, I’m not the type to look for any band to copycat Burton C. Bell for the umpteenth time.  This is melodic singing-bashing, so get the hell out!

None Will Mourn is just catchy enough for any listener to bop along to, and the song titles are predictable in a way that is appreciated.  After all, who would want a metal band to call a Massacre tribute Love in the Rinse Cycle?  This machine is ready to spit out your dirty laundry like Satan and his dog mistook it for your homework.

My readers expect me to dish out some of my casual observances about extreme metal albums, so here’s some: there are no acoustic intros or interludes; there are no gimmicky ballads; the production is spot-on, especially for the guitars, and the songwriting is nuanced.  Oh, and they use mid-paced Death Angel-type plodding beats instead of hyperblasts.  The slow jams pound like sledgehammers.

This album does a lot of things right and is a worthy addition to your underground death metal collection!