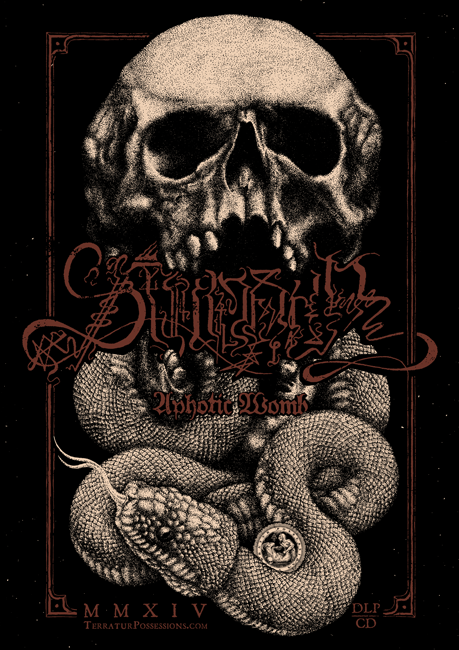 As supergroups go, some burst out of the gate and some start slow. Perhaps the members of Iceland’s Sinmara are better known for their past affiliations, but Sinmara’s Aphotic Womb is a triumph in the collective experimentation pursued by members of this supergroup. Sinmara brings together members of Wormlust, Rebirth of Nephast and Svartidaudi. These three underground outfits are revered for some of their momentous releases in the last few years. Svartidaudi with Flesh Cathedral and Wormlust with The Feral Wisdom, particularly. The result of this union of minds is a pernicious cacophony of elements brought together effectively and seamlessly, as though members of Sinmara were unified by séance. Each member brings to the table a different color of fruit from the vine, distinct not merely by tapestry or texture, but by taste. This metaphor seeks to describe the various elements that make Aphotic Womb so nuanced, and yet so cohesive. You almost hear tinges of Wormlust’s signature hypnotic dirge, seemingly induced by hallucinogens. It is the sound of bees swarming the hive, the sound of tiny, miniscule daggers propelled from the guitar strings. You almost hear Svartidaudi’s penchant for shredded leads and manic-depressive tremolo riffs that sound discordant, slithering into your ear canal like a serpent certain of prey nestling in the burrow. Like blood turning to black, and flesh turning rigid in the midst of rigor mortis, the sound of Aphotic Womb is swathe of two parts, genius and madness. Welcoming ears shall hear nothing but the sound of “Katabasis,” a careful descent down the spiral of ritualistic darkness that scars the heart jaded with most of black metal’s lesser offerings. Memorable not merely as a brilliant rendition of a prior accomplishment, Aphotic Womb creates atmosphere without an emphasis on keyboards, symphonics, or gimmickry predating the worst of what has made black metal notorious at its least aesthetic: sounds of thunder, running water, female vocals. Instead, dynamic song structures and dissonant melodies rule the day, and what is in fact mesmerizing about Aphotic Womb is that no one element emerges as dominant. It is an amalgam of sounds woven together by a master alchemist bent on the creation of a substance both significant and subtle. It is cavernous, subterranean, atmospheric, hypnotic. It isn’t Deathspell Omega transcribed detail per detail. It is eloquent in its distinction. It is brilliant. But, it is also different.

As so many have now found out that this band has made waves in the underground, follow suit, and free your ears from black metal albums repeated with monotony and boredom. Aphotic Womb is an experience. Crawl into it and emerge forever changed. Look for Aphotic Womb in my year-end lists.