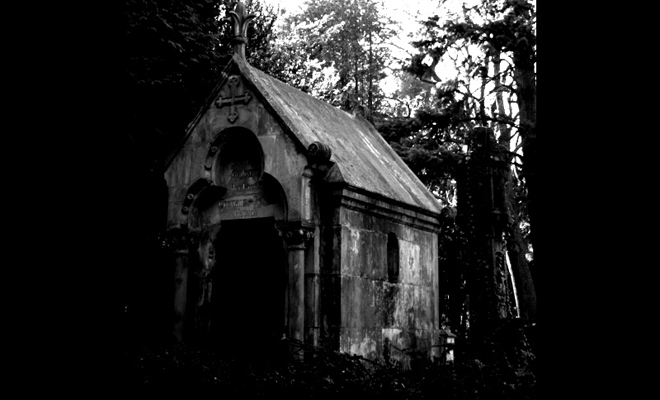 From an old tomb in Aachen, Germany, comes our latest subject of scrutiny: a band called Grimoire de Occulte and their 2012 Rehearsal cassette.

Grimoire de Occulte play their own style of doom/death – very ritualistic. Don’t ever expect blastbeats on this album, because these two tracks march to oblivion to the tune of a funeral. The cymbals keep time as a bell tolling in a church tower typically does. The occasional fill-in makes no surprise, as snare drum and bass drum plod through the proceedings like a warrior making his way through a murky swamp, choosing a spot where he wants to die.

The vocals are laden with effects, bellowing and roaring with intransigence. Safe to say the vocals make great accompaniment to the fuzzy, downtuned guitars, as the recording starts and ends in a slow, spiraling descent into nothingness.

Atmosphere is of no consequence. Played out under bleak skies forecasted for rain, the album sounds like a cement mixer slowly spinning, sending trails of soft, thick mud down your watery grave.

The riffs don’t deviate much. There are no rung notes or leads on this album. The six-string worship is lethal, suffocating, and as solemn as it is brutal in some way. Brutality doesn’t just come with slam riffs, or divebomb solos. This album feels as monolithic and dirgy as a hybrid mix of funeral doom and death metal should. Take this to an abandoned graveyard and play it loud inside a dark mausoleum until you panic from claustrophobia.

Grimoire de Occulte play this wash of riffs and ritual beats well enough for any stoner to hit the snooze button for the full runtime of 20 or so minutes, in a state of slow death. Better yet, for the listener to bask in its ceremonial glory by lighting candles and communicating with spirits, which are equally entranced by the haunting melody, as though invoked through Katabasis.

The album cover hits the nail on the head. The band claim to have recorded the session in an actual tomb in Aachen, and there is plenty of evidence in the music for the listener to believe them.

It’s not a grower if you’re a stoner. It’s instant gratification, in fact. Great change of pace from breakneck black/thrash/grindcore albums that measure brutality by pace.

Hurry now while the cassette is still available. It’s the only way you can play it in a crappy, old boombox somewhere in the swamp and get major thrill points when you get covered by goosebumps.