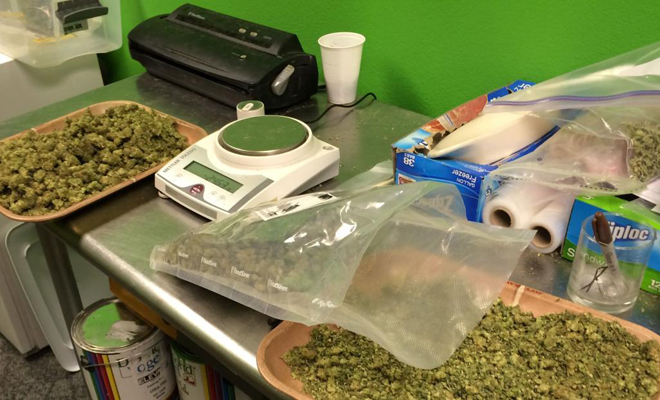 Via PolicyMic
By Vivian Giang

“How do you want to feel after smoking pot?” is one of the first questions Sloane Poorman asks clients at the marijuana dispensary she works at in Boulder, Colo.

She then tries to figure out their tolerance level by asking, “How often do you smoke? When was the last time you’ve smoked?” Even a question like, “Do you want to play video games for an hour and pass out after smoking?” is not uncommon.

“There are different types of weed depending on what you want to do,” she told PolicyMic. In order to make the proper recommendations, Poorman needs to know a lot about the 20-plus marijuana strains her facility houses, as well as the differences between flowers, concentrates or edibles. To do this, Poorman plans on smoking all of the different strains at least once.

“[My employer] recommends that I smoke them all,” she said. “They don’t make you, but it’s recommended.”

The legalization of pot in Colorado has made Poorman’s job — budtending — one of the hottest new occupations in the explosive alternative medicine industry. In its first month of business, licensed pot dispensaries in the state generated more than $14 million in profits. With this kind of growth, the need for budtenders isn’t slowing down any time soon.

Unfortunately, getting a license with the Medical Marijuana Enforcement Division (MMED) to sell pot legally isn’t the smoothest process with backlogs and a greater supply of wannabe budtenders than a demand for those positions. Some have compared the MMED lines to taking a trip to the “DMV look like a walk in the park.”

Poorman’s experience at the MMED involved getting fingerprinted, photographed, filling out “a bunch of paperwork” and paying a $75 fee. To get the green light for a license, potential budtenders need to pass a background check, and Poorman witnessed several people get arrested in the waiting room when active warrants for them showed up in the system. Since successfully getting her MMED badge, Poorman works 10-hour shifts at one of the new recreational facilities where she’s paid $12 an hour, not including tips.

While she hopes to go into advertising and media one day, the 23-year-old college student is extremely happy with her current job, which she describes as “one of the best jobs” out there.

Poorman’s first task during her shift is to take the “pounds and pounds of pot” out of the huge safe in the back of the store and weigh it “so there’s enough samples” before “putting everything else back in the bags.”

Most of the pot comes from a grow garden two blocks from the facility, but some are brought in from individual pot growers who come into the store to show off their product.

The sample pot is placed in glass jars for customers to see and smell. Employees use chopsticks — and sometimes latex gloves — to handle the marijuana, said Poorman.

But what does a budtender do besides weigh ganja all day? Poorman said it’s her responsibility to help clients, establish relationships with them and offer keen recommendations regarding which hash and oil types to strains depending on a person’s personality and needs. She also thinks it’s her responsibility to shed light on the cannabis industry. “People just think that you smoke weed to get high, but this isn’t true,” Poorman told PolicyMic. “There are several types of weed that help with back pain … we even have lotions to help with overall pains and aches.”

“People need to educate themselves instead of just being like ‘pot is bad’ — they don’t know the positive effects that marijuana can have on you,” she said. “I mean, we have cancer patients and people who have been injured.”

“We have younger people who are stoners come in … older people who grew up in the ’60s … we had this one older lady come in and said she was going to put her first receipt in a scrapbook.”

Like most pot advocates, Poorman believes that marijuana is a much healthier alternative than other substances including alcohol. “Why is alcohol legal and not marijuana? You can never get poisoning from weed. You can’t die from pot,” she said.

According to Poorman, most Coloradans think this way — and even believed this before the state legalized pot — as marijuana has always been a big part of the culture.

“In high school, we use to just park our cars and smoke,” she said. “I mean, you can smell the weed in the air everywhere in this city.” As for recommendations, Poorman told PolicyMic that she smokes certain strains to make her feel more creative or awake. When she’s trying to go to sleep, she recommends Grape Ape because she can smoke it and not have to “resort to sleeping medications.”

For anyone running a business, Poorman said the Sour Lemon Haze and Blueberry Kush are good choices because they’re both “really uppity, keep you awake and focused so you don’t get sidetracked.”

The recreational facility also sells other products for marijuana enthusiasts.