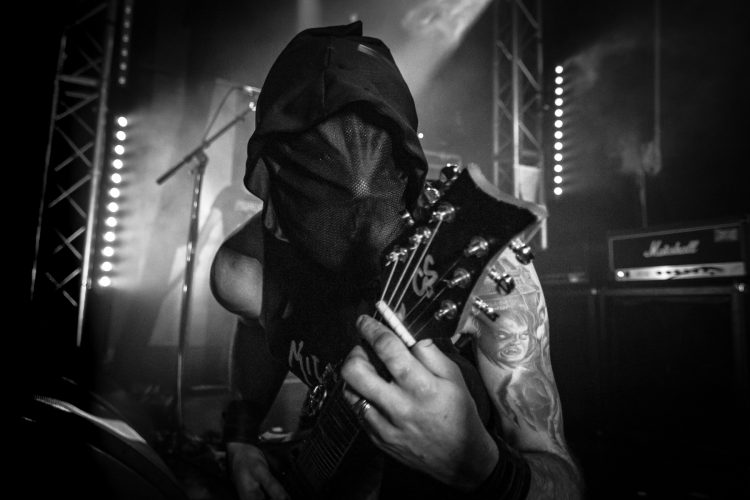 Midnight w/support from Hellripper, Aggressive Perfector and Heavy Sentence at The Dome

It’s another chilly night in London and The Dome at Tufnell Park is a black sea of studs, and leather wearing revved up ladies and gents of almost equal proportion waiting for the evil, deliciously seductive but also tongue in cheek music of MIDNIGHT. Bring on the whips and chains!

HEAVY SENTENCE, a quintet from Manchester is up first on tonight’s bill with their self-proclaimed “NWOHBM on amphetamines,” but it’s still not as a balls-out performance as is hoped for – to be fair, though, with Midnight soon to follow they have a lot to live up to.

Up next is AGGRESSIVE PERFECTOR, a trio from Manchester who hammer out some old school evil heavy metal with a SLAYER crossed with MÖTORHEAD vibe. Unfortunately, the venue is not all that busy yet so it makes for a slightly underwhelming show – but is still fun and eighties as fuck.

HELLRIPPER from Scotland are relatively new to the scene, but boy do these fresh-faced young lads know how to rip out fucking killer hellish thrash. The audience fist pump and head bang at twice the speed is seemingly possible, as the battling guitar and bass rip out some seriously blackened speed metal with a satisfyingly crusty edge. The drumming comes mercilessly thick and fast, and the vocals have an extreme metal abrasive and hellfire edge with a hefty helping of black metal piled on – and the occasional MERCYFUL FATE scream thrown in for good measure. They promise mayhem, and they fucking deliver it.

It’s difficult to describe the sheer awesomeness that is MIDNIGHT from Ohio, USA – blasting out sleazy, sexed-up (with track names like “Penetratal Ecstasy,” which they open with), blackened, thrashened Death ’n’ Roll; think VENOM, but with dinosaur balls. Hiding behind an ominous executioner’s hood, bassist/vocalist and all round evil curator of the whole damn project Athenar and the session guitarist throw themselves all over the large stage, clad in leather and bullet belts, whipping the audience into a manic frenzy, much to the dismay of some less than happy looking bouncers!

Playing tracks spanning their offerings since they began, older, rawer recordings are given new life with a visceral energy. Highlights include “Satanic Royalty,” which has a great death ’n’ roll groove, the excellently named “Lust, Filth Sleaze,” and then they close with the explosive “Unholy and Rotten.”

Stage monitors are being shoved forward, which sure made it a fun battle to remain both self and camera intact and beer-free – but it was so fucking worth it. It was relentless, fast and furious, and so much fucking fun.