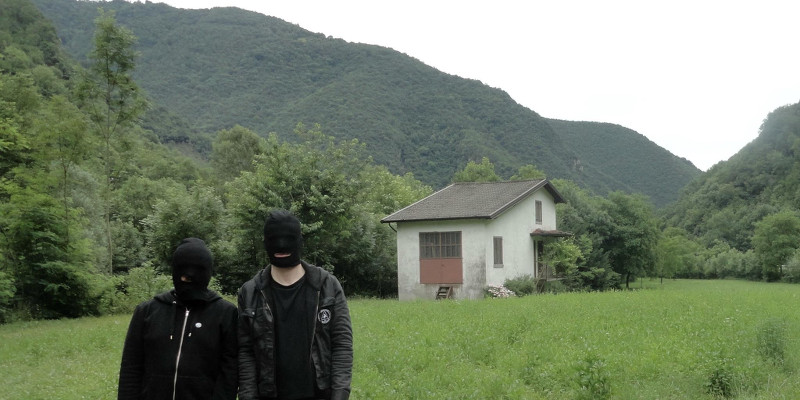 It makes sense that a series called Screams from the Gutter should have a spotlight only on Italian bands. In fact, if you don’t know what Screams from the Gutter is, you should probably go and look it up… Italy is also my home country, and so much awesome shit comes outta The Boot, and it’s usually so under appreciated and unknown of, that it’s a real shame, and I just feel like I’m doing my country a service to mention the bands that are from this amazing country that still gets little exposure when it comes to underground and extreme music. That said, pour yourself a glass of good Malvasia, sit down, lay back and get your face ripped apart by the bands featured below, because this is simply the meanest horde of bands coming out of Italy right now, they all have a lot going on, need to be kept under close observation and overall they just deserve your full and unconditional attention, right now, because they fucking rule.

An Orbitoclast was nothing more than an icepick that the infamous lobotomist Dr. Walter Freeman used back in the day to perform his even more infamous lobotomies by severing the frontal lobe of the brain with said icepick, accessing the grey matter by knocking the pick through the roof of the orbital cavity. Fucking intense shit, just like the music of this fantastic thrashy blacked crust band from Grosseto in Tuscany, central Italy, called ORBITOCLASTO. Orbitoclasto’s music, just like the tool they are named after, is pretty damn threatening and evokes scenarios of pure suffering and pain. The sounds are icy, corroded and malevolent and plunge the listener into a suffocating and claustrophobic state of misery. Bands like Iskra, Gallhammer, Carpathian Forrest, Skaven, Counterblast and the latest more punk-oriented music of Dodsferd and even early Sepultura, Bathory and Celtic Frost are good indicators to understand this band’s sound. Pure fucking hateful blackened crust filth, of the highest grade! Fans of all “post-metal” sounds take note. SEDNA is an atmospheric black metal band from Cesena in the Romagna region of central Italy. They play a gloomy and solemn brand of atmospheric sludge and doom-infested black metal that brings to mind bands like Altar of Plagues, Wolves in the Throne Room, Amenra, Panopticon, Winterfylleth and the such. This band uses high production standards and a very crisp sound to elevate their music to devastating effects: the music is thick, enveloping and thundering, and made of long and winding songs that wander and swirl in massive vortexes of grim and unapologetic heaviness. Don’t miss out, this full-length by the Italian trio is top notch atmospheric black metal and guest vocals appear on the album courtesy of Stefania Pedretti of the mighty OvO and of Mike B. of psychedelic sludge crushers Viscera///. Out now on Drown Within Records! Bring on the FILTH! STASIS are a rabid and unfuckwithable stench/d-beat/crust/death metal abomination from Bologna, central Italy! This awesome band is debuting with this mauling and hallucinating demo that is packed to the fucking roof with fury and wrath, but they are far from beginners in the Italian crust movement – in fact, they all come from other established bands in the scene like Cancer Spreading, Haemophagus, Gravesite, Saturnine and Tumor Necrosis Factor. Take His Hero Is Gone, Wolfpack, Acephalix, Skytsystem, Counterblast, Bolt Thrower and early Obituary, and there it is: the fucking horrifyingly and insanely vile, scummy, putrid, hostile and wrecking music of Stasis. Get ripped apart! 4. BLACK TEMPLE BELOW – Split with Guvenna

NO ONE should have excuses for not knowing about BLACK TEMPLE fucking BELOW. We’ve talked about this band a million times here on CVLT Nation (also here and here), for two reasons mainly: 1. they rule, and 2. they fucking rule. Now, Black Temple Below are masters in weaving the dark and putrid art of sepulchral sludge. Their scummy and deathly music crawls and slithers like none other. This band is just MADE of scum. Massive downtuned and mummified riffs that bash skulls in like ten-ton orc fists. A rhythm section that sounds like a hurricane of bile and vomit, and vocals that sound like the slit throats gurgling with blood of an entire mass grave of corpses. There is no need to keep talking here, just hit play on the damn thing and let the band’s aberrant sonic scum enter your sorry ears and eat through your skull-like a horde of devilish maggots. The songs playing below will be part of a split with Japanese sludge psychopaths Guvenna (ex-members of Coffins) You might have guessed right, HATE & MERDA simply means “Hate & Shit”… That said, not much to expect from this band than those two things: fucking hate and filth for DAYS, on repeat, endlessly haunting you, shoved down your throat, your head pushed in shit, your body run through the meat grinder, your bones turned to dust, your synapses ruptured, your mind exploded from within, your existence… fucking shattered. That’s what this hateful duo’s daunting and hallucinating music sounds like. They don’t have a proper release out yet, but you can witness their savage, damaged and scum-corroded music being played live in the videos below, along with a third video of their single “Pioggia di Cicatrici e Sogni Negati”: noise rock, crust, sludge, ambient, grindcore, black metal and pure negative abstraction depicted in a surreal and hateful landscape of horror…. Basically, the best shit ever.