Maybe I’m biased due to my proximity to Philadelphia – and it being the only place nearby where I can consistently see good shows – but I can say with confidence that it has one of the coolest scenes in the country. I’m not talking just about there being some pretty popular bands to come out of the city in the past few years (Salvation, Cape Of Bats, Sickoids, Perfume River, and others); rather, I’m referring more to the fact that Philly’s current DIY/punk scene covers pretty much all imaginable territory. There’s d-beat, deathrock, blackened punk, power pop, fastcore, synthpunk, noise rock, post-punk…I could go on listing genres, but the point is that in the city of brotherly love, there is something for everyone. However, not everyone is aware of this, because like most cities, there are various niche scenes existing simultaneously, sometimes without knowledge of the others. And that’s where Chuck Meehan comes in.

To give a little background, I first came into contact with Chuck through Fucked By Noise; and maybe a couple months later, we ended up talking at a show at west Philly’s premiere punk spot, Second Empire (named after the Blitz LP, of course). Since then, we’ve had conversations at pretty much every show at which we’ve both been present, usually at Second Empire (or 2E for short). Chuck has a long history with punk, starting in the 70s with his first exposures which also happened to be the first wave (he always cites Damned Damned Damned as being one of the most important); and then in the 80s, with his involvement with booking various shows in Philadelphia (he booked what Cheetah Chrome Motherfuckers said was their best US gig, if you need confirmation that he was on top of shit), not to mention the fact that he was a founding member of the legendary Philadelphia 80s hardcore punk band, YDI. Cooler still, unlike many of his peers, Chuck hasn’t stopped paying attention to what’s going on in punk. In fact, he’s helping to document it – specifically by recording every Philadelphia area band who plays at 2E for a compilation series he’s putting together. It all started as an experiment to test a field recorder he’d bought for demoing tracks, but less than a year later, Chuck has a 24 track compilation cassette out, and a second already in progress. Now, this isn’t like your typical punk live bootleg stuff. There are no random conversations or the sound of a tape recorder being dropped; these recordings are good, almost as if they were live in studio recordings. From May-November 2015, Chuck recorded every Philly area band who played at 2E; and from those recordings, the bands selected their favorite tracks to be featured on his compilation cassette, aptly titled Live At Second Empire Philadelphia.

As I previously mentioned, Philly has something for everyone, and Chuck’s compilation illustrates that reality more vividly and organically than a typical scene report-type article ever could; obviously being in the middle of things allows for far more accuracy than the top-down approach. Plus, unlike your typical scene report, this cuts out the middle man rambling about how cool it must be to see these bands on a regular basis, and brings you right to the bands themselves. Speaking of the bands, there are some names on here that I’m sure many of you are familiar with: Haldol, Low Charge (RIP), Nightfall, Latex, Pollen (Philly’s new mangleD-beat heroes), Blank Spell, and Fuck SS. Of course, the benefit of a compilation like this is that it puts a spotlight on some of the bands who aren’t as well known outside of Philly, such as Fragment, Chondria (RIP), Dronez…I could go on, but why bother listing them all when you can see for yourself on the Mace Canister Recordings Bandcamp page, below? Plus, wouldn’t that defeat the purpose of cutting out the middle man?

Obviously, I highly recommend snagging a copy of the cassette or getting a digital download, because not only does this tape have some killer tracks, but all of the proceeds go towards keeping 2E doing what it does. And based on this compilation alone, you probably want that just as much as I do (not to mention the bands you haven’t heard who’ll be on the second installment). Plus, as an added bonus, the cassette features artwork from one of West Philly’s coolest up and coming punk artists, Michelle Krysztofiak, whose other work can be found on her art blog Ugly Illustration, and on various flyers I’m sure you have seen or will see circulating the internet in the very near future.

What more is there to say, other than keep your eyes on Philly, because there’s a lot more where this came from. 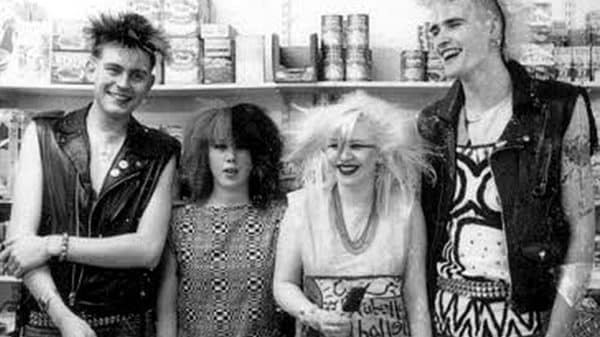