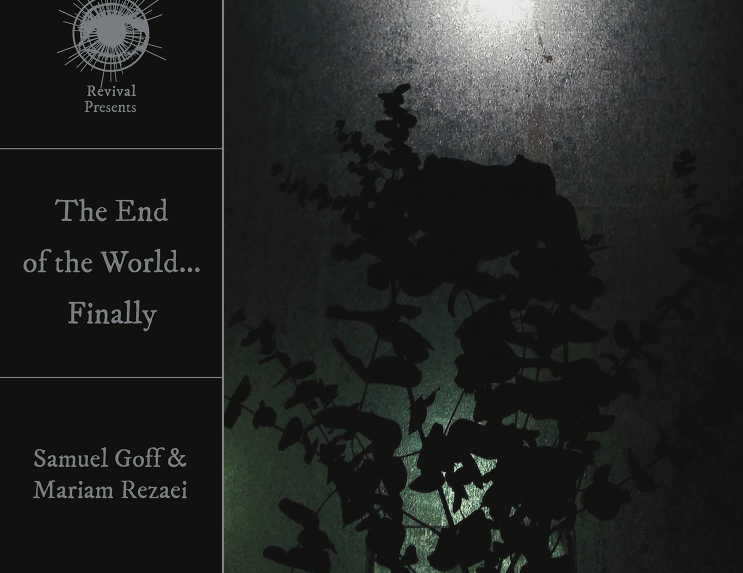 It’s hard for me to explain what’s happening in my ears right now. It’s like chaos made sonic. But there are glimmers of rhythm that shine out from the chirps and buzzes and free jazz drums as they blend in a cacophony of noise. And then out of nowhere, it’s all rhythm, everything’s queued up in that linear way we humans like and I’m able to relax for a second. The title of this release from Richmond, VA based percussionist Samuel Goff and London turntablist Mariam Rezaei is The End Of The World…Finally, and it’s out today on Cacophonous Revival Recordings – order it here. Synchronistically, right before I began to write this post, I’d put on one of those gorgeously-shot but ominously doomsday nature documentaries for my kids to watch. I was listening to them coo in wonder and then cry out in fear, as each beautiful thing on this planet was paraded in front of them, only for the narrator to then describe how human greed and corruption are quickly destroying it. As I listen to this collection of apocalyptic hymns, it’s like Goff and Rezaei are telling the story of how we murdered each other and the planet with noise. I hear the noise of knife against bone, cancer malignifying cells, garbage drowning land, plastic drowning seas, production lines chugging, POS systems beeping, mother earth’s veins being opened. Want a taste of a future we may still be able to avoid? Listen to our full stream of The End Of The World…Finally.