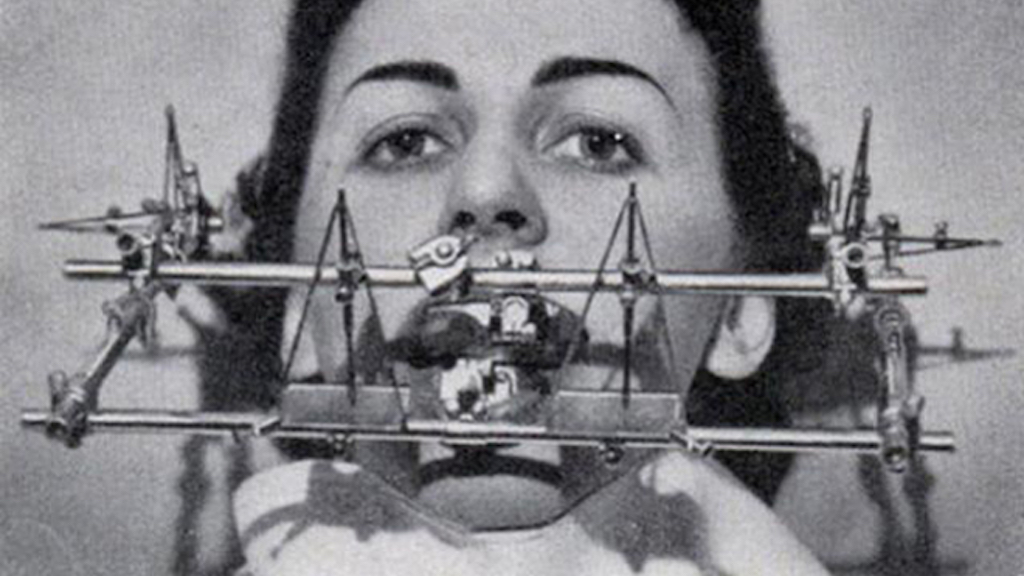 When did going to the dentist become an event to fear? Looking at antique dentistry tools, I’m pretty sure it was around 7000 BC when the bow drill (pictured below) was used in the Indus Valley to drill into diseased teeth. Thinking about someone hovering over me with that thing digging into my mouth is terrifying! My own experience with a dentist’s drill makes me happy that technology has come a long way since those days. Check out 13 disturbing antique dentistry tools below…

Bow Drill (7000 BC)
The earliest known dental drills originated around 9,000 years ago in the Indus Valley area of present-day India and Pakistan. Dental bow drills were constructed much like bow drills used to create fire — with a stringed wooden bow tied to a rotating spindle — except that instead of using friction to make a fire, the spindle was used as a drill, with a flint head made to penetrate teeth. (The pictured example is an Eskimo drill from the early 20th century.)

Dental Pelican (1600s)
Dental pelicans, named because of their resemblance to a pelican’s beak, were tooth extraction tools used from the 14th century through the late 18th century, when dental keys became more popular (see below). Examples like this French or Italian pelican consisted of a rotating claw mounted on a shaft in an adjustable slot. The tooth would be pinched between the claw and the head of the shaft and then pulled out. Dental Key (1810s)
Dental keys, named because they were modeled after door keys, were used to extract teeth. The claw at the end of the shaft was designed to grasp the diseased tooth as the instrument was rotated to loosen the tooth — a crude method that often resulted in broken teeth, tissue damage and jaw fractures. By the turn of the 20th century, forceps had rendered dental keys obsolete. Finger-Rotated Dental Drill (1870s)
This unusual six-inch-long drill was attached to a thimble that held it in place while the spindle was rotated by the dentist’s finger at a rate much slower than other dental drills of the era, which used bow action, hand cranks, foot pedals and ultimately, electricity. Oral Speculum (1600s)
A speculum is used to open a body cavity for investigation or medical procedures. This model of oral speculum worked like a reverse vise, with the screw prying open the patient’s mouth for easy access.

Secateurs (1810s)
This French orthodontic device (“secateurs” being French for “cutters” or “scissors”) treated an uneven or diseased tooth by locking on and wrenching out the entire tooth from just above the gum line. Goat’s Foot Elevator (1700s)
Another extraction tool, the goat’s foot elevator — whose double-pointed tip resemble a goat’s cleft hoof — was used in conjunction with other devices. Its major purpose was to aid in the clean-up of remnants of dental root and tooth fragments, since tools like pelicans frequently failed to remove the entire tooth and root. Its pointed design allowed it to be inserted into sockets to “elevate” dental tissue and other material. Sometimes it was even used to loosen a tooth before extraction by other means. Dental Mouth Gag (1500s)
Dental mouth gags are used to keep patients’ mouths open during procedures. This 16th century gag uses wing nuts to open and close the handles and lock them in place. It could have also been used to pry open the mouths of patients suffering from lockjaw. (source: Physick) Dental Screw Forceps (1850s)
These unusual American forceps contain a extendable screw that was held in place by the blades to ease in burrowing into the tooth’s root during extraction. (source: Physick) Bone Chisels (1780s)
Unlike modern dental chisels, which are petite and used largely for cleaning purposes, antique dental chisels were large and used more as extraction devices, functioning much like traditional chisels to dig into the gum line to remove teeth. Tongue Ecraseur (1850s)
A tongue écraseur was used to remove a diseased portion of the tongue in order to prevent the infection from spreading. The chain was looped over the infected portion and tightened using the ratchet, stopping the circulation of blood to the area. URINE, SCAVENGERS AND THE WATERLOO TEETH. HORROR DENTISTRY STORIES FROM XVIII-XIX CENTURY – PART II: THE TEETH OF THE DEAD.

We ended part I of our horror dental story hinting at the flourishing business of human teeth between centuries XVIII and XIX. As people...

Besides writing on a couple of underground magazines, I am a high school teacher. More precisely, I teach Philosophy and History. And if making...