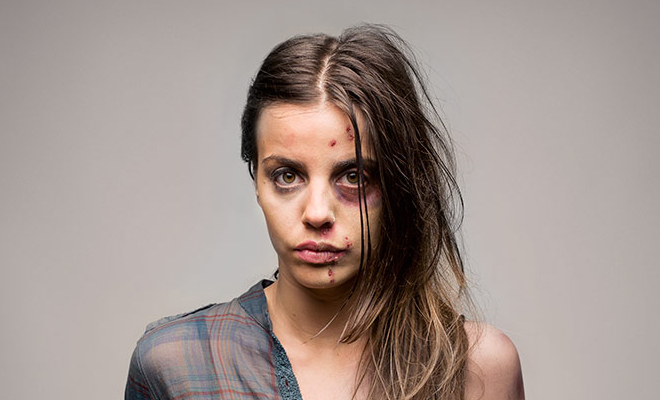 Roman Sakovich‘s collection of portraits, Half, is a striking portrayal of how drug addiction ravages your body. Each of his subjects is our culture’s dichotomy of social “success” and “failure”. Of course, especially with the rise of pharmaceutical addiction, people can continue to portray themselves as successful or responsible while in the grips of addiction. And I have met a wealthy alcoholic or two. But these faces, all scabbed up and gaunt, are sadly familiar ones living here in Vancouver. Whoever coined the term “heroin chic” when looking at Kate Moss had perhaps not walked the streets of Vancouver’s Downtown East Side. If they had, this might be what they had seen – people who might have once had jobs, families, friends, whose lives now revolved around getting high until they die. The photographer Roman Sakovich has gotten some heat for his project Half, a series of images detailing the effects of drug abuse, particularly with respect to methamphetamine addiction; his subjects stand, face forward, their lefthand side polished, even proud, while on the right, their bodies are ravaged by scars and scabs characteristic of addiction. The jarring split-personas are achieved not through photoshop but with expert make-up and styling.

The artist has been criticized for his simplified portrayal of drug dependency; by his own admission, the images, in their shocking nature, exclude a more nuanced exploration and rely in part stereotypes. Problematic for some is the fact that the non-addict self is styled professionally in suits and crisp button-downs, while the addict wears more urban attire, the implication being that class and drug use are profoundly connected.

Regardless of the controversy (and perhaps even because of it), the shocking series inspires much-needed and critical discussion on drug addiction, an illness that plagues tens of millions nationwide. Avoiding blaming and scapegoating individuals, the artist provides an intimate approximation of selfhood torn by addiction, one that inspires empathy, not disgust or prejudice.
Sakovich’s subjects, their identities split in two, are as you and I, lead by hopes, fears, and complex yearnings. A doctor, stethoscope slung over her shoulder, hair in a tight chignon, directs a placid glance comfortingly at the viewer; only after allowing our eyes to drift across the print do we see this figure of heath and safety cruelly overtaken by substance abuse, her eye downcast and purpled, a dried lip furrowed and lined. We read these bodies from left to right like strange texts, imagining personal and intimate narratives in order to reconcile the two faces before us. Ultimately, we are left with the powerful warning, “This could happen to you.” What do you think?