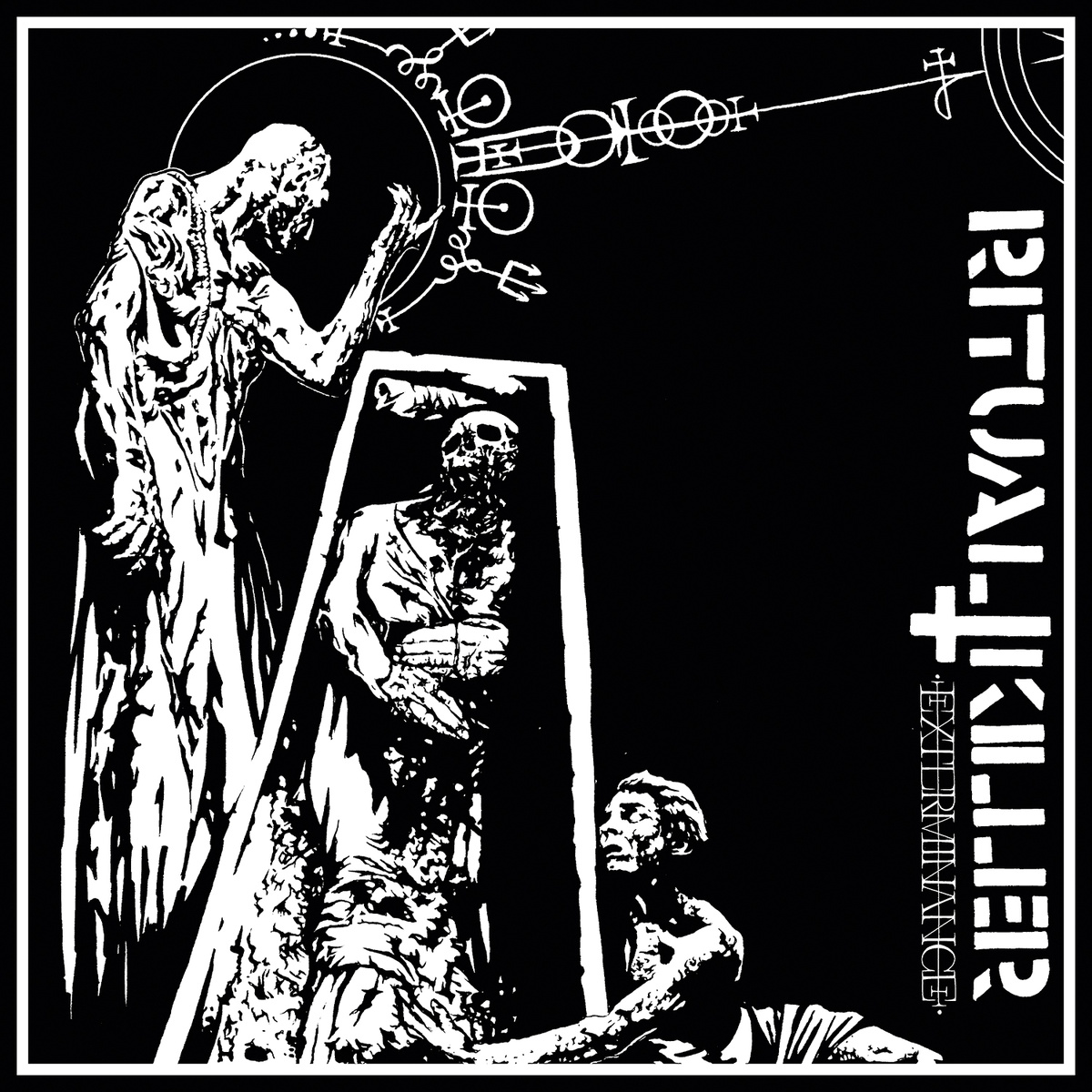 Ritual Killer are brutal as fuck. Punk, death, grind – whatever it is, Al Necro doesn’t mind. Ritual Killer brings us a vision of murder, chaos, violence and insanity with their latest eight-track album, Exterminance.

Exterminance starts things off with a hideous intro rife with demented murmurrings, before all hell breaks loose, and brutal grind/death assaults the ears. You’re put on ice until further notice.

Track one, “Bury The Earth, Bury The Sky,” is a fitting moniker for the song. The band don’t just blast from the brutal first note to the last. Mostly, there’s death metal downpicks and alternate picks to go with the uptempo pace, sometimes dishing out punk three-chord riffs that send the moshpit into a frenzy. The band don’t wimp out with acoustic guitars or clean sung parts. If BTK turned into a one-man band, he’d sound like this band from hell!

Ritual Killer don’t overdo one riff or another. Although the pace is mostly uptempo to up the intensity, they sometimes slow down for some much-needed transition. Sometimes the drums slow down the pace while the guitars play the same riffs. Sometimes, the riffs drop the hammer on the breakdowns, sending bopping metalheads to early deaths. Highlight track is “Cuntius,” although Al Necro ain’t got a clue what that means (I can guess, though it won’t sound pretty).

“Cuntius” starts off with a scream and then it’s grindcore-a-go-go. The band go from fast to breakneck fast, all in the name of brutality. The lead guitar sounds in the middle of the track, wailing like a dying cat, then it’s a slower riff and insane vocal decrescendo, until the band downpick some and launch back into blast mode.

The song titles are also nice from first to last. On “Crippling Beast,” the band plod on some d-beat, before quickening the beat once again. Album closer “Passing Of Creation” starts out brawling, before breaking out into punk grind heaven. The four minute runtime for the final track is as epic as punk will get. It’s a nice way to close the album, topping it all off with something different without moving away from the rest of the material altogether. The vocalist is nuts here. He does his own take on vocal acrobatics, sounding like a demented preacher on Pale Corpse Incantations, whispering sweet murderous nothings on other tracks. On the killer first track, the aforementioned “Bury The Earth, Bury The Sky,” he doesn’t hide his true colors, raving and rasping like a masochist begging to be tortured.

No filler fodder here, friends. Exterminance is an abbattoir on Thanksgiving Eve. No questions, no gimmicks – grind-punk-death madness for those of us who want a lot of sick to go with their music.