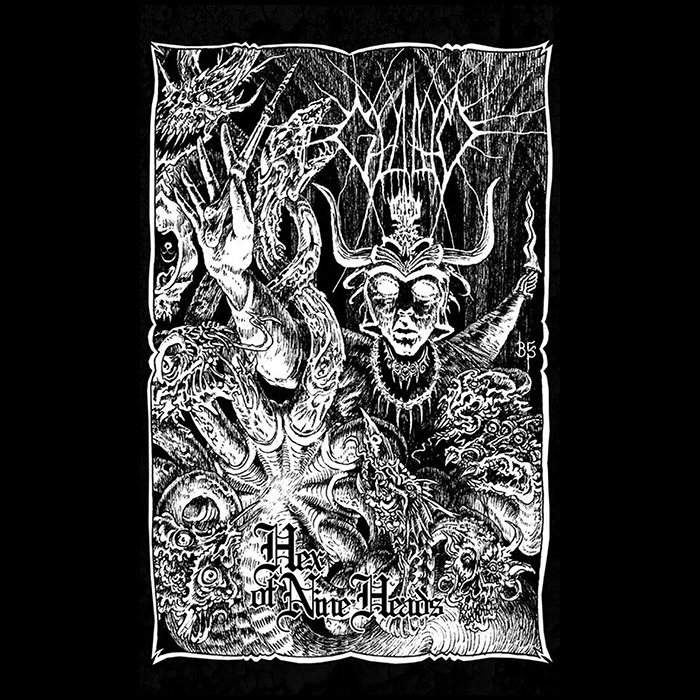 We have already discussed the immensity and vastness of Gloam‘s hopeless craft. Through two previous releases – a demo and an EP – the Santa Cruz-based gloom-sorcerers had already showed us what depths of misery and despair black metal and doom can reach when the two genres are interwoven with such refined mastery as Gloam does. With an intro and outro courtesy of Lord Vast of Lluvia fame, and and six tracks of fathomless aural hell sandwiched in between, I’m sure you can tell solely by the premises that their debut full-length album, Hex of Nine Heads, is a huge fucking abyss of sadness and despair.

The sound of icy northern winds and flamenco guitars kick off the album with an ominous note – and soon, the electric guitars kick in and start to paint the portrait of your fucking demise, designing a sonic arabesque that literally bleeds misery from every note produced. Just like the title hints at, “Where Freezing Winds Forever Blow” opens the album freezing the blood in your veins, stiffening your every muscle in a hellish cramp of cold and bitter frost, as you watch your soul slowly evaporate and escape from a huge and gaping hole placed where your heart used to be, your ribcage gashed open as Gloam’s music spitefully digs within your gizzards, turning you into a corpse. I don’t even know how to describe the comatose and mid-tempo paced death-march of Gloam’s music. It’s not blackened doom per se, but it is so sad and fucked that the music never really picks up, preferring instead to eternally linger in a surreal and hallucinated drifting. It’s some of the slowest black metal there is without really ever taking doom shape, but at times it does get frenetic and unpredictable. The blasting is sparse, and when it happens it appears to be spastic and deformed in a miserable frenzy.

“Torrents of Blood” then brings forth this old-school Norwegian vibe, which traces its origins back to Emperor and Gorgoroth, upping the rawness and developing into some seriously classic shit towards the middle. This is evidence that Gloam have studied Black Metal down to the fucking atomic level, and dissected every molecule of it to own and master the craft in a way that few bands can showcase these days. Soon, the song lowers its miserable head once gain, slithering back into a slow-paced funeral dirge hole of sadness. It is in these moments – the slow ones – that Gloam’s craft reaches its most accomplished and monumental point. Gloam are great shredders, but their slow parts remain unchallenged in the world of underground black metal, as they showcase an unusual way with atmosphere and and incredible taste with solos and texture that the fast parts do not fully allow to breathe and blossom.

“Execration Trance,” with its five minutes of length, is one of the shortest songs on the album. Here, too, there is some pretty insane noodly ruffing and some grim and winding riffs happening, a way of composing music that sucks you into a harrowing trance, eventually leading you into the Deathspell Omega-ish nightmare sonic architecture of the instrumental “The Spectral Wound.” “Corporeal Torment,” on the other side, is a thrashy and barbaric slab of blackened disgust that features some of the most straightforward and pummeling black metal riffs on this album. I hear hints of Burzum and Hate Forrest in this track – the song structure remains concise, repetitive and trance-like as it beats the listener continuously into a corner of pain and suffering that seems impossible to back out of. The closing title track is a twelve minute black/death-doom behemoth that slowly crawls to a nightmarish climax of absolute aural torment before launching into the last five minutes of “performed” music on the album, which literally feels like a collapsing grand finale – a closure of epic proportions where Gloam show off the sheer force of their technicality and creativity with an escalating rampage of progressive back metal that had me envisioning some of the most towering moments of Weakling’s “Dead As Dreams” but transposed in a more “classic” black metal delivery (not cascadian). Gloam are masters of the darkest crafts and with “Hex of Nine Heads” they have proven this point beyond what can be humanly debated. They are one of America’s finest black metal bands and just keep getting better and blowing my fucking mind at every release.  “Hex of Nine Heads” was released on cassette tape earlier last month by the always flawless Caligari Records.