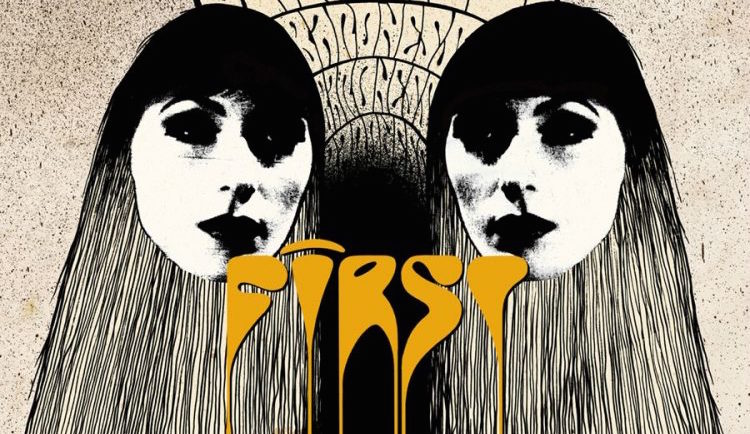 With a few months before Baroness’ new record Gold and Grey is released, Cvlt Nation looks back over their long career to piece together how they got to this stage, tracing their sound and art evolution. Here, we go back to the start to revisit their very first EP, First.

As I type this, people are losing their shit over the blastbeats in the single “Seasons.” Rightly so; there they come out of left field, an extra and surprising element in a dense track. They’re present here but more as part of an overwhelming barrage of new ideas and directions, all bound loosely in a throaty hardcore package.

These influences were all but shed by the time they emerged as a colourful, angular prog-sludge outfit for Red. Here, the ferocity is in full force. It’s all fun, captivating stuff, but it’s so brimming with ideas that it barely hangs together, sounding barebones in one breath and then whipping up a flurry of activity and noise, changing direction and tone with little to hold it together. It’s exhilarating but the least coherent of all their releases by some margin, and even if they weren’t especially interested in coherency it still dents the record, ending up significantly less memorable than their later work.

The artwork is a fair stretch from the detailed alt-art nouveau that Baizely favours now, but it’s an interesting starting point; his female figures grew much more elaborate, adding layers and detail. Just as they later got more comfortable with a more ambitious vision, so they did here, though curiously the artwork for First hints more at their raw side than the deluge of information that the EP ends up presenting.

“Tower Falls” opens with overdriven, atonal noise and dives straight into one of the their most ferocious, winding riffs, bursting into a cascade of groove sections. Later, it disintegrated into a wash of pedal effects and then jumps back into savagery, cycling through ideas and sections at breakneck speed. Spent, it collapses into a simplistic guitar pattern before leading straight into the next track.

By “Cœur” – even this early on – it’s clear that the EP is a little disjointed, more interested in racking up ideas and presenting them in flurries than song economy or strict structure. The ferocity here is uncontained but does settle slightly into something more cohesive, which quickly takes the shape of a rolling hardcore track, peppered with Baizely’s cataclysmic bellow. Here it’s the momentum that binds the track together, along with some more memorable scratchy riffs that melt into the drippy harmonies that came to define Red. It helps that this track is more than twice as short as Tower falls and is easier to piece together.

Baroness’s trajectory is similar to Mastodon’s; their ferocious early material is burned off in their rise into the stratosphere. A re-visit of First shows a band really building up to Red, meandering through bits and pieces. For all the negative connotations that style of songwriting suggests, everything on first is raw and fresh, and for throwing their songwriting chops to the seven winds they produce something that’s captivatingly energetic, if a little overwhelming.

The early EPs are a success and should be celebrated alongside their later, better-realised work. Laying the groundwork nicely, they’re sorely in need of a re-issue.