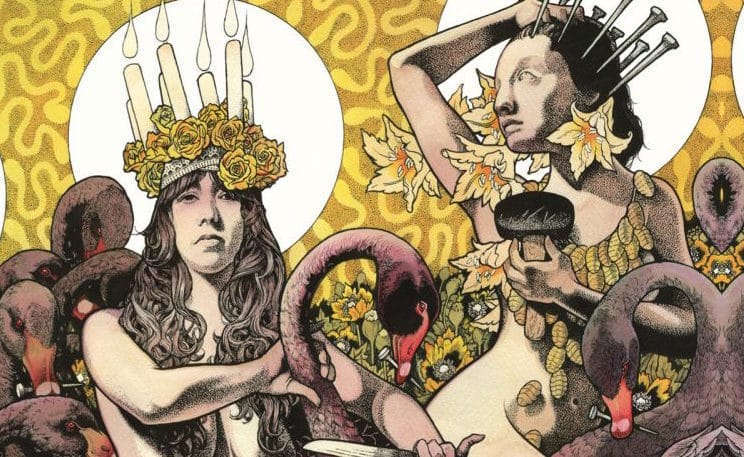 With Gold and Grey having just been released, Cvlt Nation are looking back over their long career to piece together how they got to this stage, tracing their sound and art evolution. This time we reach their focussed, accessible Yellow, the first side of their first ever double album.

Yellow finds Baroness more refined, a commercially-friendly, pop-y distillation. For all their twists and turns, this was an unexpected one. But Yellow follows the strengths we’ve seen Baroness exhibit previously; their ease of switching between throaty savagery and calmer sections, their distinctive, flowery guitars and the balance of controlled songs and looser tracks of pedal noise chaos. All of this is present here, showing the best of Baroness whilst tightening up the songs, making the payoff from the more succinct tracks even more satisfying.

Yellow Theme builds up with all kinds of esoteric noises blossoming, Baroness letting loose with pedals, building atmosphere. This is an early indulgence, but it doesn’t last long before the controlled explosion of Take my Bones away. Straight in with a Certified Baroness Banger, this is the most immediate they’ve ever been, the tightest and poppiest and driest. It’s jangly, the guitars recalling Johnny Marr, laying the foundations for March to the Sea. Here they showcase a little more of Baroness’s tom-heavy thunder, a low percussive rumble under the champion guitars.

Little Things is sweeter, almost twee. There’s been a progressive edge to a lot of Baroness’s stuff but here they adopt a prog rock sound, in the vein of some of the gentle early Genesis/ Camel/ Caravan stuff. Twinkler is a little campfire sing-along, a curiously wholesome energy dip in the middle of the record. It seems like, at this point, they’ve swapped the vitality of the previous record for something a little more relaxed, going for the thunder/ rain approach of Red. Taking us out of this energy lull is Cocanium, which builds up, showcasing the record’s excellent approach to warm drum production. The riff that kicks in almost two minutes into the track snakes itself around, building up to one of the most driving, overdriven moments on the record.

Back Where I Belong follows some of the patterns laid down before, leaning towards indie rock, but is a good showcase for some smooth guitar solo sections. There are some darker moments, and Baizely’s voice builds later on, reminding everyone of the barely-contained passion. The ending dips in energy again, a sweet ending for a quaint track, the broadest departure in their whole discography. Things are brought back a little by Sea Lungs, probably the closest to sludge metal here, certainly the darkest and most feral track. It’s a good pick up at the end of a record that feels nostalgic, washed-out and sad. The energy doesn’t last long; Eula is another glum, creepy track. a drippy, psychy offering, this is the beginning of Baizely’s lyrics that sound truly like there’s something badly wrong, which is focussed in the lyrics he wrote on Purple.

The artwork is softer and less chaotic than before, featuring the same stoic female figures and the familiar birds, nails and flowers. There’s a strange pattern behind everything, like a brain or a hunk of coral, which focuses the eye on the main figures. It’s interesting to note that Baroness could have gone for something more calm, less cluttered or more commercially viable but they chose to continue to refine the style they’re famous for. Ultimately, despite scaling back, there’s still room for their weirdness.

Yellow is a turn off the track for Baroness, but the risks bring rewards, and the rewards are many. This is one of their most accomplished releases, showcasing them not only playing to their strengths but presenting what does work in a digestible package. There’s plenty of weirder stuff to come, but on Yellow, they present their most attractive face. 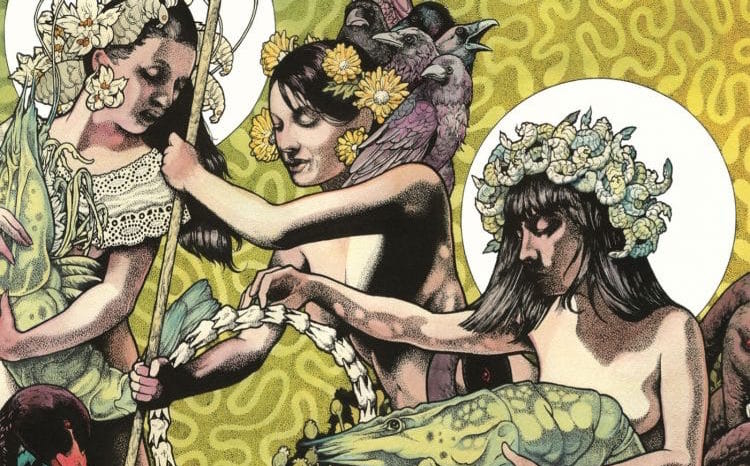