L.A. post-punk band The Wraith, which consists of ex-members of Blink 182, Lost Tribe (RVA) and Cinema Strange (LA), have released their debut EP entitled Shadow Flag. The Wraith’s sound is drawn from elements of 80’s UK post punk and LA deathrock. Comparisons have been made to Killing Joke, TSOL and Samhain. Internet and traditional radio stations all over the globe including the U.S., Spain, Mexico, Japan, Australia, UK, and Canada have been playing tracks from the Shadow Flag EP, giving them a worldwide following.

The Wraith, who made Cvlt Nation’s Top 10 Deathrock Releases of 2016 with their debut demo track “Comatic Romance,” have now released their Shadow Flag EP as of January 17th through their Bandcamp (available on Digital, CD and cassette). A vinyl release will be available in early March through Death Shadow Records in the U.S. and Symphony of Destruction Records in Europe. To support Shadow Flag‘s release, The Wraith will be touring the US west coast mid 2017, as well as playing Varning Festival in Montreal in September. Before you read my review, be sure to check out Oliver Sheppard‘s interview with vocalist Davey Bales for further background! Shadow Flag opens with what was initially The Wraith’s debut demo track, “Comatic Romance.” From the beginning we’re hit with a fast and dark 80s feel. Davey’s unique vocals give the song a reminiscence of Lost Tribe, but this has way more of an aggressive uptempo dark punk/deathrock vibe, no doubt brought on by the influences of the other band members (Colin Ambulance was in Cinema Strange and Scot Raynor was in Blink 1982).

“Barbed Wire Somber” opens with a beautiful guitar riff more mellow than the last track. In fact, there are several beautiful guitar lines throughout this one which have more of a postpunk/goth rock feel than punk. It somewhat reminds me of The Chameleons or even Echo and the Bunnymen. Throw Bales’ vocals over these and you have something magnificent and truly unique. This is easily my favorite song on the EP.

“Death Knell” dives back into the fast punk sound, but with plenty of heavy goth influence. The vocals are my absolute favorite in this. During the verses he manages to make you feel like you’re falling down a dark tunnel, but the chorus is more uplifting and even reassuring. The interludes without vocals are fast and even dance-y. It won’t surprise me at all to hear this track in particular getting plenty of radio play. It feels like a true goth anthem for the new age.

The EP finishes out with “Dolor,” truly a deathrock masterpiece that leaves a lasting impression. It opens with a soft haunting ambiance followed by high energy, almost tribal drumming and a spooky bass line. The guitar has an epic swirling 80s darkwave sound about it that never lets up for the whole song. This entire EP touches so many different corners of post-punk and related genres, it’s very difficult to pick a favorite. Shadow Flag is a must-have. 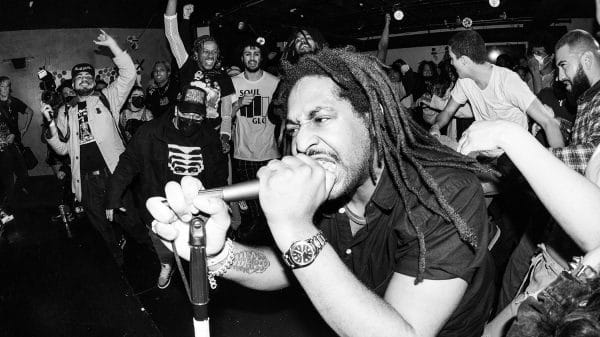