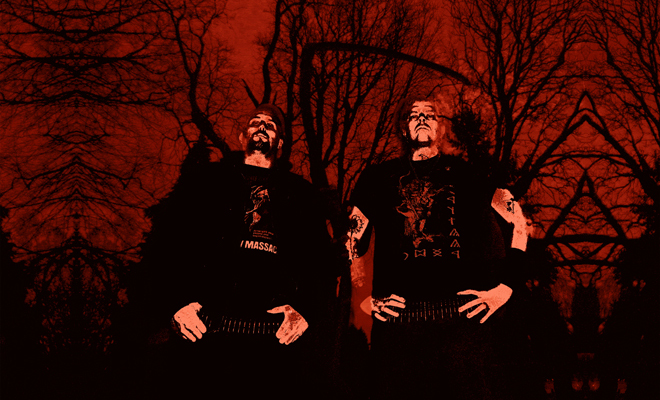 Portland’s Nightfell: A duo consisting of Todd Burdette and Tim Call. As of this writing, Nightfell’s debut LP, “The Living Ever Mourn,” is only available digitally, via Bandcamp. A vinyl LP is slated to come out soon on Parasitic Records & Southern Lord Recordings. “The Living Ever Mourn” is a genre-trouncing slab of murky, crust-influenced doominess with some surprising dark ambient, Gothic (in the classical and broadest sense of that term), and black metal flourishes that make it an especially stand-out release. The production, which pays special attention to the bottom end of the band’s sound, is exceptionally good.

The (few) reviews I’ve read of “The Living Ever Mourn” come from metal websites, who were drawn to the release because of co-vocalist and drummer Tim Call’s past with bands like The Howling Wind, Weregoat, and Aldebaran. I’m more familiar with the Burdette side of the band’s lineage; the gloom-heavy and modernized dark crust of bands like His Hero is Gone and Tragedy were on heavy rotation at my place ten or more years ago, and Tragedy’s last LP, 2012’s Darker Days Ahead, was also something I enjoyed immensely. Tragedy’s “Darker Days Ahead” was a mostly mid-tempo, Amebix-esque slog fest (with some pleasant nods to Killing Joke, even, that delighted me especially), and fans of that release’s downtuned, thick-as-fuck blackened gloom will no doubt find much to enjoy on Nightfell’s first LP here — especially on the opening track, the awesome “The Last Disease,” which opens with dramatic and dirge-like chord progressions very reminiscent of classic, Vengeance-era Tragedy, albeit with more ponderous and deliberate pacing.

The second track, simply titled “I,” is a nice dark ambient interlude that sets the mood with deep, droning synths and what sounds like processed, hushed vocal whisperings. Track 3, “I am Decay,” brings Call’s vocals to the fore; the song is a mid-tempo black metal affair with rapid minor note picking on the guitar, recalling the classic black metal of 90s Darkthrone or more recent bands like Sweden’s Craft. It should be noted that, as with all the projects that Burdette has been associated with, great care has been taken to ensure that the low end of the sonic spectrum is rich and well-defined. The downtuned guitars, rumbling drums, and hoarse-throated vocals of the two singers are fleshed out well in the production. Whereas so much hardcore punk focuses on trebly guitars, the snap of the snare, and the sizzling clatter of cymbals, the sonorous and robust production on “The Living Ever Mourn” will reward greatly those who have sunk a lot of money into their audio system’s subwoofers. The LP packs a hell of a punch. The fourth track, “Empty Prayers,” may be my favorite. It’s an unexpectedly dramatic and Gothic song, with chorus-y, layered vocals that remind both of Gregorian chanting and old heathen, pagan odes. Weeping, mournful guitars add texture to the tragic atmosphere of the song. There is, in fact, the creeping influence of pagan dark folk on the LP as a whole, especially on the second instrumental interlude, simply titled “II” – an acoustic guitar picks out solemn notes to melodic, but ominous, vocals. The song offers a bit of a breather from the LP’s otherwise unrelenting assault of black waves of deathy guitar distortion and crushing drums.

The penultimate song, “Altars to Wrath,” sounds as if it could be an unused song from Tragedy’s “Darker Days Ahead,” save for the double bass drum kick and Call’s vocals (which alternate with Burdette’s). “Altars” is again an excellent mid-tempo black metal-esque number drenched in inky black atmosphere and minor notes. And the last track, the appropriately-titled “Funeral Dirge,” is probably my second favorite song on the release, opening slowly and building to a tremendous, even militaristic, climax. Halfway through the song’s 8 minutes, Call’s drumming takes on a martial tone; a military snare tattoo seems to herald imminent warfare.

One of the tags on Nightfell’s Bandcamp page is “death metal,” and I suppose that is true given that many of the chord progressions and vocals recall the classic, early 90s days of bands like Entombed. The LP as a whole, however, deserves a little more credit than that. It’s an excellent marriage of blackened crust to mid-tempo black metal, with Gothic atmospherics laid on thick and heavy, to a darkly mesmerizing effect. In that regard, it’s perhaps similar to some of the things Atriarch have been trying to do, but it’s hard outright to compare Nightfell’s “The Living Ever Mourn” to any other single band or album.

Before I forget, it’s also worth noting that Nightfell’s LP was mastered at Audiosiege, the studio owned by Brad Boatright of From Ashes Rise and other dark hardcore bands that are a part of the family/orbit of the His Hero is Gone and World Burns to Death-type doomy punk bands. So, there’s that, too, for those keeping track.

Nightfell’s “The Living Ever Mourn” is highly recommended.

You can get “The Living Ever Mourn” here.