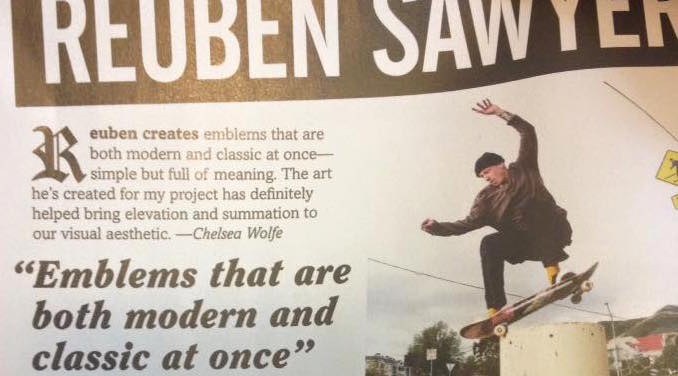 The world knows you as a killer illustrator and a rad musician, but not as a kick-ass skater…When did you first pick up a board?

My earliest recollection of skateboarding would have to be around the age of nine or ten. I don’t know what specifically drew my attention towards it. Maybe it’s because my dad was a surfer, but I’ve always been terrified of water. My first skateboard was purchased in Ohio on a family trip to see my grandparents on my Mom’s side. I have a vivid memory of learning to stand up on the board on this hill, which looks really long and barren in my mind, but is just the reflection of slow-sprawling Ohio suburbia in the winter. It had just snowed the night before, so it probably wasn’t safe to be rolling around on icy pavement. Luckily, it was one of those Walmart boards from the 90’s that had bearings that barely made the wheels roll and plastic trucks that were impossibly stiff. I’m sure I barely made it down the hill.

When you got heavy into art, did you stop skating for a while, and if so what made you pick it back up?

It’s kind of the other way around. I’ve always been drawing since I can remember, but I didn’t start pursuing art professionally until I had lost my desire to skateboard. I think skateboarding as a art form and movement had always been there, even when I wasn’t directly involved, because it influenced me as a person tremendously growing up. It turned my eye towards a entire subculture of people who were dramatically diverse in every way possible. I liked how skateboarding brought people together in a way that most “sports” or hobbies fail to see. It’s totally like the underground music scene, and sometimes they bleed together, but I think skateboarders stand on their own. It promotes a form of identity and self expression that is very fluid and comfortable. Sure, skateboarding in 2017 has gotten a bit more inflated by fashion and over saturated by social media, but it still remains inspiring. That is the point. I got back into skateboarding right before that huge wave of Instagram content became overwhelmingly popular, but it’s hard for me to put an emphasis of hatred onto it. I didn’t skate for 6 years, so I missed the transition period between 2006 into 2012-13 ish where skateboarding had a creative rebirth that absorbed all the late 80’s and 90’s style and trick selection, but streamlined it into this fresh modern take. Curb skating is cool again, street grabs and baggy fits. Some might say it’s played out.  When I stopped skateboarding, everyone had huge puffy shoes, tight pants, even tighter trucks, mechanical trick selection, just really sterile and almost tacky altogether. I definitely fell victim to some of these trends, but by the time I quit I was looking for something new in skateboarding. I just couldn’t find it at the time. I mean, sure, this wasn’t everyone, when you have something like skateboarding people are always pushing boundaries outside of the norm.

If you had to describe your skating style in terms of a musical genre, what would it be and why?

I don’t think I have an answer to that. Skateboarding and music, especially underground music, have always gone hand in hand. From personal experience, skateboarding expanded my musical palette through skate videos and friendships. Skateboarding is like musical improvisation: knowing when to ride the note out, change pace or completely deconstruct the movement into a skeletal form or complete chaos. The rules are subjective. When I see someone skate with style and power, it becomes its own genre in itself.

What kind of feeling do you get when you land a trick that you have wanted to learn for a while?

Well, since skateboarding is so physically demanding it can invoke a wide range of emotions. Anger, frustration, happiness, exhaustion – whatever. There is an entire ritual aspect to it that can be cleansing and equally destructive. I’m always trying to come up with ways to push skateboarding in new directions. It’s a basic reflection of my overall artistic personality. It feels great to accomplish a trick you worked hard for. Or maybe it came easy. The feeling is the same.

Can you ever turn your skate brain off, or are you always looking for shit to skate?

Never! Even when I wasn’t skateboarding for years, I still saw the world around me as being rich with things I could skate on. It never really leaves you. It’s a total addiction.

Why do you think so many awesome illustrators are also insane skaters? What is it about these two creative media that go hand in hand creatively?

Well, many would agree that skateboarding is an art form, not a sport. Both illustration and skateboarding require a heavy manipulation of the world around you. Both include people who are the true freaks in society. This is our world and we choose to bend reality how we please.

Do you like to have music playing while you skate?

Who are some of your biggest influences in the skate world?

Anywhere from Heath Kirchart to John Cardiel to Fulfill the dream-era Muska. Erick Winkowski is totally amazing. Dane Brady and Leo Valls break all the rules. Stephen Lawyer is on some other planet with the body varial and cross foot combos. Also Glen Fox! He’s one of those manic illustrator/skateboarder types.

What skate video had the biggest impact on your life?

Too many to list! Photosynthesis, Welcome to Hell, Fulfill the Dream, the old Transworld videos, 411 video magazine.

If you could go anywhere in the world and skate, where would it be?

Anywhere where people don’t know what skateboarding is.