Regional Justice Center Has Something to Say….Xclusive Interview - CVLT Nation 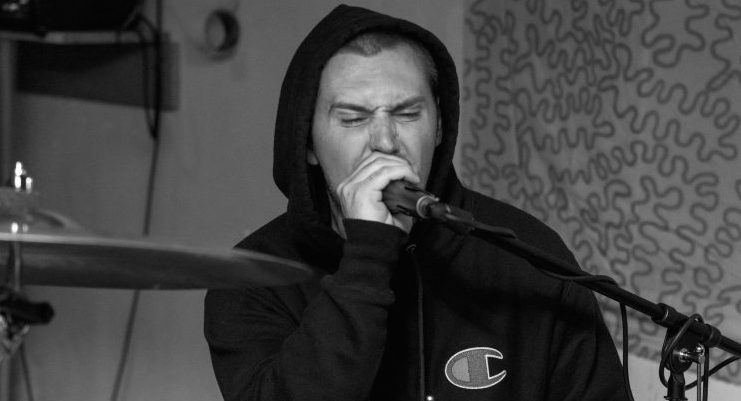 When we last caught up with Ian Shelton, the mastermind behind Regional Justice Center,  “World Of Inconvenience” had recently dropped. During the interim, it has squarely and forcefully demanded it’s place among my favorite records of the year. In fact, I’ve read nothing short of superlative-laden, glowing reviews. Living with an album this punishing and visceral is a task even as a listener so it demanded I follow up.  Ian was kind enough to catch back up with Cvlt Nation and discuss tour life, his myriad other projects, and Ringo Starr. Themes, lyrics, and real-life touchstones are thoroughly covered elsewhere should you care to read more here:

-How’s your brother doing? What does he think of the record?

“He seems to be doing well as far as I can tell, I went and saw him just after our tour with Ingrown and we just played cards the whole time, didn’t talk about anything serious, which was nice. He heard the record and the first thing he said was “it’s weird hearing my own voice”, he said his favorite song was “Class A.” Didn’t have much to say beyond that haha.”

-I’d imagine any art created through great struggle and vulnerability is difficult to navigate, having to relive it and confront it nightly on tour. How has that been for you? Has your relationship to the songs changed as they’ve had the chance to exist in the world a bit?

I don’t think my relationship to the lyrics has really changed at all honestly. I’m very much about forward movement so at this point I’m thinking about the next set of things I’m trying to say.

-No slight to any other bands, but there’s oftentimes a vagueness/insincerity to the anger and frustration espoused by vocalists. One of the reasons “World Of Inconvenience” is so intense and visceral is because it’s informed by an authenticity and life events happening in real time. How does that affect the performance? Assuming this is certainly not your first project, how does it differ from past experience?

“It’s really easy for me to tap into anger when we play live, I usually feel like something isn’t all the way right and I’m getting the adrenaline pumping by hitting drums and yelling but I don’t think I get any time to articulate thoughts about whether or not the real life bleeds into that. I’ve been hearing lately that people “don’t feel good” after our set because the whole thing is abrasive and we play the SoundClips from the record in this loud imposing way, and I think that conveys everything I want.RJC differs from all my past projects mainly in the fact that it’s uncompromisingly my vision. All of my previous bands I would try to lay out these big plans that to me were predicated on the fact that the whole thing needed to be done to work, and then my band members would end up doing half of my idea and then calling it a failure. This was my first time carrying something to fruition 100% and it’s felt great to never have to pivot to some lesser version of an idea.” -Listeners tend to find common ground with emotionally bare and daring artists. Personally, it immediately touched a place in me that’s seldom reached. Has the album created any meaningful connections or been the springboard for interesting dialogue with listeners?

“I’ve been surprised by the reaction to the record in finding so many people who had almost identical circumstances. Growing up I always gravitated towards artists that would talk about how fucked up their family lives were because I related and it’s interesting to find to some degree now people are doing that with my material. It’s been comforting and scary honestly, I feel like most people who reach out and talk about it don’t have a positive ending to their stories but maybe putting all of this to the forefront of this project could maybe cause someone to reflect in a different way. I think it’s unlikely but I can only hope, haha.”

“I’ve been writing a lot recently, I have 5 new songs. I don’t want to over share about the project now but Max will be involved in writing lyrics for the record. I have a specific lens I want to explore everything through and have us lyrically write the record half and half as well as some more interview style stuff. The thing I really want to focus on is not having it presented the same way as the previous record so it can be an entirely different listening experience. I plan on recording it in April and having it out Early 2020.”

-I can’t imagine that existing in the world of Regional Justice Center exclusively is a sustainable artistic model. What’re some bands/projects you’ve been involved with concurrently or in the past?

“Currently I am also in a band called Seattle’s New Gods, we just released an LP called Burnpile and are going on a 2 week tour coming up with Drug Church and Gouge Away. I’ve been involved with Seattle’s New Gods since 2013 and besides RJC it’s definitely the project I’m most proud of. As far as other projects, right now I’m just directing a bunch of music videos and slowly working on some narrative projects. Trying to get as many things as I can done between all these crazy ass tours haha.”

-Shamefully, I missed discussing the year’s best album art. Am I right in gathering that it’s a piece by Mark McCoy? How’d that come together? “I’ve always looked up to Mark and his art and loved it so I decided to email him and see if he was interested in doing the LP cover. Initially I didn’t hear back for probably a month so I moved on and started talking to some other artists but eventually he got back to me and luckily no one had started any work yet. We talked on the phone once and he outlined some general ideas and then he worked on it for a couple weeks. I’m glad it worked with him, I couldn’t imagine it any other way now.”

-In the album description on your label, the amazing “To Live A Lie” Records, the influences are as varied as Crossed Out and, uhhhhh, The Beatles?!! I’m having trouble finding the through line, ha. Help me out. Speaking not on influences for sound, but what are some of your favorite bands and other influential media (art, film, literature)?

“I was hoping someone would ask this question sooner but sadly it seems most people missed that part! The Beatles are a huge influence on me, I didn’t start listening to them until a couple years ago when my friend Aaron texted me and said “it’s time for you to get into the Beatles, here’s where you start.” My parents didn’t listen to it at all growing up and I thought I was too punk for it entirely too long. There’s a couple parts on the record that I know to be descending from The Beatles influence but the main way it ends up being in the write up was that the drum part during “Community Standards” is largely taken directly from Ringo Starr on “The End”. The next record will have even more things lifted from The Beatles and classic rock in general so I wonder who will be able to figure it all out.

I have trouble playing favorites overall with music and movies because I mainly just get deeply involved with whatever I’m into at the time. I would say some of the things I come back to more often than others are Guided By Voices, Infest, Crossed Out, Sun Kil Moon. I largely like prolific creative dictators. I don’t care if every record is good, I just get hooked. I am constantly watching movies but again, it’s largely just obsessing on whatever I’m into at that moment. I feel like when I try to think of favorite movies what always comes to mind is Time Bandits, Punch Drunk Love and Boyz N The Hood. I’ve watched those movies more than any others.”

-I hate to put you on the spot, but here goes: What’re your Top Ten Records? What’re your favorite new bands we should check out?

Top ten records of all time is too tough!! Instead of all time I’ll just do my top 10 recently synched to my phone haha.
Napalm Death – Harmony Corruption
Jay Rock – Redemption
A Savage – Thawing Dawn
Parquet Courts – Wide Awake!
Woolworm – Deserve To Die
Fearing – A Life Of None
Plutocracy – Dankstahz
Crass – Feeding of the 5000
Tony Molina – Kill the Lights
Assuck – Misery Index

“We have a live tape that will be out on Alternatives Label in 2019. Europe with Harm Done in October, East Coast with Fixation in November and a trip through the south to get to FYA in late December/early January! New LP in 2020 haha.”

-How can people keep up with you and what you’ve got going on?