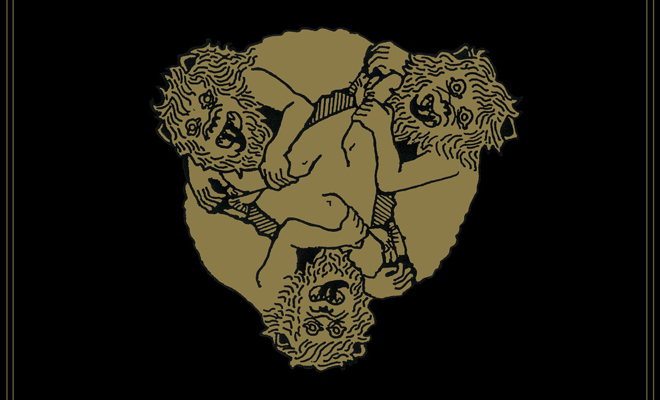 Vilkacis is the solo project of Mike Rekevics – perhaps better known for his drum work as part of California black metal/drone ensemble Fell Voices – and so far has seen just one release, last year’s EP The Fever of War, which last month saw re-release through Dead Section Records. Vilkacis purveys a freezing, lo-fi black metal augmented by epic guitar riffing and yawning, atmospheric chasms – a step away from the bone-numbing frost of Rekevics’ previous work with Fell Voices and Ash Borer, and toward the grim bones of early black metal’s more atmospheric-minded moments. If Darkthrone’s ‘En Vind Av Sorg’ was a moonless winter night, Vilkacis’ ‘Freezing Hell’, The Fever of War‘s opening track, is the following dawn – with Rekevics’ guitar slowly but proudly rising over the snow-shod landscape set up by the band’s rhythm section. Throughout The Fever of War, the instrumentals are hypnotic and massive, and the gritty production compresses them into a chill-inducing, intricate wall-of-noise that seems to rise over whistling wind. There’s little room for frivolity on this record, with the barest hint of folk on ‘Wolf’s Eyes’ vanishing into white gloom, and ‘Sentinel At the Gate’, an airy synth piece, adding space to its scope by allowing the notes to fade into silence. What little melody the guitar riffs offer is just a gateway to the hypnotism The Fever of War drags the listener into.

Perhaps what’s most striking about The Fever of War, however, is Rekevics’ marriage of his work on more ambient-minded black metal with the all of the accoutrements of the genre’s Norwegian days. The instrumentals are dynamic, but repetitive to the point of hypnotic, and make no room for Rekevics’ gruff roar as it appears and vanishes just as quickly, lending them a sort of proclamatory element that wouldn’t be out of place on an early Immortal record. ‘Wolf’s Eyes’ has the drums fall away from the guitar/bass duo, dragging the listener through a soaring blizzard before returning to the ground again. The aforementioned ‘Sentinel At the Gate’ mixes Paysage d’Hiver-like soundscapes with the meditative, ululating drone of Fell Voices.

There’s a bizarre stillness that takes hold as the band continues – almost oxymoronic when the instrumentals, which are bold and strident, are considered. But as they paint their bleak picture, slowly enfolding the listener in frigid layers of snow and grandiose atmosphere, it becomes clear that despite the belligerent title of The Fever of War, Vilkacis distances itself from the precocious violence of black metal, preferring instead to marry the past and present of black metal into a unique affair that can only become more fascinating.

Fever of War is now available through Dead Section and Psychic Violence Records.