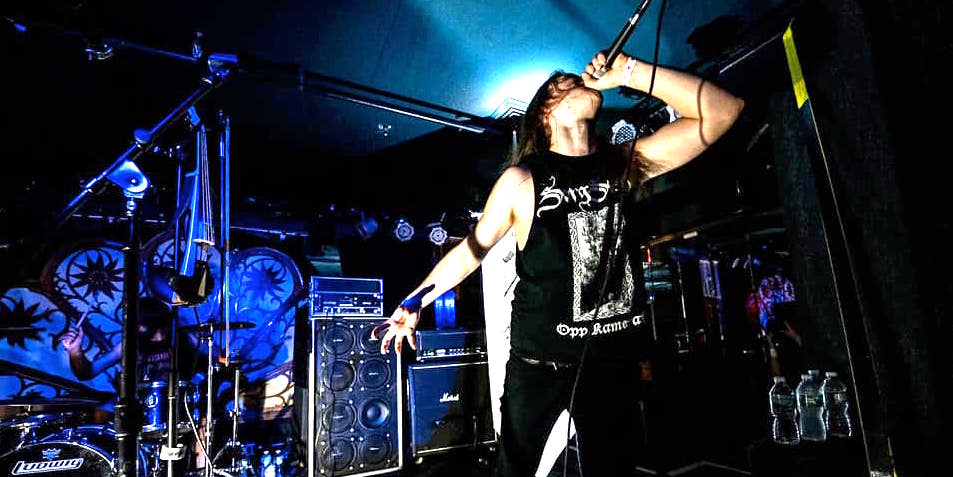 From Liverpool come the mighty Dawn Ray’d, delivering unto us their second full-length platter in almost as many years. They formed in 2015 to bring their particular brand of atmospheric Black Metal and Leftist politics. A three-piece, they manage to sound almost larger than bands like Dimmu Borgir, who seem to have a hundred members. Dawn Ray’d have made their name with their unique blend of Black Metal mixed with their political message, as well as including a violin that adds many shades of harmony, and a folk element that further grounds their already earthy sound.

Behold Sedition Plainsong is more of what they’ve given us in the past. There are no real deviations here from their core sound. You get Black Metal, you get rumbling drums, you get folky parts with the violin and more classical parts featuring that same instrument. Simon B., who sings and plays the violin, delivers more of his patented shrieking and singing. His vocals are raw and honest, especially when he sings on the very few clean parts. Some have chided the weakness of these clean vocals but I always found them refreshing and honest in their frailty. He really puts it out there, unafraid of any backlash. This album continues that tradition.

There are some really fast-charging moments on this record. Don’t be confused and think it might be particularly slow or trancy, even though it has plenty of those elements, as well. No, this record is kind of all things Folk Black Metal. There’s acoustic passages accompanied by the violin that will make you feel like you’re sitting by a fire in a field at night, drinking with good friends. There’s blistering leads and tumbling percussion on other songs that will make you feel like you’re charging headlong into battle in a berserker rage. All of this is delivered with passion and care and craft.

As for the politics…There’s no avoiding them here. You probably can’t understand what is being sung without the lyric sheet, so you won’t be offended at something you hear said. However, the band does not shy away from their Anarchist leanings. These guys are Left, and not Left-Handed Path left. And they will let you know right up front. So if this is an issue with you, then you might want to give this a wide berth. If not, dig right in because you’re going to get an incredible record full of variety and heft.

Behold Sedition Plainsong is nothing new from the band, but only two albums and one EP in, there is really no need to shake things up or do anything different. Dawn Ray’d are refining their sound and their style, perfecting it. This is an excellent record for the autumn months, and, for that matter, the rest of the year round. One of my contenders for Album of the Year.