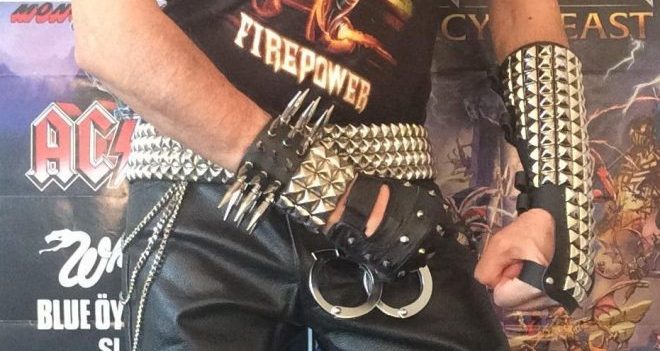 When we think of “gay” in terms of metal – if it is not being used in an unflattering context – it is referring to one of four or so musicians (sorry, but King’s X is not metal). Does that seem like a small percentage of metal musicians? Yes, though you have to take into consideration the most recent Gallup poll found 4.5 percent of Americans identifying as LGBT in some fashion. Metal is a world-wide community, so pulling from every country, none of which are likely to exceed the US’s speculated 11 million members of the LGBT community. Factor in that the number of people in said LGBT community who listen to metal is even more marginal. Now you’re thinking, “wait, how do you know this?”

I am the B in LGBT. And no, I am not claiming to be the totality of all bisexuals. As far as bisexuals go, I don’t really fit in any neat stereotypical boxes. I am no different from anyone else, in the fact that when it comes to sexuality, I fall somewhere on a spectrum, rather than being an instant queen, just add sparkling water. Despite the fact that 80s metal videos were my gateway drug into the leather scene, of all the gay men I hang out with, I have only one other gay …um, friend… who listens to actual metal. A couple max out on heaviness around Tool, but there’s only one who can get down with Watain. A far larger number bond with me over Depeche Mode, David Bowie, Siouxsie and the Banshees and Sisters of Mercy. If this seems like a shocking revelation to you, then you never hang out in gay bars.

Oh right, I just outed myself to you guys after writing for this blog five years. I guess you need me to explain this in a little more detail. I have alluded to it in my writing on kink, but never spelled it out for you. Why would I? It factors in more when it comes to kink. When I am giving my thoughts on the new EP from a post-horror blackened doom symphony, where I put my penis doesn’t matter. The only way it colors my musical taste is that I majored in musical theater. This means I prefer actual singing to death metal howling. Prefer… but I need my guttural growls upon occasion. Once again, if you have read my thoughts on music before, this is no revelation.

I like to think if I was a full-on queen I would be gay like Gaahl. From the outside, all you see is the aura of Satan and the threat of me making you drink your own blood. Judging from pictures of guys I have seen him with, we seem to have similar taste. I am sure just from the way I gush about Morrissey and David Bowie, it makes perfect sense to hear down that road that I prefer my men with an air of androgyny and on the femme side. Aside from the previously mentioned icons, my other musician crushes would include Brian Molko of Placebo, Chris Isaak and Nick 13 of Tiger Army. I have a type; guess we can call it gothabilly twink.

Why does my type matter, you may ask? Because my type doesn’t cross over into my metal life. At a goth club, maybe, but I am not into guys with long hair. Nor am I into burly guys with beards. I am a burly guy with a beard, why would I want to have sex with myself? Metal is compartmentalized to my hyper masculine side. It feels that way, energetically. Metal comes into play with this part of me because it stirs a dominant energy. I listen to it when I lift weights, and listening to it stirs up the way I like to engage my sexual partners. Male or female, I treat them with equal sadism. Some people ask if I like playing with guys because I don’t have to hold back. My reply is, “Honey, I like my beer cold and boys flaming, so no, they don’t take it any better.”

Reflecting on the high school years, I commonly say, “I was too goth for the metal kids and too metal for the goth kids.” This could also be a metaphor for how I fit into non-leather culture gay or straight. Too straight for the gay boys, too gay for the straight boys. This results in most of my “vanilla” friends being girls, because they don’t give shit. Obviously I am not in the closet about any area of life, since I put it all out on the inter-webs for the world to read. In terms of the straight metal head crowd I hang or play music with, I never bring it up. In the past when it has come up, they assume I am trying to get in their pants. Then when I explain they are not my type, it makes them insecure or question their own sexuality and say “Do you think I am ugly?” to which I then have to reply to be honest I just don’t think of them at all unless I am listening for them to get the fucking bridge to the song right.

To answer the question, where are all they gays in metal? Right where we have always been. There is just no need to bring it up because we are either not interested in you or we don’t want to have to go and find another drummer because you made things awkward. Oh – but you are bi so you don’t understand my struggle, you say. Listen sister, how about you turn back the clock to 1993, go on tour with a death metal band and then try hooking up with some guy at club without the rest of your band knowing, and get back to me on that. Granted, none of us would be where we are today with out some drag queens on the morning of June 28th of 1969 at the Stonewall Inn in Greenwich Village told the cops, “Fuck no, We are not taking this bullshit anymore.” Thus, the reason Pride falls on that day – to commemorate, and not just an excuse for you to do Molly in booty shorts.

On my own journey to get where I am today, it took a great deal of drugs, alcohol and therapy to thicken my skin and make me ok with being me. In my 40s, I do not give a half a shit of what anyone thinks. So if you are ever wondering why I don’t waste my time bickering in the comments sections of publications I write for, it’s cause I don’t give a shit what you think about what I have done or what I do with my penis. In 2019, things are much easier than – to put it very fucking lightly – the inopportune situations guys and girls like me got into in the 80s and 90s. Is there still a long way to go? Yes. But that is what metal is for, the perfect soundtrack to an imperfect world. Despite all the variations of queer not being openly embraced in the metal scene, I do find some solace in knowing that every time I see a band trying to be macho men in spikes and leather, the joke is on them, as that look was brought to them by a Daddy in the 60s. STAY PROUD, STAY METAL.