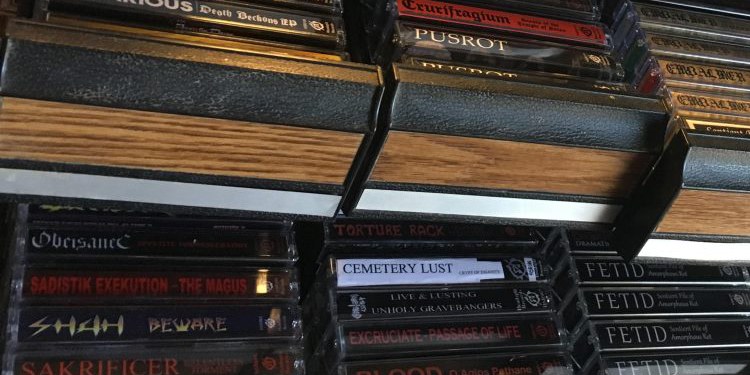 If you like your metal putrid, grimy and free of frills, then you owe it yourself to fully immerse your mind in the bowels of Headsplit Records’ catalog. For over a decade, it’s been home to some of the most satisfying extreme metal releases in recent years, almost all of it on tape. Headsplit has put out so much quality stuff, it’s difficult to even settle on a short list to mention: Phrenelith, Sakrifier, Vomit Angel, Nekro Drunkz, Encoffinized, Torture Rack, Witch Vomit, Rude, and so on. I could fill this article simply by listing amazing albums Headsplit has released on tape. Along with its own releases, Headsplit is also one of the US’s best tape distros, and puts out one of the best physical zines still being printed. Based here in Portland, OR, Headsplit is pretty much a one-man enterprise, and emblematic of Portland’s DIY attitude towards extreme music. Check out our interview with main-dude Dylan below. If Headsplit had a mission statement, what would it be?

Started originally just to release stuff for my bands, but quickly I realized I wanted to put out stuff for other bands that I enjoy. Ever since getting into metal music, I’ve always supported the underground and the bands who rip, so this was pretty much the next level of die hard fanaticism!!!! It’s not healthy behavior!!! How do you decide what to put out?

Why are tapes your preferred format?

I’ve always bought and liked tapes the most since the first days I was getting into Metal. I’ve always had a stereo with a cassette deck or a car with a cassette deck. I like the layouts and the durability of the format. To me, it is not a hipster thing like some tend to immediately think – NO!! Extreme underground metal was born on cassette, so it’s always been there, they’ve never gone away fully. It’s just another means to listen to and enjoy the Fukkin music!! I buy all formats, but who the hell cares? Do what makes ya happy, ding dongs! But if you’ve seen/listened to any Headsplit tapes then you already know, they sound and look good! So, there’s nothing to lose for taking the chance on a good ol’ Headsplit tape terror!!!!!

How many people are involved in the label?

It’s mostly just a one-man operation as far as shipping and dealing with releases and what not. But, I’m lucky enough to have this crazy fukker named Rob Drokker who helped with all the media files/ layout/ design and flyers. But he’s retired and currently he’s stepping away to peruse other interests in the Horror/Mask community. Lately I’ve had some extra help in the design department from a true metal freak named Scott (last name left out for security reasons… for your security, the reader that is). I can’t forget the mighty and notorious Baphometic Fannypacker who helps with hanging all the flyers for local gigs that Headsplit is involved with. Watch out for any/all of those people, they are crazy and on edge and have the metal sickness bad! Many bands on the label are from Portland; is that because it’s more convenient to hook up with local bands, or is representing the local scene something you go out of the way to do?

I’m pretty sure by now it is no secret that Portland is a hotbed for quality underground extreme music. I’m lucky enough to have been born n’ raised here, so naturally I wanna support the locals as much as possible. All the local Headsplit bands simply crush regardless of where they are from. I would’ve tried to put em out if I wasn’t from here, is what I’m sayin’. Lots of sick shit from Seattle right now too, Acid Feast, Caustic Wound, Mortiferum, Fetid, Crurifragium, Cerebral Rot, Effluvia is back in the mix. Nice to have that pool of psychos close by to have play & attend shows!

I see Headsplit promote local shows/set up merch tables there, etc. – are you involved with the booking/setting up a show aspect with bands on the label?

I book a fair amount of shows, if the lineup falls into place well. I don’t want to bother if all the bands I have in mind aren’t able to play. Each show I do is meant to have a good flow to it…a flow of Vomit!! While there may be a Headsplit Presents attached to the flyer, obviously these events are all about the bands of course. As far as merch tables at other shows, I just bring in my two cassette brief cases and the maniacs come like flies to shit! I love a little shit myself, so we all have something in common!!! Once you sign a band, do you assume you will put out more from them, or is it an album-by-album thing?

Yeah, usually if there is an initial interest, then I’m in for the long haul. For example, I will be releasing the new Witch Vomit and Torture Rack cassettes soon, they’ve been on since the early days of the label. Also set to do the cassette version of the Fetid and Encoffinized full lengths. I think there’s a new EP coming from Sakrificer as well!

How do you connect with other labels for distro items?

Just emails and word of mouth. Theres a solid group of people who stock my titles/ I trade with frequently & respect: NWN, Hells Headbangers, Caligari Records, Lycanthropic Chants (Currently the main distributer of Headsplit stuff in Europe), Diabolic Force, Defiled Graves, Dark Descent, Obliteration Records(Japanese Headsplit distributor), Underblog666 (Australian Headsplit distro). Special shout out the the nit wits who come up with the international postage prices, Fukkin hell!! So, if you live outside the USA try to buy from one of my distributors.

One thing that stands out about Headsplit is the New Release Bundle Packs; are these good sellers? Do you set a certain number of tapes aside for the bundles, or does the bundle go away once an individual title sells out?

Once one tape is gone, then the bundle of death goes away! This is the most bang for your buck, I keep things dirt cheap as it is already. The Fetid/Encoffinized/Extraneous bundle was a great pairing and went pretty quickly. The packs are a great way to save money and be exposed to bands you may be unfamiliar with… again, what do ya have to lose?!!!!

You’re on your tenth issue of Headsplit Magazine — how has the reception been?

The 11th issue is actually out now! It’s tremendous. The 10th issue was a milestone and came with a compilation CD. The 11th issue comes with a patch while supplies last. Zines are pretty much dead, the ones that exist rarely stick around past 5 issues. It’s important to me, and a lot of other maniacs as well, to actually hold something in your hand and read, rather than stare at a screen any more than we do already. The future of the zine is always uncertain, it’s a lot of work,  so stay tuned. Is there a resurgence in ‘zine culture going hand-in-hand with the popularity of tapes?

There appears to be some, but like I mentioned before they don’t seem to last long or be that consistent. Which is fine, I don’t blame anyone for not wanting to continue the absolute insanity that goes into putting together a zine, goddamn!

Is this (Tapes, ‘zines, vinyl) all nostalgia, or is there something about these forms of expression that’s vital and missing from digital/internet culture?

They are what they are. None of this is nostalgic for me, I just do it and some people support it. Like I said physical releases are always the best. Try to stay offline folks, it’s getting harder and harder. There’s just so much negative shit that’s surrounding shows/tours/ bands these day. Get out and Fukkin support what you like, and if you don’t like it, then just stay home and listen to whatever churns your butter!!!

Are there any specific Headsplit releases that stand out to you as favorites?

Everything I’ve put out has been released because I Fukkin dig it! Some of My favorites are Infester, Torture Rack, Witch Vomit, Fornicator, Decrepit, Rademassaker, Obeisance, Nefarious, Fetid, Blood, Sakrificer… fuck, it just keeps going, just check ’em all out, godamnit! 120 deadly releases to turn your brain to mush!!! If it’s on Headsplit, it AIN’T horse shit!!

What’s coming up that we should get pumped about?

Up next on cassette:

Infester – “To The Depths, In Degradation” Thank you so much for taking the time to answer these questions!

Catch the putrid filth that is Headsplit here: 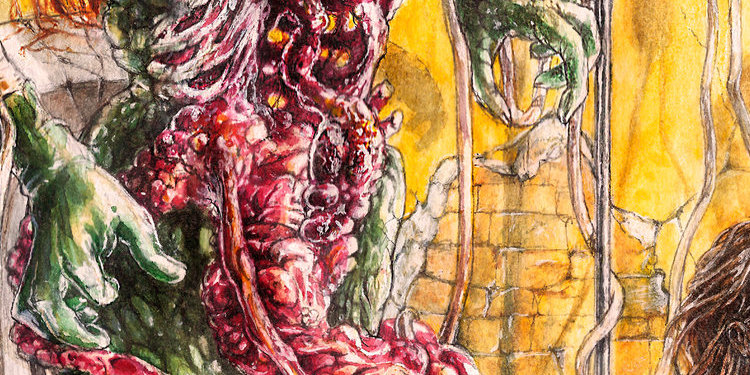 Just when I think I’ve seen and heard everything sick that could come from a human orifice, Nekro Drunkz is here to shock me with... 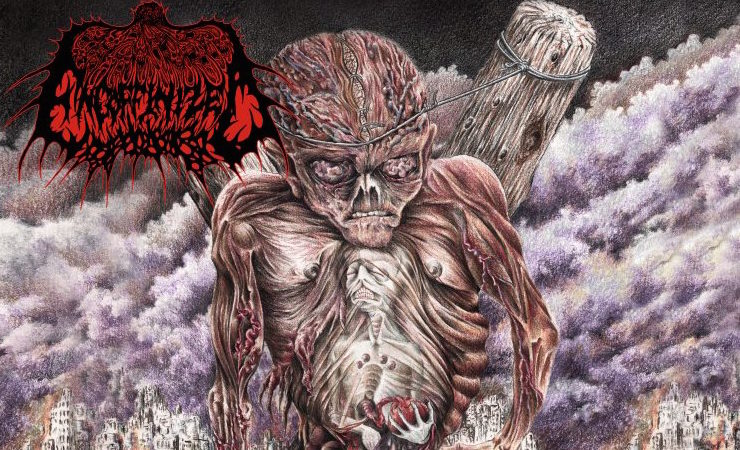 Listen to the Sonic Savagery of Encoffinized’s “Chambers of Deprivation”

Calling all fucking Death Metal undead – are you ready for the new Encoffinized album Chambers of Deprivation that comes out on Feb. 15th...