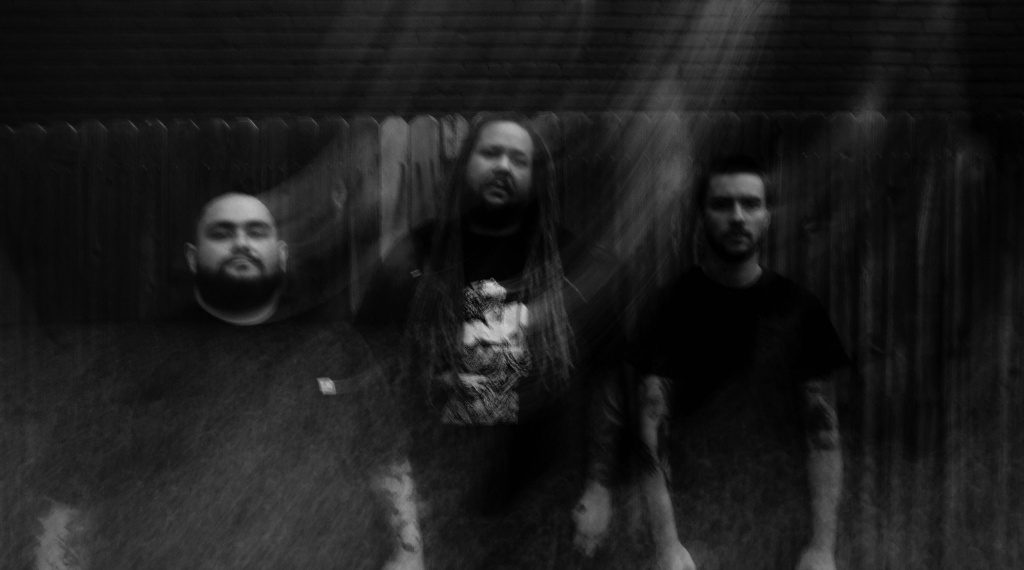 The first week of April, 2017, Primitive Man enter into the Flatline Audio for what has now become their latest full length opus entitled Caustic which was released last fall on Relapse Records. Due to a schedule opening, Dave Otero at Flatline had an extra day available for recording and the band went back into the studio to create a noise record entitled Steel Casket. These two tracks bring new elements into the fold including more ambient/drone interludes that help carry the harsh noise walls into longer sustained passages.

Now, the band announce a split Lp with New York City’s Unearthly Trance. An exercise in complete and total suffering, coming August 17th via Relapse Records. Across seven apocalyptic tracks, both bands tap into some of the most uncomfortable, vile realms of blackened doom and dissonant, harsh noise put to tape in the new millennium.

This is the interview with Ethan Lee McCarthy (Primitive Man).

Let’s talk about Steel Casket. Can you describe this new work?

It’s just dark ambient stuff. We have done some noise and dark ambient stuff on our regular releases, only in a smaller capacity. We also put out a double LP of stuff like that before, but it was a little harsher. So Steel Casket, like I said before, is more of a dark ambient record than a harsh noise record. It originally came out digitally because we had some van issues right before we left on tour with Weedeater last spring. So we put it up on the Internet and raised some money. Now it’s just finding a physical release.

In my opinion, Caustic is one of the best metal albums of 2017. Are you pleased about the response of the audience?

Yeah, it’s been really nice. We haven’t played anything but songs off Caustic for these last few shows that we’ve done and I’ve only heard two people complain, so it’s been OK. Just people at shows. I had a guy last night get really upset with me because we didn’t play anything from Scorn.

What do you think about the metal scene these days?

The new split will be out on August 2018. Why did you decide to start this collaboration between Primitive Man and Unearthly Trance?

Been a fan of Unearthly Trance for years.  We have played a few shows together and the idea came up in conversation and it took about 2 years or so to come together.

How was the process of creation of these two new songs?

We wrote and recorded our songs during the Caustic-era sessions.  These songs could have ended up on the album but we thought sonically, it was much different than the others and would be better on the split.

What did it mean for you to collaborate with Unearthly Trance?

It’s cool to do a split with a band you have been a fan of for so long.

When did you write “Naked” and “Love Under Will”?

One song is about how humanity is in its twilight.  The other is about using your will to manifest your desires into the physical realm.

What plans does Primitive Man have for the rest of 2018?

We’re doing a European tour in October. We probably won’t do any touring again until we have a release out. We’re just going to write a record and work on that.