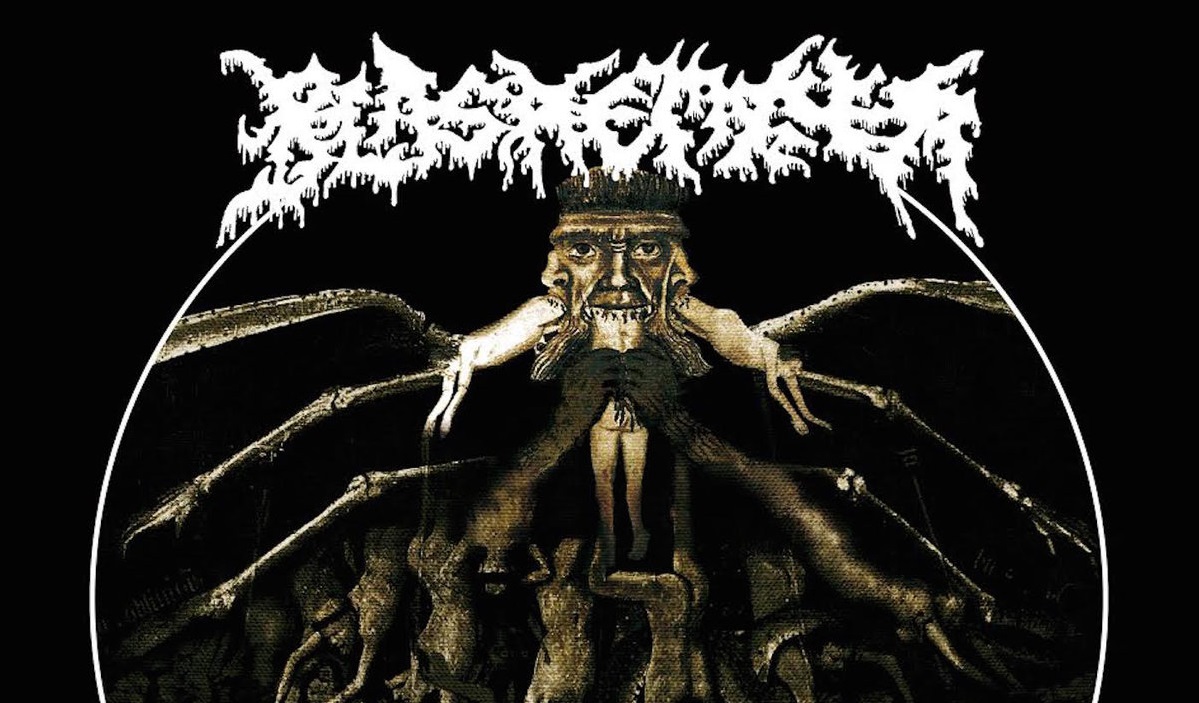 The term “tried and true” is not necessarily a bad thing. It is often used as a way to describe something that has been repeated, over-used and run into the ground. Something that has played its course and has been worn thin. On the flip side, the term can be used in a completely different context to describe something that is solid, strong, and reliable. In the case of Los Angeles natives BLASPHEMONGER, this is exactly how I would describe the hellish form of old school blackened death metal that is found on the band’s debut EP, Impaled Beneath the Pentagram, 6 tracks of devastating brutality unmatched by any modern death metal in recent years.

Impaled Beneath the Pentagram hearkens back to the good ol’ days of American Death metal, taking everything that was good about Obituary’s mid paced grooves, blending them with churning, Morbid Angel riffing and Chris Barnes-era Cannibal Corpse growls, all while adding a touch of blackened ferocity ala Incantation. Written and recorded over the course of two days, with the first session being the first time that the band had ever played together, you get a sense of the talent and craftsmanship honed by the two sole members behind the project. One being Necrodiety (guitar, vocals), known as a prominent member of the USBM underground with several releases through well known underground labels such as Tour De Garde, Altare and Les Fleurs Du Mal productions. The second is Blastmonger (drums), who has been known as an active member in the LA metal scene for decades, touring and recording with many well known acts. Unfortunately not much else is known about the duo, but the anonymity adds to their allure. Now don’t get me wrong, I am a firm believer in the old saying “comparison is the thief of desire,” and it is not my intention to remove the originality from the hands of BLASPHEMONGER by comparing them to the greats, but instead imply that this entity is of the same caliber as the ones who pioneered the sound. This is most definitely the good stuff, folks. The Crème de la Crème that you’ve spent all of your time searching YouTube and torrent sites trying to find, but never can.

Running at roughly 19 minutes in length, Impaled Beneath… delivers on all levels, staying true to traditional death metal by utilizing straight forward, barbaric riffing, blasts beats and guttural vocals while avoiding the atmosphere and gory imagery that has become commonplace with more modern bands. The EP opens with “Perversion Towards the Cross” and “Ripped From the Womb,” two pummeling and visceral offerings that set the tone for the entire release. “Disemboweled Priest” cuts quickly, bringing razor sharp riffs and blasting ferocity. The insanity continues through “Trench Holocaust & Napalm Raids” and “Luciferian Transcendence,” before closing with “The Curse of Human Form,” a perfect amalgam and summation of all of the devastating traits that make this band (and release) more than great. BLASPHEMONGER brings forth all of the best elements from the old school and incorporates them into their own sound, staking a claim in the modern era of death metal and sitting at the top of the mountain with the big boys that shaped the genre into what it is today.

Impaled Beneath the Pentagram will be available as a limited edition cassette in mid December through Les Fleurs Du Mal Productions.