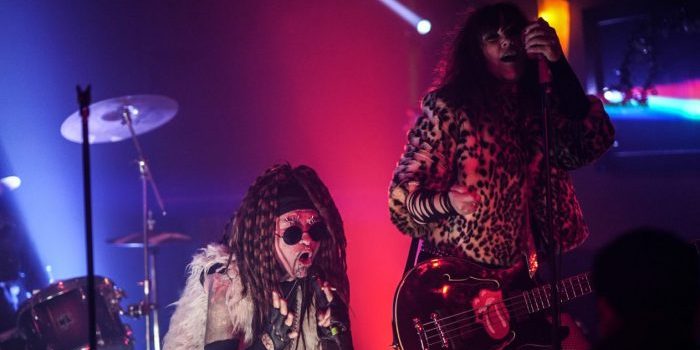 Today we present you the premiere of the new video for ’20th Century Boy’ by Beauty in Chaos feat. Al Jourgensen. As you may expect with any performance by Uncle Al, the performance captured here gives every indication that he’s still a firepot of energy and alternative bliss, supported by a musical team who is no less enthralling to watch. With musical production this perfect and a track as timeless as this T. Rex classic, Jourgensen’s involvement is the icing on the cake to what is certainly a superb colorful video. All of these factors definitely make you wish you were among the lucky souls in this intimate crowd.

This album, which just released via the LA-based label 33.3 Music Collective, features almost 80 minutes of music, curated by guitarist Michael Ciravolo on deluxe CD and limited-edition heavy weight, colored vinyl. Finding Beauty in Chaos is now available on CD and digitally, including on iTunes, Spotify and Bandcamp. CDs and vinyl can be ordered from the Beauty in Chaos website at https://www.beautyinchaosmusic.com/music-store. Al Jourgensen had this to say: “The Beauty in Chaos project is a tribute to both community and family and what I think is lacking in the music industry these days. It’s an honor to be a part of this great line up! At 60, I never thought I’d be singing “I’m your Boy, I’m your fucking Toy”, but maybe all the AARP discounts are helping me stay young”.

Michael Rozon shares some words: “I spent an amazing day drinking wine and shooting the video for 20th Century Boy with my dear friends Michael and Tish Ciravolo and the inimitable Al Jourgensen. I initially met Al while we were recording his vocal for the song, our shared interest in Jaguar cars and old country music (and wine) sparked a wonderful friendship. He offered me the opportunity to engineer and mix the last Ministry record “Amerikkkant”. Quite an honor for me as I view Al as having been a true architect of sound. We are on track to record the new Ministry record in February 2019”. “Working again with Beauty In Chaos and Michael is always a pleasant adventure. Out of the 3 videos we have done, each has been a completely different visual approach specifically designed for each song. When Michael told me that there might be a possibility or working with Al Jourgensen, I became severely excited as I was always have been a fan of Al Jourgensen and Ministry. When we made the video we wanted to go with a raw feel so we decided to film in a seedy bar and have a high energy performance, and Al Jourgensen and BIC did deliver! I think overall the video is a great success and is another beautiful addition to Beauty In Chaos’s visual imagery,” says Vicente Cordero.

Beauty in Chaos mastermind Michael Ciravolo reflects on this track and Al Jourgensen’s involvement: “To me ‘20th Century Boy’ has one of the greatest guitar riffs in rock n’ roll and Marc Bolan was an amazing performer and songwriter that influenced so many. It was a song I always wanted to cover, and finding out Al was also a T. Rex fan turned on the light for me to do this on FBIC. Ironically, my now wife Tish and I’s first real date was seeing MINISTRY at Lollapalooza in ’92. They were simply brutal and what a sonic assault!  We both became big fans. Fast-forward 25 years and Al is sitting in my studio singing and blowing harp on this song! Tish and I sharing the stage with him in this video was pretty special and it shows that you never know where life will take you”.