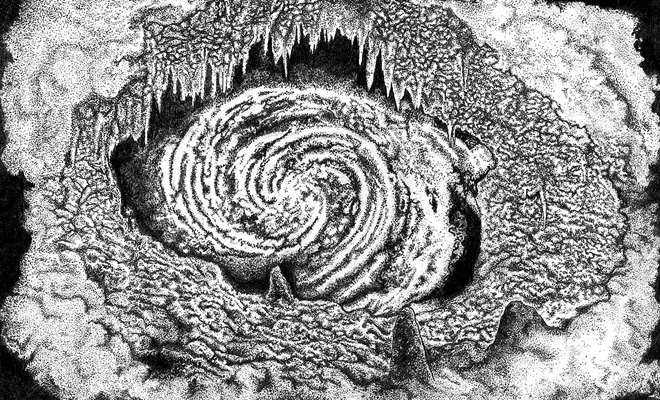 Lurking somewhere within the borders of New Mexico is yet another hugely exciting new project; a project that leaves behind any trace of affectation and theatrical pomp, delivering dense and primordial black metal with a sound as vast and cavernous as the indigenous landscapes. Boasting members of Drought and USBM notables Ash Borer, Predatory Light is the metaphorical beast residing in their basement; darkly disquieting and utterly unnerving, with a melancholic streak that serves only to darken this trio’s already atramentous universe. Just as Irish troupe Malthusian ended 2013 on a gigantic high note with their bestial demo recording MMXIII, Predatory Light bring forth an equally primeval recording with MMXIV. Atmospheric in an entirely different manner to guitarist K’s day job, the sounds created here reside comfortably in boundless subterranean murk, swaying between eerie mood-setting and all-out extremity. “Changing Skins” sets the interminable tone of unearthly doom-ridden black metal, whilst “Spiritual Flesh” delves deeper into the root of the evil that emanates from the band’s collective consciousness. Unhallowed death growls echo amidst restless melody and ruthless unease; the stripped-back production accentuating the sense of foreboding that clings to Predatory Light like a malevolent spirit.

Originally released, as per the dernier cri, on a (very) limited run of cassettes (still available from Analog Worship, Caligari Records, and the band’s own Bigcartel page), MMXIV now rests in the hands of the lucky few, although bandcamp once again provides for those of us not so quick off the mark.

This is not a soundtrack for the end of the world, but rather the beginning of it. While land masses are formed from volcanic violence and leviathan earthquakes are as creative as they are destructive, Predatory Light unleash black metal doom upon the world from the safety of their obsidian vortex, drawing in all who dare to venture into the gloom and rewarding them with an eternally uneasy listening experience.