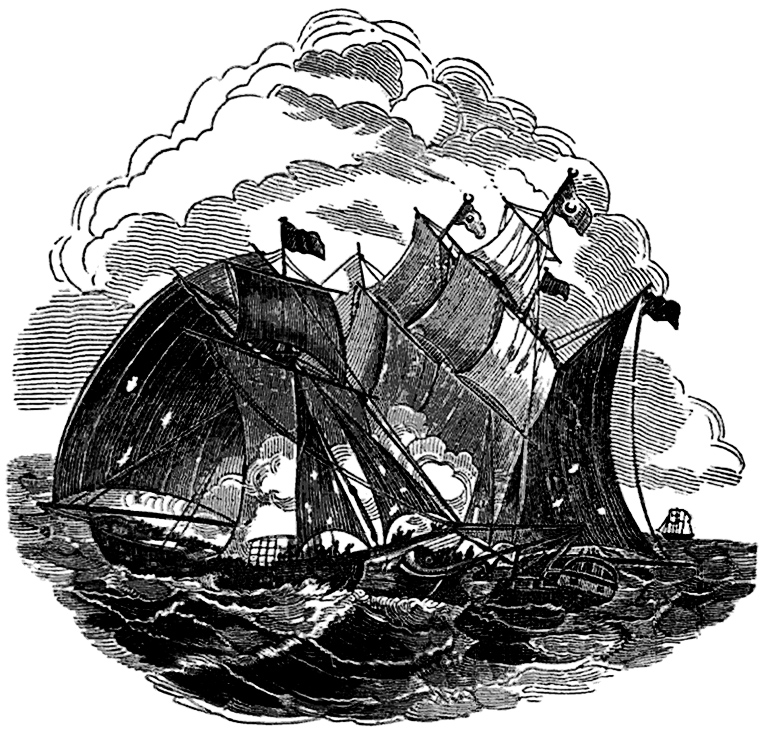 Pirates are one of those historical subcultures where you just know the truth is going to be a long way from their portrayal in popular culture. The ‘yarr me hearties’ and ‘shiver me timbers’ thing, the parrots on shoulders and buried treasure – nobody makes it to adulthood thinking that this is in any way an accurate portrayal of life during the Golden Age of Piracy, from the 1650s until the 1720s. The truth is that a good portion of the piracy happening in the world during this time didn’t happen in the Caribbean; the Indian ocean had better booty and the Mediterranean had easier access to ports. Many ‘pirates’ weren’t pirates at all – they were ‘privateers’, given Letters of Marque by governments that allowed them to attack vessels belonging to other countries with impunity.

Despite contemporary accounts of colorful, all-powerful pirate captains, most modern scholars agree that the majority of pirate vessels worked as democracies, with one experienced crewmember acting as a battle commander during a fight but the day-to-day running of the ship decided by a vote. Even the biased and mostly fictionalized accounts of the day had pirates splitting their spoils far more equitably than the Royal Navy, where captains would often ‘tax’ conscripts. The corruption and brutality of most regular navies caused mutinies and defections that swelled pirate numbers, with trained seamen eager to turn on the masters who had whipped and keel-hauled them. This was happening a hundred years before the French and American revolutions, at the birth of modern capitalism but before the birth of modern republics and parliaments – and the idea that anyone should vote on anything was shocking enough. Even the idea that landed gentlemen could vote was new and strange, but pirate democracies allowed mutinous sailors as much, say, as freed slaves, and, even more shocking, women. Wives often disguised themselves as men to follow their husbands to sea, so they too ended up in pirate crews. They had some other ideas that were ahead of their time: two pirates could enter into ‘consortship’ or ‘matelotage’ with each other, so if one died the other would inherit his possessions – maybe it was all totally platonic, but you have to wonder if maybe, in addition to modern democracy, pirates also invented gay marriage.

Supposedly, some went even further.

Pirates had always needed to come ashore to restock (or for awesome parties, like current spiced rum mascot Henry Morgan’s 1669 bash in Hispaniola, which climaxed in drunken revelers blowing up their own ship.) Mostly this could be done in isolated coves or the Free Ports that didn’t owe their allegiance to any one country. Over time, these places became settled and pirates took their radical experiments in democracy ashore. Unfortunately, records of these ‘pirate utopias’ are nearly nonexistent. They didn’t have much use for writing anything down and their enemies were ‘salt the earth and leave no stone atop another’ types, so don’t expect a guided tour around a pirate utopia any time soon. Even the most famous pirate utopia of all, Captain Mission’s micro-nation of Libertatia, may never have exited.

According to Captain Charles Johnson’s A General History of the Pyrates (that’s not a typo – it was written twenty-five years before the first dictionary), Captain Mission was an officer in the French navy. Taking shore leave in Rome, he took one look at the opulence of the Vatican and lost his faith. He fell in with fallen priest named Caraccioli who turned his inchoate rage into a political program. Today we’d call it anarchism and atheism, though at the time those were both terms of abuse.

Mission set to sea with a crew of two hundred pirates, finding himself off the coast of Madagascar, a popular destination for the piratically inclined, with its miles of unexplored coastline and close proximity to gold and slaves coming out of Africa and silks coming out of India. Mission wasn’t there for the booty though. He wanted to put his radically socialistic and democratic ideas into action through direct democracy on-board his own vessel and the deliberate targeting of slave ships, since he believed that “the Trading for those of our own Species, cou’d never be agreeable to the Eyes of divine Justice: That no Man had Power of Liberty of another.” With long speeches on Liberty and Equality and Brotherhood to captured ships, he managed to convert both sailors and slaves to his cause. He even managed to marry a local princess in the island of Johanna – a pretty common pirate tactic for making inroads with locals and advancing their personal brand as kings of their own outlaw domain. On the north coast of Madagascar, Mission found a bay with fertile farmland, friendly locals and fresh water. This was the perfect place to take his ideas to the next level. He founded Libertatia, printing and distributing a charter that abolished private property and ceded power to an elected assembly. Mission was elected to the position of ‘Lord Conservator’ for a three year term, while Caraccioli became secretary of state and Captain Thomas Tew admiral of the navy.

Tew was a long-time privateer turned pirate (a pretty common career path) who fell in with Mission after part of his crew deserted him to found their own Madagascan colony. Tew was a legend in piracy who had amassed a fortune equivalent to $112.8 million in today’s money (according to Forbe’s list of the Top-Earning Pirates, an actual article which exists). That’s about ten times what Edward ‘Blackbeard’ Teach made during his career. When exactly he took the time to found the settlement in his busy schedule is a matter of debate, leading some modern scholars to conclude that he had nothing to do with Libertatia, if it even existed.

According to Johnson’s narrative, Tew was far too anarchistic for even Libertatian democracy, and after a short time took his powerful warship, the ironically named Amity, and left. Years later, Tew was disemboweled by a cannon shot while attempting to take on a twenty-five ship convoy.

Libertatia flourished for twenty-five years before the friendly natives became a lot less friendly and attacked the colony. Mission and the other Liberi escaped, but a freak hurricane hit while they were at sea. Traces of their colony were either erased by the Madagascan natives or are lying somewhere in the vast expanse of the Indian Ocean.

There’s a good chance that A General History of the Pyrates was written by Daniel Defoe, the author of Robinson Crusoe and hundreds of other books and pamphlets under nearly two hundred pen names. Defoe wasn’t just a chronicler but a participant in the religious and political upheavals in early modern Britain (and could have been hung for his part in the failed ‘Monmouth Rebellion’), and though he didn’t share Mission’s radical ideas he would have definitely been aware of them. Many of the pirates he profiled in his book were veritably real, including Captain Tew, and there’s no evidence that anybody at the time thought that the story of Captain Mission was particularly outlandish. In short, even if it didn’t happen, it could have happened, which is testament to the fact that the pirates who were supposed to be drunkenly raping and pillaging were actually carrying out the early, fragile, brief experiments that became the modern world.

In this article:anarchism, history, libertatia, pirates