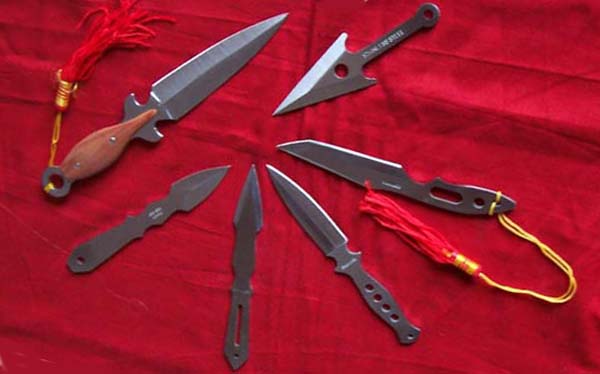 While today we use boring methods of execution so as to preserve the humanity of both the executioner and the executed, back in the day they really didn’t give a shit about the people they punished. In fact, humiliation and suffering were important aspects of torture and execution, and no one did this better than the ancient Chinese. They were highly creative and seriously sadistic in their methods, and liked to do things slow and steady, often prolonging death for days. Below are some of the methods used in ancient China to torture and execute prisoners:

Also known as “slow slicing” or “death by a thousand cuts,” Lingchi involved the removal by knife of flesh from the body in small pieces and small, non-deadly cuts to limbs and torso. After chunks of flesh had been removed from all of the limbs, they were amputated from the living torso. The executioner made sure not to bleed the victim too much in order to prolong death until the final cuts to the throat or heart were made. Lingchi was brutal and slow, and a punishment that carried on into the afterlife, where it was said that a person killed by lingchi would not be whole after death. According to Sir Henry Norman in his book The People and Politics of the Far East, the executioner sliced off pieces by “grasping handfuls from the fleshy parts of the body, such as the thighs and the breasts…then the limbs are cut off piecemeal at the wrists and the ankles, the elbows and knees, the shoulders and hip. Finally the victim is stabbed in the heart and his head cut off.” Lingchi was one of those brutal torture methods that were photographed in the 1800s with the advent of the camera, so there are a lot of scary photos of this one! Flaying, or the removal of skin from the face or body of a person, was practiced all over the ancient world, but the Chinese were very fond of it. Customarily, it was done with a sharp knife, carefully slicing into the dermis and removing the skin of the face in one piece. Many Chinese emperors and empresses loved flaying their detractors, The Hongwu Emperor in particular – he ordered the flaying of 5000 women in 1396. The skins were either stuffed with straw or nailed to a wall to show off to any potential enemies of the state. I also found a particularly gruesome story about flaying with mercury, whereby the victim would be buried upright to the neck, and have two cuts made in the scalp and mercury poured into them. The weight of the mercury would cause the skin to separate from the flesh, and when the victim writhed in pain they would slip from their skin like a banana from the peel. I couldn’t find anything to back this up, but it sounds awesomely fucking sadistic!!! Bamboo grows at an insane rate, sometimes feet per day, so the Chinese took advantage of this by using it to slowly kill prisoners in an excruciatingly painful way. The prisoner would be suspended above shoots of living bamboo that had been sharpened to a point. As the bamboo grew, it would slowly pierce the victim’s flesh and grow into their bodies to pierce their organs. Nobody had to get their hands dirty, the bamboo did all the work. I can’t imagine the terrifying feeling of the bamboo pressing into my flesh, knowing that it would inevitably enter my body.

According to the Chinese historical documents known as the Twenty-Four Histories, a woman who was convicted of conspiring to kill her husband with her lover was often punished with a device known as a wooden horse. This was basically just a sharpened wooden stake that she was hung above, with the tip in her vagina, and then she was cut down, allowing the stake to enter her body and pierce through it until it came out the top. Holy fucking hell that is disgusting!!! As well as creative torture and execution methods, some Chinese emperors were especially brutal when it came to whom suffered at their hands. The Nine Familial Exterminations is a good example – when a person was condemned for crimes like treason, the emperor may also choose to punish eight other levels of their family, which meant their children, parents, grandparents, siblings, siblings in-law, parents in-law, aunts and uncles, often by a method like lingchi. In one case, that of Fang Xiaoru, a scholar in the Ming Dynasty who refused to write the inaugural address for the incoming emperor, he asked that ten levels be executed, so the emperor also included his students, and executed a total of 873 people.