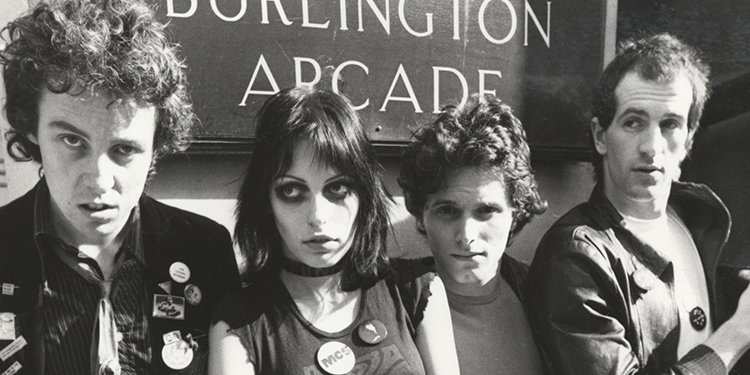 I was late on The Adverts. They somehow got lost in my initial exploration of the 70’s punk era. Bad move. They existed in such a small window of time. They did all the regular punk rock stuff. They did Top of the Pops and Old Grey Whistle Test. They had chart success early on. Their members felt overshadowed by one popular member. You know – the usual rundown of early punk rock hangups.

What they produced is far from usual, though. That’s the sad part. Their first album, Crossing The Red Sea with The Adverts, is nothing short of a bold scream above the clamoring of a saturated punk market. To me, they could have transcended the normal bullshit that plagued their contemporaries. They were interesting enough to surpass the nonsense. They were smart and dark. They hit chords that give me chills and flash me red hot simultaneously. Not a surprise they were able to tour with, and rival, The Damned and The Jam live – if only for short-lived time.

T.V. Smith, the band’s singer, is haunting. His lyrics captivate and seem more serious than the usual “I’m gonna be myself” type of attitude. In fact, the lyrics are introspective and deep, covering an array of common subjects but in a wholly fresh and clever way.  He had a way of singing that when I hear it, I can relate to his anger. Smith doesn’t hide his British accent. Instead, he uses it to convey a personable cockiness, making a perfect vehicle for his pointed skepticism. Their simple songs play out like short, gloomy melodramas. Little, ghoulish pop nuggets from a raw and uncomfortable cave packed with cheeky British teen angst. On the darker songs like “On The Roof” and “On Wheels,” they crystallized their own sound. The music is driving with a lot of traditional rock strumming and beats provided by Howard Pickup and Laurie Driver, but then they hit you with these clever proto-goth licks that strike so hard. They take you up levels at a time, getting more intense, and bring you down like the cable was snipped on your elevator. They foreshadow bands like The Gun Club that combined punk, goth and twangy, country- fried spazz surf. They come through in black and white with splashes of red. They captured an interesting dichotomy of a bleak world with innocence hanging on by a thread.

The bass playing gives those proto-goth parts so much depth, while driving the punk elements right up your fucking nose. The bassist Gaye Advert was considered to be the “first female punk star.” To me, she was one of the most solid and truly badass punk musicians of the era. She embodied the DIY ethic with a genuine air and let it be about the music.

They were self-proclaimed “one chord wonders.” Even going as far as naming the first song on their debut album that – but anyone that knows shit about 77’ Punk knows that they were more than that. Much more. Though they broke up because of in-fighting and a lack of funds, they seemed to me a contrast to Pistols. They didn’t have the publicity and the shenanigans, they were about the music. Actual artists.