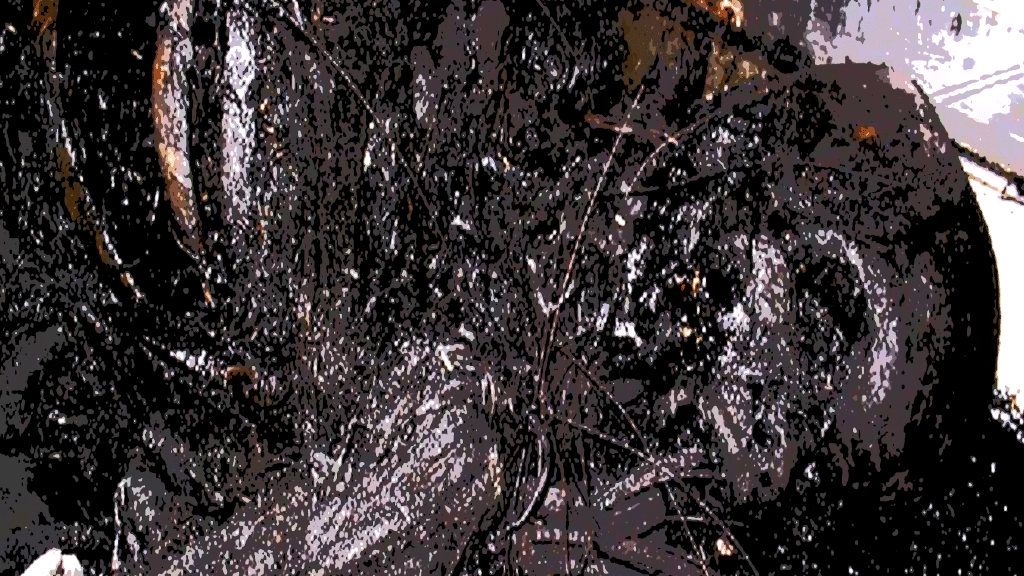 Welcome to the absolute reign of terror of American one-man black power electronics cataclysm URANIUM. Over the past year, the mysterious East Coast-based aural weapon has silently risen from its obscure radioactive abyss with a couple of self-released singles via Bandcamp which have given mere hints to the monstrosity this fascinating project harbors. But it is with the debut album Wormboiler that its full destructive potential is unleashed and that the project’s antihuman force comes to light in all its marvelous glory. “Wormboiler” officially releases tomorrow November 5th on cassette and digital formats via Sentient Ruin (get itat their webshop or Bandcamp) and today we’re ecstatic to unveil the full immensity of this BEAST via the album’s exclusive full stream below.

Sentient Ruin explains that “Wormboiler” is actually a full-length compilation of a previous band-released digital EP “The Glorious Void” and a brand new previously unreleased EP, “Wormboiler”, also the namesake of this album. As the band’s name undoubtedly suggests, Uranium is a project that revolves around the focal point of nuclear energy, and the various ramifications that such a concept can harbor, mainly the scariest ones. “Wormboiler”‘s monstrous aura is the undeniable testament of this, as its otherworldly framework of sound brings to mind end-time scenarios of unseen immensity, facing the listener with a nightmarish sonic trial of complete ruin and inevitability. The album unfolds an immense sonic tapestry of magmatic, scorching electronics and abyssal soundscapes that envelope the listener into some kind of immense post-nuclear film score, obliterating their ears and pulverizing their senses in an almost cinematic, grandiose kind of way.

Despite its full-frontal and deliberate experimental nature, “Wormboiler” has the DNA of the harshest industrial, and the incumbency and urgency of the darkest extreme black or death metal, to which it does indeed tie into under various aspects. It doesn’t beat around the bush or get lost in the meanders of ambient self-indulgence or experimentalism for experimental sake, but rather it builds massive expectations in a matter of minutes if not seconds and then executes the masterplan flawlessly, track after track, minute after minute with immense tidal forces of repeatedly building tension, releasing it with otherworldly force, and then re-building it with just as much tension and anticipation. There is no moment of dullness or of cryptic hermeticism in this work, and you will not hear forty-plus-minute experimental music BEASTS like this one go by so fast, so excitingly and so intensely. This is because the musical effort put behind this album is remarkable, and the skills going into the songwriting and soundscaping to keep everything focused and flawlessly executed are immense and reach far above and beyond ambient and noise.

It is with this masterful aura of immensity, tension, and of incumbent disaster that “Wormboiler” executes its concept so well. When it comes to nuclear energy, nothing conveys the fear, reverence, and feeling of inevitability that goes into evoking the primeval energy of the universe and its destructive powers as Uranium does. And that’s where “Wormboiler” accomplishes the unthinkable, weaving atmospheres and electronic compositions that swell with the infernal tension of total disaster and inescapability, evoking the darkest power of the universe, from the incessant devourment of molten radioactive magma to the silent horror of drifting fallout, to the divine force of sweeping shockwaves, rising mushroom clouds, and descending fireballs. It’s not only the power of destruction that seethes from this music but also the long shadow of all the misery that it drags in its wake, be it environmental damage, deformities, illnesses, ruin, and the long tail horrors and nightmares of all kinds that emerge decades and centuries after the main nuclear event.

We could cite the cream of the crop of the darkest strains of Industrial to describe “Wormboiler” – be it Godflesh, MZ.412, Brighter Death Now, Controlled Bleeding, etc, but none of it would really do justice to a work that is and exists perfectly within its own confines and which needs nothing outside of it to help it being understood or appreciated. The truth is that “Wormboiler” is such an accomplishment and again, just such a fucking BEAST of an album regardless of genre and their overall accessibility, that all you need is to spend time alone between you and itself for it to overwhelm and marvel you in ways you never thought possible for a release like this.

In this article:Featured, Sentient Ruin, uranium