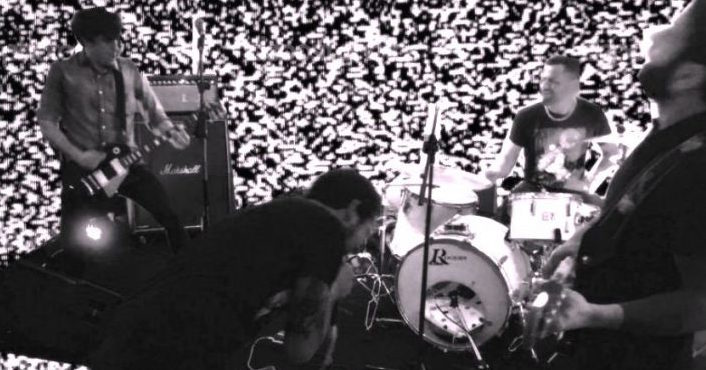 One of the keys of my conversation with Johnny P. from SECT MARK lies in his slight Roman inflection, which unfortunately I cannot render by typing on my computer – and even less by typing in English. Yet the very essential thing you need to better enjoy this chat is just a click away from you: in fact, here you can listen to his band’s new MLP, Worship, and let it whip your brain for the next few minutes.

This is just the second proper release from Sect Mark, but the personality of the band already sounds strong and well-defined. After all, its members come from a number of interesting projects, such as Metro Crowd, Education and Lexicon Devils. The first surfacing of SM on the market dates back to 2016, with a grinding 10 minutes EP eloquently titled Demo. This work, that you can check out here, gives you exactly what the title and the artwork promise: straight-to-the-point raw songs, with a sound that feels more or less like sand paper on your eardrums. As for Johnny, the man behind the raging screams blowing up your headphones is actually a very laid-back, friendly guy who barely seems able to feel the genuine hysteria that overflows from his music. “You know,” – he tells me – “we’re all sort of the kindest souls, in Sect Mark.”

I’m sure, but I also think that it’s a good moment to feel pissed off of everything, don’t you?

Yes. At least for how things are going in Italy. But really, we’re not the angry guys at all. We just like to play around, make music, and most of all we love the atmosphere of the hardcore scene.

…which is always a very warm one.

Yes. It’s a very emotional scene, where friendship means a lot. It’s more than a simple fan base. At the end of the day, you have a lot of friends coming to your gigs, promoting your band, having fun and sharing ideas with you. This is also the spirit driving my own label.

(In fact, besides being the front man of Sect Mark and having been involved in various other bands, Johnny is the chief of Hidden Hands Records, a small label that will delight any digger of hardcore undiscovered pearls.)

A lot of the stuff I release is actually music made by friends of mine. People and artists I believe in and whose work I sincerely appreciate. I’m happy to help those who, in my opinion, have something to say. This is what really matters in my line of business.

What do you think about the state of health of the Italian hardcore scene, as a musician and a label owner?

There’s a lot of cool stuff, a lot of nice new bands coming up. Italy has always had a great musical scene overall, and hardcore is no exception, even from an historical perspective. People always had a lot of things to say, the contents are always relevant and strong. In Rome, my city, there’s also a lot of bands who have a more metal/metalcore nuance: not really my cup of tea, but some of them do very good stuff. There’s a lot of people working really hard.

Concerning labels, it’s impossible not to ask you something about the partnership between Sect Mark and Iron Lung.

At first, we just sent them some material in hopes to get a feedback from people we esteem. Jensen from Iron Lung is a great guy and he immediately replied to us, saying he appreciated our stuff. Therefore, when Worship was made, his label was the first in our list. I said, ‘Well, you can never know, maybe he remembers us’. And yes, Jensen remembered us and liked the album a lot. When they told us that they wanted us to sign for them, it was so exciting. Almost moving, I’d say! You know, we’re such a young and small band and having a label like Iron Lung believing in us is great: I mean, when we look at their catalogue and think we’re part of that family we feel really, really proud. That’s cool. But let’s spend a few words on Sect Mark’s past, present and future. Demo was blessed by critics. Asking if you expected this positive feedback is the archetypical non-question question, so I would like to just ask you how you’re enjoying the moment.

Well, I wouldn’t be able to quantify our success. I just can say that we had the chance to play a lot of gigs and meet a lot of cool people. The first pressing of Demo was made in cooperation with some friends from Trento – 70 cassettes only, that quickly sold out. Then we printed some more copies and they’re now sold out as well. So we’re really happy with the opportunities we have and we’re just trying to have as much fun as possible.

How about your plans now?

We’re playing some gigs in the upcoming weeks. Then we have some concerts in Eastern Europe. The response is very positive, it’s pretty rad to know that people all around the world are listening to our music in their bedrooms. We even knew about a shop in Thailand selling our record!

It’s a bit difficult to frame Sect Mark. How about your influences?

It’s difficult indeed. It’s very hard to answer this question! We have all different tastes and backgrounds. I used to sing in screamo bands, for instance, but I really listen to a lot of diverse music. When we started playing together, music came almost in an impromptu manner. Something we have in common, as influence, is surely the hardcore panorama from 1980 to 1984, especially ’82-’84. But the peculiarity of our sound is something we work on constantly. We want our music to reflect who we are. If you like the artworks of Sect Mark’s records, you should check out their creator’s Tumblr page: here is  more of Francesco Goats’ art.