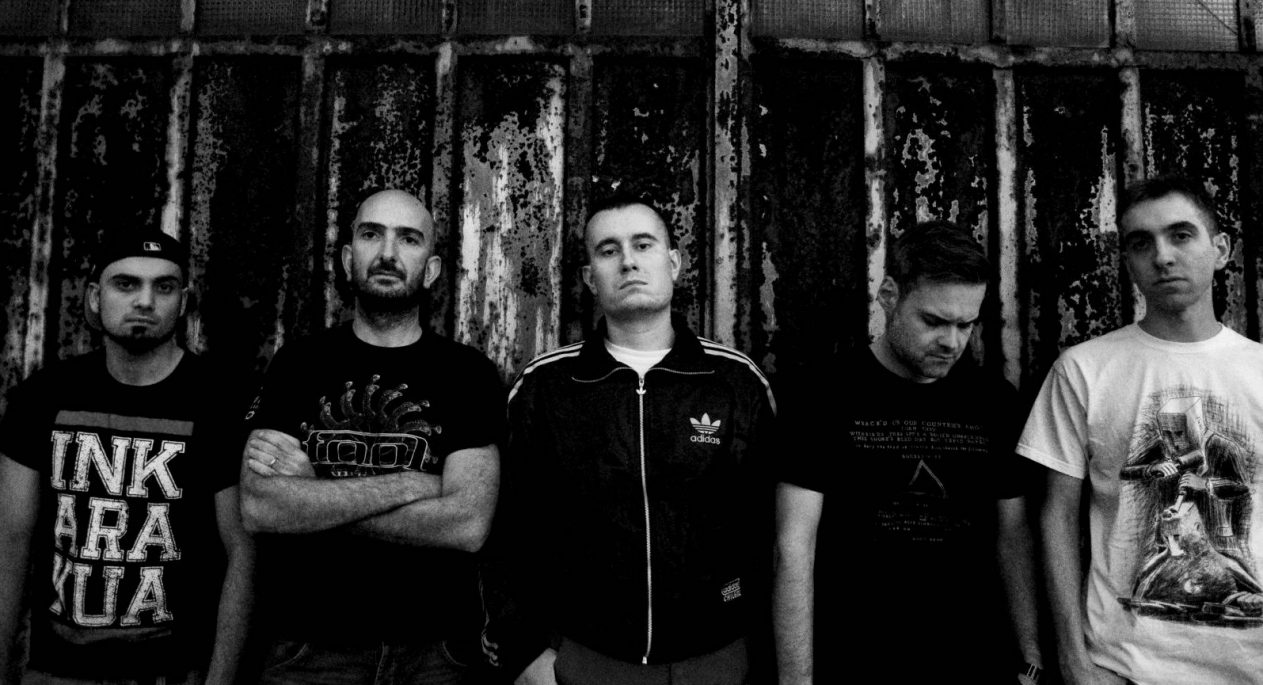 Four years after their last album, Nero in Metastasi, the Italian Grind/Hardcore beasts Cripple Bastards are ready to unleash their new full-length. This will be the Cripple Bastards’ seventh album and their first with new drummer Raphael Saini, who joined the historic members Giulio The Bastard (vocals), Schintu the Wretched (bass) and Der Kommissar (guitar). This new album marks the band’s thirtieth anniversary. I met the band during Venice Harcore Fest (Italy) and I asked them some anticipations before the upcoming release. This is the transcription of that chat we had.

You’re working on a new record that with be out via Relapse Records during this year. Can you please tell us more about it?

Giulio The Bastard: We just finished the recording. We recorded the instruments in Italy. Then, we mixed it in Sweden at Studio Fredman, just like the previous two albums. It’s even faster than before and it’s the first album with the new drummer, Raphael. And I’m very happy with the final result.

After Nero in Metastasi you chose to work with Fredrik Nordström again. Why did you choose this and how does he understand the sound of Cripple Bastards better than someone else?

Giulio The Bastard: We like the previous results and he’s very powerful at mixing all the instruments. The overall sound that we get with him is good. And it’s like a good crossover of the Swedish kind of production and our way of playing, which is a more Italian style with some hardcore features. So it’s a good crossover. That’s at least how I feel about it.

Schintu the Wretched: Also we worked with him for the previous albums, so we go there with very clear ideas about how to do the job.

Giulio The Bastard: There’s feeling with him and he understands what we need and I know how he reacts.

How did you meet him?

Giulio The Bastard: The first time was just for a test. We went there for the first time in 2006 after a friend suggested us to go there. Originally we had to do a recording in Sweden with Mieszko Talarczyk from Nasum but he passed away. So when that happened we tried to find a studio in Sweden and the second choice was Fredrik.

Zazzo from the Italian band Negazione is a guest vocalist in a song on the new Cripple Bastards album. How significant is the influence of this band on the roots of your music?

Giulio The Bastard: At least for me, it’s everything. He inspired my way of screaming, the album Lo Spirito Continua is like my reference of Italian hardcore and I’ve been listening to that since I was a kid, going to the shows since I was a kid. So it’s like an imprint for me.

Schintu the Wretched: We’ve been very influenced by all the old wave of metal and hardcore bands and Negazione is one of the best bands and we’ve been influenced by the sound and by everything.

Giulio The Bastard: And by the idea of sonic extremism because their early singles were very extreme for the time when they came out.

Der Kommissar: Between the old Italian bands, I think that Negazione is the most similar to Cripple Bastards in the upper parts.

Giulio The Bastard: A funny anecdote when I think about Negazione is when I first met the guitarist and started to discuss with him about their early recordings that were very raw and savage in terms of rage. He told me that the instinctive way of screaming and playing they had back then was somehow comparable to the CB style… but then they fixed things into something more controlled and “musical”. I was honored that we somehow reminded him their early, out of control and “mistaken” times, because that’s exactly how I wanted CB to be!

We could say that you guys have been playing for almost 30 years.

Giulio The Bastard: It’s now our 30thanniversary. Andrea and Roberto have been in the band for 20 years and 18 years. And Raphael joined like 4 years ago.

What pushes you to keep going?

And have you ever thought about quitting?

Giulio The Bastard: There were moments where I would think, “I better wait and see what’s going on or coming next.” But in those moments I saw that it was worth continuing. So, right now I’m really happy we’re going on.

Schintu the Wretched: And that’s normal in underground, it goes in waves.

Giulio The Bastard: Especially when you’re together for 30 years. There are some moments when things fall apart.

Schintu the Wretched: You’ve seen everything. It’s like a family.

Raphael Saini: The major point is that you have the same mentality. The same way of seeing music.

Der Kommissar: .. And stay together for 20 years!

Giulio The Bastard: Especially in Italy, you know. It’s not very Italian to stay together for so long.

Der Kommissar: You see, we all come from different cities from very far away. He’s (Raphael) from the island of Sardinia. And it’s very difficult to build up a long-lasting relationship, but we managed it.

Schintu the Wretched: I think that we think that music is special. We love it and we don’t give a fuck about the metal scene or the hardcore scene.

Giulio The Bastard: Yeah, it’s a matter of expression, a form of expression. It’s like when you write a book and you see the final result. And then you say we can improve, we can do something else we can move in another direction. So every time we see a final result that we’re happy with we like to keep going that way. The first Cripple Bastards full length is from 1996. But you had been playing for a long time before that. What’s the difference between playing these days compared to at the beginning of your career?

Giulio The Bastard: Everything has changed so much over the years. Especially in the very first years, the expectations were different. We were playing at the very beginning just to record some stuff on tape just to have some shit at home to listen to because there was not much grindcore around. So it was like for our own personal taste, to have something recorded and have more noisecore to listen to at home.

Giulio The Bastard: Nah, I was even younger when I started, like 13 or 14. And then we recorded the first album only in 1996, about eight years later, because we were so young that we had no money to afford the studio recording before then. So that’s why at the beginning we were doing short-end releases, like EPs and tapes and stuff like that.

What was the Italian music scene like at that time?

Giulio The Bastard: Back then, when we started, it was the end of the Italian 80’s hardcore. So these bands were starting to play metal-influenced hardcore. Bands like Impact or Raw Power mixing a lot of metals. There was the grunge influence coming in as well, especially like in 90 or 91. So the style was changing a lot and when we saw these changes there was something that motivated us to play even faster, to stay away from this kind of change. What band are you listening to lately? Are there any new bands that you like?

Raphael Saini: I’m 35, and when I listen to records these days I feel really old, because there is nothing that I really enjoy. Not because of the music itself, but because I don’t really like modern production. I think it’s too plastic and perfect and it’s basically missing the reason why I was listening to this kind of stuff 20 years ago. So actually that’s one of the reasons in the last album that we did that we tried to really keep it as real as possible. So we avoided using triggers or click-track in some parts because we were trying to make a record that basically we would like to hear. We don’t care about it being perfect, we care about actually having something that you feel. Even if it’s a bad feeling to listen to some music that’s how I like it.

Giulio The Bastard: I listen to a lot of Japanese hardcore. Even new bands are good for me, I always keep updated about them. The legendary bands that are still going on, like from 30 years ago that are still releasing new albums, and there are new younger bands that are really worth checking out. But this is all mostly hardcore. Although recently I also found some very good grindcore bands. And I never listen to grindcore records. But I found this band called Excreteass with ex members of Gore Beyond Necropsy, 324 and the guitarist of the local HC masters Canaria and they’re so fucking good Your dedication and contribution to extreme music is outstanding. Can you please give some advice to any young musician or any band that wants to play grindcore or hardcore or whatever?

Schintu the Wretched: Be yourself! Do your own thing.

Giulio The Bastard: Try to put all your rage and frustration and feelings in it. Probably with grindcore it’s negative feelings, that’s what I always felt. So if you’re a person with a lot of negativity inside, try to put it into that and push it out of yourself so that you can feel better. And do something creative. That’s my advice especially for this kind of extreme music.

Schintu the Wretched: It seems like people are afraid to express themselves.

Giulio The Bastard: Never pose. Do it from the heart, and if you’re screaming, scream out of your lungs.

Raphael Saini: Don’t try to please anybody. That’s a problem, trying to please others.

Schintu the Wretched: You won’t make any money playing grindcore anyway, so don’t work to please anybody.

Giulio The Bastard: And the advice is like try to die on stage.

Schintu the Wretched: Don’t be too concentrated on people and what they think. That’s stupid.

Raphael Saini: It’s not about pleasing anybody; it’s about making people uncomfortable with this kind of stuff. So when people listen to our music I’m happy if they say “this is shit.” That’s our goal. Not to hear, “Hey, nice record.” We didn’t care about others’ opinions.

Giulio The Bastard: It has to be ugly in some way. Loud and ugly.