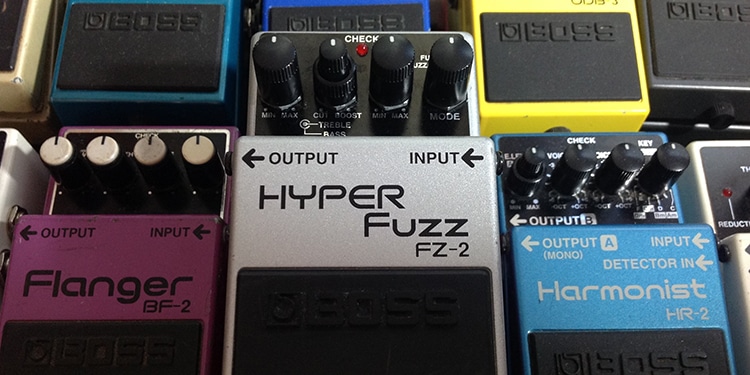 When we started Monolord, I tried the fuzz pedals I had at home to find something that sounded as evil as the sounds I had in my head. None of them was what I had in mind. The first version of the song “Empress Rising” is recorded with a Big Muff, I think. It sounded alright, but not what I wanted. I bought a Boss Hyper Fuzz FZ-2 on ebay because I read a lot about it. I knew that Electric Wizard used one of those when they recorded Dopethrone and I thought I could tweak it to a sound that I wanted, because the guitar sound on that record is nasty. I got it a few weeks later, plugged it in and an immediate smile appeared in my face. The intention was not to sound like Electric Wizard, it was to get something that sounded almost bad, but tweak it to something Iliked. Running it through my Orange amps and cabs is pure gold to me.

The one hour live stream I just did on @easyriderrecord’s Facebook page compressed down to 1 minute. #monolord #ridingeasyrecords

It can be a bit hard to handle if you don’t know how it works, though. Sometimes when we fly in to gigs and use the rented backline (which often is Marshall), I have to turn the treble down to 0 because it has some nasty high end. The Orange amps are a bit warmer and work better with the pedal. But I have worked a lot with my sound to make it sound good.