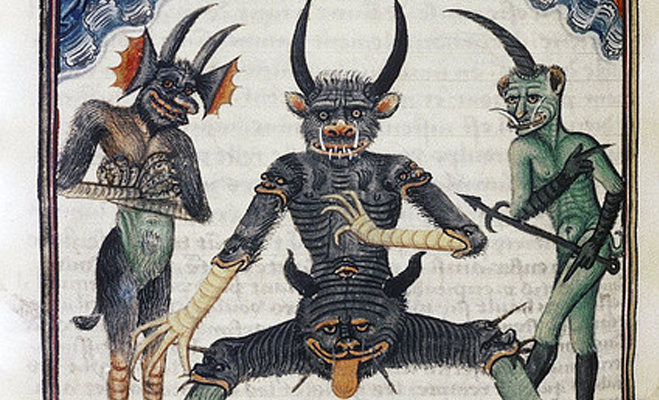 I know people for whom the battle with demons for their soul is very real – and I’m willing to bet that if you live in the US, you probably know a few people like that too. They are constantly calling out for Jesus/Allah/Spaghetti Monster to protect them from the evil spirits and demons trying desperately to infect their minds and bodies. It’s pretty funny, but I only think so because I just let the demons in, so they and I have a good laugh together watching these devout fanatics’ futile struggle. It makes me think about a time when this was a reality for a good portion of the world, when my ancestors would look upon woodcut images or paintings (ok, maybe not my ancestors, because they were probably poor as fuck peasants, but you know, the rich people who told the poor people what to believe) of the Devil and his Demons and tremble with very real fear of these creatures. Here is a collection of medieval demons, as well as a quote that explains the medieval mindset when it came to good and evil…

The war between Good and Evil was the profoundest reality of life, since upon the issue hung the eternal destiny of the soul. The salvation of the hard-pressed soul was the supreme prize of existence, and mortal life became subject to a single evaluation – the soul’s progress toward God or its defection away from Him.

The adventure of life was, in our sense, inward and spiritual. God created the earth and the heavens and all things therein so that man might work out his life and destiny. Man was at the center of the universe and everything possessed significance not in itself but for man’s pilgrimage.

The Devil and his demons indeed were very real and very close, and the powers of God and his angels needed constantly to be drawn upon to combat them.

What we call external reality was subordinate to the central conflict. The observer was himself in the picture at the center, and the world was more like a garment man wore about him than a stage on which he moved. The internal and external world were identified in a state of fusion and wholeness.

– The Idea of a Person in Medieval Morality Plays, Natalie Crohn Schmitt