Part II- Trail of the Great Old Ones

While the stick hexes of the Blair Witch franchise have a clear lineage, the so-called “devil nets” or “bird traps” of True Detective have a much more mysterious origin. They are described by a pastor in an early episode as being connected to Santeria. As the show progresses, we are introduced to the Carcosa/Yellow King mythology and become immersed in a world where Weird Fiction becomes intertwined with their investigation.

Series creator Nic Pizzolatto dove deep into the genre to develop this mythology, pulling from Ambrose Bierce’s An Inhabitant of Carcosa and Robert W. Chambers’ elaborations on Bierce in The King in Yellow. These two early entries into what would become the Cthulhu Mythos drive much of the occult-influenced design in the show.

Under the direction of Production Designer Alex DiGerlando, Detroit-based artist Joshua Walsh was commissioned to make sculptures and paintings for props and sets of True Detective. A long time resident of New Orleans, Walsh had knowledge of where to collect suitable natural materials. Walsh also had a history with the local practitioners of the Haitian strain of Vodou, having been commissioned to make altarpieces for Sallie Ann Glassman.

While Walsh and Di Gerlando were responsible for fleshing-out the final design of stick tripods with spiraling crosspieces, the objects were described in some detail in Pizzolatto’s original script. Like many of the other occult elements of the show, they have their origins within Weird Fiction and the Cthulhu Mythos.

In the early 1960’s, Lee Brown Coye was given the opportunity to write a column for the Mid-York Weekly. This was a departure for Coye, who had worked most of his life as a commercial artist and illustrator. He jumped headfirst into the opportunity penning his “Chips and Shavings” pieces for the paper for around two years. The column was a mix of local history and folklore, some told through first-person narratives, along with occasional illustrations by the author. One such story, dated to 1938 by Coye, was a personal encounter with “a collection of strange lattice works of branches, sticks and boards nailed and wired together in fantastic array” on a fishing trip to Mann’s Brook outside of DeRuyter, New York. The structures led him through a rural property, eventually bringing him to an old farmhouse. While exploring the building, something or someone tried to accost him. Coye struck his assailant with a camping frypan and fled the scene.

Coye’s illustrations for his “Chips and Shavings” column.

Coye shared this story with a number of people over the years, including August Derleth, one of the proprietors of the publisher Arkham House. Arkham House was founded by Derleth and Donald Wandrei originally to preserve the writings of H. P. Lovecraft, and their publications helped establish the canon of Weird Fiction works that would make up the Cthulhu Mythos. Coye had done illustration work for the imprint in its early years and seemed to harbor hopes that his tale would one day be taken up by an Arkham House author. It would finally be fleshed out nearly a decade later by Karl Edward Wagner, a writer and one of the founders of the publishing house Carcosa.

Coye worked as an illustrator off and on from the 1930’s until his death in 1981.  A motif of latticework structures appears in many of his works. They were often one of the few elements designating structure within undefined or vast space of the image. The latticework hints at architecture, but is too fragmentary to really enclose space within the images.

In his correspondence with Wagner and others, Coye told his Mann’s Brook story as the origin of the lattice motif. He claimed that he tried to return to the site around the time of the publication of the “Chips and Shavings” columns, but it appeared the site had been cleared due extensive flooding in the area. Coye later took Wagner and his Carcosa publishing partners to the site on a visit to New York. This visit seemed to solidify things for Wagner, who penned the short story “Sticks”, first published in a 1974 issue of the magazine Whispers.

“Sticks” is as much a story about an artist tortured by his experiences, as it is a narrative based off of Coye’s account. Wagner paints a picture of a fictitious sculptor based off Coye, whose experience drives him to mimic the stick hexes encountered many years before. A fan of the short story is none other than True Detective creator and writer Nic Pizzolatto, who discovered the piece while doing research for the show.

Coye probably would have revelled in the deepening of the mythology around stick hexes by Pizzolatto. He was master at one of America’s favorite games: the act of self-mythologizing. You see, Coye’s lattice motif first appears in an illustration from 1932, six years before he would have his “fateful” encounter at Mann’s Brook. Illustration from Coye’s 1932 book “The Seventh Ogre”. Notice the lattice work strucure in the background. 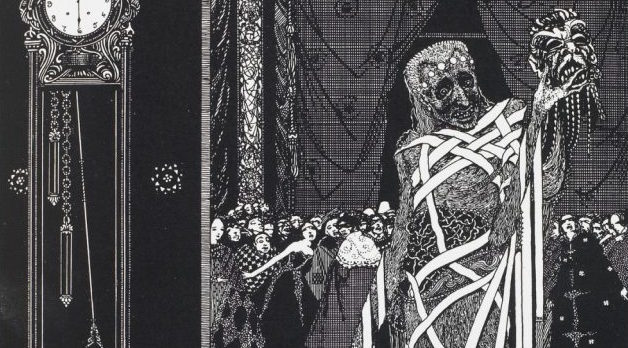 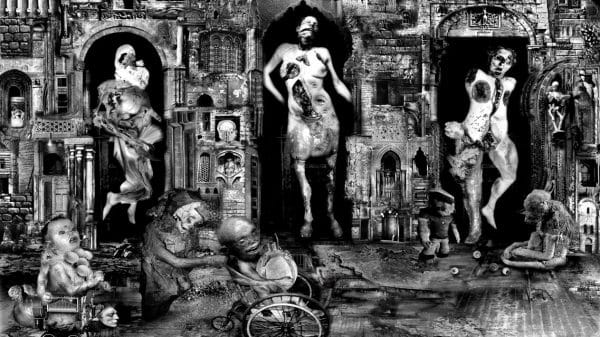