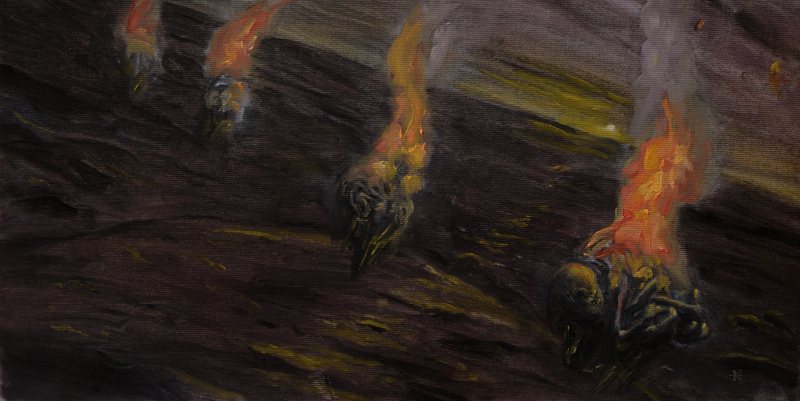 Remember when we talked about the debut Demo of Irish blackened death metal bestiality MALTHUSIAN, and of how fucked up and awesome the band sounded on that first release of theirs? Well, rejoice – the Irish dudes are back, back at desecrating your ear drums with another punishing blast of vile and lurid angular blackened death that will scavenge your soul, leave you agonizing in fear, and raise the hype around this band even more. Below the Hengiform is the band’s second release, a three song EP that sees the band further elaborate upon and enhance the putrid black metal/death metal hybrid they showcased on their debut demo, and which is a work that twists and disfigures their sound even further. This time MALTHUSIAN’s sound appears to be more fucked and moribund than ever before.

Taking cues from doomy death metal legends like Immolation and Incantation, the band has refined its sound, enhancing its doom tendencies and have set the rhythms of this EP on a disgusting and crawling mid-tempo that is broken apart at regular intervals, slashed open and gutted by furious and rabid blasting accelerations, only to then collapse back into a slimy funeral march. Aside from the weird tempo the music is set to, what makes this EP so fucking weird and wretched is the guitar work, which is mostly made up of a frightening storm of buzzing, swarming and angular picking abstractions that bring to mind the work of bands like Portal, Mitochondrion, Auroch and Antediluvian, and of the most wretched and hallucinating of death metal guitar playing imaginable.

The end result, needless to say, is one of those avant-death metal releases that appear extremely hard to pin on a map or define with common terminology. The tempos change on a dime and shift in a fraction of a second, the atmospheres are suffocating and surreal and provoke a weird sense or claustrophobia and oppression, and the overall performance – including the absolutely hideous and revolting vocal delivery – is just aimed at causing complete confusion and immeasurable angst in the listener, as the band rips through these three tracks like a horde of demons who have escaped the pits of hell and gone on a desecrating rampage to kill and torture anything they can get their hands on. Below the Hengiform is once again available from Invictus Productions, and sitting on this release would be nothing short than just fucking stupid.