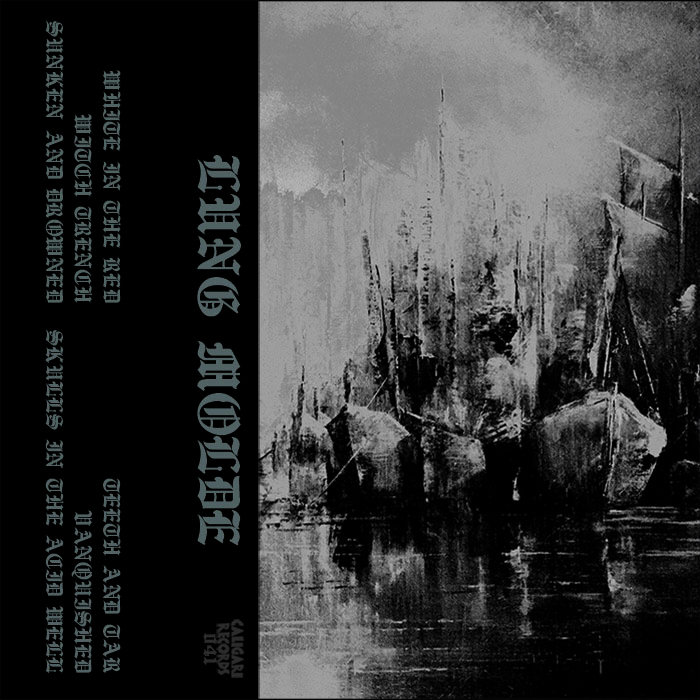 Lung Molde’s sound is muggy, oppressive, and a bit too drug-addled to shake its hallucinogenic tracers. Between the bellowing chants, mammoth riffs, plodding drums and gnarled bass, expect no reprieve here. To throw this album on is to wade in Lung Molde’s muck. Leadoff track,“White in the Red” is the primer here, commencing with a caveman build that crashes down into the track’s lockstep pulverizing. For the track’s finale, the band bring the devastation to a stop and proceed to clear the remainder of the room with a spectral dirge one could only describe as miserable. Lung Molde employ this iteration throughout the album; evolving a song from headbanging badassery to head-bowed agony. It’s a cruel yet effective trick which helps to distinguish the band from single-minded doom/sludge acts out there who are content to bludgeon with bong in hand.

With that said, Lung Molde are not without their touchstones. Whether they be influences or not, I hear a few different shades of modern doom here: Sleep in the megaton riffs and mantra-sung vocals; YOB in the dissonance of the lead guitar; Indian’s depraved melancholy; Pallbearer’s proggy riffing; and Electric Wizard in the druggery of it all. “Teeth and Tar” is another highlight which barrels out the gate with what sounds like a long-lost High on Fire riff, but is abruptly pick-scraped away and heaved into a burly chug and beastly vocal coda. The unexpected shift in time signature makes Lung Molde’s visceral brand of doom all the more unhinged. It’s another trick in Lung Molde’s demented arsenal.

“Vanquished” is a similarly odd track, one which utilizes unorthodox timing to a strong effect, resulting in a barbaric, slow-mo death metal-like lurch. Final cut, “Skulls in the Acid Well,” dazzles with a spectacular meltdown of psych-metal solos atop one of the most lumbering riffs on the album.

Blunt in force and harsh in tone, the band has plenty of riffs, an engulfing atmosphere, stampeding rhythm and a frighteningly bestial vocalist. Lung Molde sound as if they are oozing. And while they may occupy a familiar musical space, they’ve got enough interesting ideas and a startlingly abrasive quality to their doomy stew to warrant repeated listening. Let’s keep close tabs on these guys, shall we?