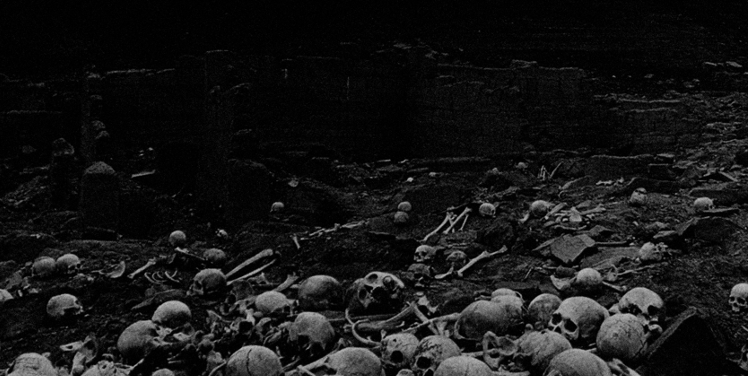 On November 23 Sentient Ruin will release Sermons, the haunting debut album from Italian dark ambient/death industrial demon CLAVICVLA, and today we’re stoked to bring you the first exclusive full listen of this otherworldly piece of soul-disintegrating aural terror. Clavicvla (key in latin) is the brainchild of sole mastermind Ittiel, a recluse entity inhabiting the Italian Alps close to the border with Austria. Nothing is known about Ittiel, this is seemingly his first complete work, but when you hear it, none of this earthly bullshit will matter anymore, as the music will just speak to you from a higher level, in a mysterious and alien tongue your brain won’t understand but which your flesh and soul will be ravaged by….

Ittiel has created an album that sounds like a portal or gateway to another dimension, where things are not sound at all. Imagine being teleported to the edge of the universe, the furthest you can image being in existence from home, so far, you won’t see home again in a trillion lifetimes. You’re lost in a remote and unknown corner of space where nothing is familiar. Ittiel drops you there in front of the biggest super massive black hole in existence and you can gaze at its enormity, the singularity, and the event horizon meticulously consuming everything. Beyond this cosmic cataclysm hallucination of indescribable enormity you can get a glimpse of the realm beyond as the black hole consumes the edge of space. Beyond lies a world unfathomed, where pure evil dwells.

It’s easy to tell Ittiel’s megaton dark ambient has a fascination and obsession with evil, as the album is littered with references to Satan and of the most occult and highest orders of evil. Just listen to a song like “Ma” and tell us if doesn’t feel like being cast away in the most remove corner of space with all the evil in the universe whispering unnameable things in your ears while the event horizon pulls you apart and consumes you. This is shit that sensorially and mood-wise is just on ANOTHER LEVEL entirely and which conveys monstrous amounts of dread, evil, and of just all around unsettling feelings and awe-inducing visions. “Psychedelic”, doesn’t even BEGIN to describe the sensorial enormity of the world fathomed by Ittiel. Sentient Ruin suggests everyone listen to this thing loud and in total darkness, that could be a bad idea but the concept is fitting. For anyone looking for clues, this shit sounds like Lustmord, Nordvargr, and Trepaneringsiritualen coerced together into asburd nightmare setting of remote, empty and cosmic satanism that defies any logic and where only horror and chaos rule everything with an iron first. Sermons just may be the greatest dark ambient album of the year. Order tapes, vinyl, and or digital of Sermons from Sentient Ruin here or here.