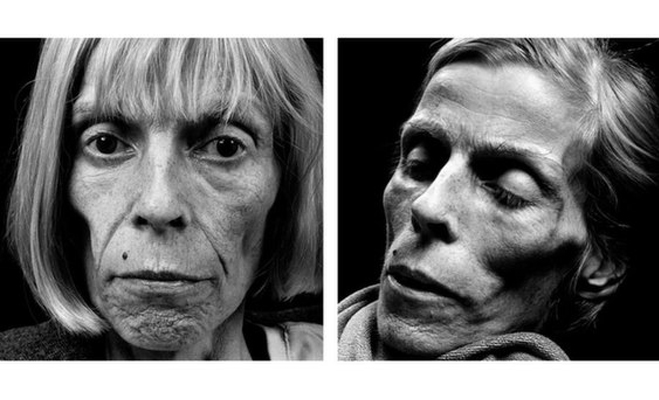 At the end of life: a camera lens, desperately recording and archiving the fears of the dying. For the series Life Before Death, the photographer Walter Schels captures the terminally ill in anticipation of the unknown and again in the moment after death. These intimate portraits are the last of a lifetime, documenting the body after some ineffable human essence has vanished. Informed by the words gathered in interview with the subjects by Schels’s partner Beate Lakotta, the haunting shots imagine the invisible, giving form to the most unconquerable human fear.

Schels’s portraits, in their silvery black and white tones, are reminiscent of Victorian post-mortem photography, presenting the dead as if sleeping, their eyes closed and brows gone slack in seeming comfort. These images are poignantly juxtaposed with the interviews, conversations in which even the most mundane, peripheral things of daily life are assigned significance; beside wizened and terrified eyes and coupled with existential wonderings are thoughts on fridge-freezers and local football teams. The banal works against and in service of the tragic; when confronted with death, a burial site and a cup of coffee are equally potent reminders of our mortality.
At the turn of the 20th century, it was believed that the eye recorded the last sight seen by the dead, that with careful study of the ocular nerves, we might reconstruct the moment of death. Schels’s subjects, pictured with gleaming eyes and contained within unrelentingly tight frames, seem to stare into the viewer as they confront inevitable passing, as if to implicate us or to say, “You are the last thing I saw.”