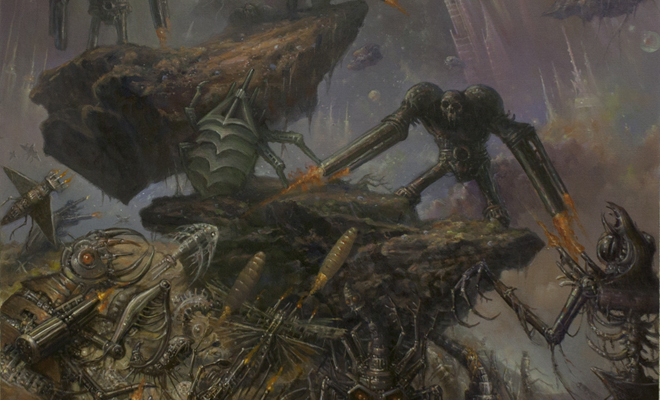 If asked what the most important thing is with regard to evaluating a piece of music, I’d undoubtedly say that it’s paramount that you approach everything with an open mind and with patience. Actually giving something a real chance, free from whatever biases you hold, is often the difference between getting “it” and not. It’s the difference between thinking Dissection’s Reinkaos album is a mainstream, inferior piece of garbage because you’re viewing it through the lens of expectation, thinking it should sound like old Dissection, versus judging it by its own merits as a completely different, unique entity unto itself. Simply how you approach an album sometimes means everything.

In this case, my bias attempted to manifest itself when I saw the description “Technical Death Metal” lapped onto Artificial Brain, a group I had never even heard of. I immediately cringed, imagining the abundance of groups fitting this description that bore me to tears with directionless songs that lack riffs and are merely technical for the sake of being technical. Needless to say, I had no expectations for Labyrinth Constellation. I did, however, give it a chance.

And I’m glad I did, because this is about as good as a debut album gets. Each track seamlessly flows and hits an ideal median in terms of technicality; just enough so that it keeps you engaged and makes you appreciate the structure, but falling well short of the all-too-often traversed point of entangled, dead-end wankery. Indeed, the level of cohesion on display is pretty astounding. In general, and with specific reference to the fact that this is a debut, you don’t see many playing this style and doing it so well.

Quality riffs abound here and pull largely from the likes of Gorguts and Wormed, but with refreshing dabs of atonal melodicism that bring to mind the guitar playing of Mick Barr (Krallice) and even Deathspell Omega on their most recent full length Paracletus. These touches are most notably relevant on “Brain Transplant,” “Worm Harvester,” and the title track. The bass playing is fretless and dexterous; pulsating in, around and beneath the impressively constructed riff set. The drumming is on par as well, driving the listener onward through Artificial Brain’s world of futuristic dystopian madness with an energetic, well timed performance.

Vocally, I’ve been reading a lot of people comparing Will to Antti from Demilich, but I’m sorry, no one really sounds like Antti. Not discounting that he played in Biolich, a Demilich worship band, the performance is much closer to that of Phlegeton from Wormed, in my humble opinion. In either case, his vocals don’t always stick to those tendencies, sometimes soaring into the nether regions of space with caustic highs on “Frozen Planets,” or with more throaty, directed shouts on “Wired Opposites”.

The sum of all these parts is a well-constructed monster of properly done Technical Death Metal with all the right influences. It has all the necessary ingredients of an incredibly impressive debut and I think most of you will see that. All you, the listener, need do, is give it the honest, open minded chance it deserves. Artificial Brain is onto something here.