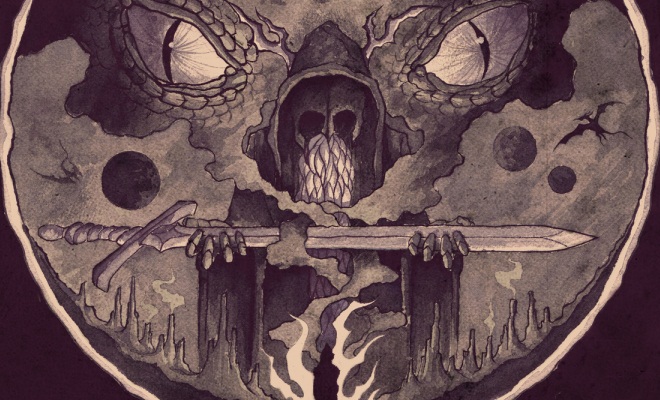 The nation of Italy – like many nations in recent years – has faced periods of uncertainty and unrest within its borders. With an already impressive and ever-expanding underground music scene, these turbulent times of doom and gloom have seen a natural propagation of extreme music that – although perhaps illuminating the tunnel itself rather than drawing closer to the end of it – has provided a positive point of focus amidst the discontent.

Whilst some projects could be directly correlated to the chaotic world they find themselves residing in, Venetian trio Kröwnn opt instead to immerse themselves in folklore and – to an even greater extent – the expansive worlds conceived by fantasy fiction writers. Kröwnn’s take on the world of doom metal is positively buoyant in comparison with many of the genre’s more caustic and oppressive acts, combining Clutch’s more conspicuous persona with classic Sabbath worship to create an entirely hedonistic fusion of doom and stoner rock that lives and dies by the riff.

That’s not to say the music is diluted in any way; 2013 debut Hyborian Age proved otherwise and this sophomore effort is doubly convincing, with seven minute opener ‘Skeksis Dance’ shifting between slow, pounding riffs and rollicking stoner groove. After the unadulterated jam room doom of ‘Wyvernking,’ it becomes apparent that Magmafröst is strong enough to succeed here as an instrumental piece – and with the sparse placement of vocals it almost becomes exactly this – although Michele el Lello Carnielli’s Neil-Fallon-meets-Dave-Wyndorf drawl goes beyond mere bells and whistles and despite sounding distinctly un-Italian, his vocals add an extra dimension to the music, fueling the fire rather than dousing it.

For anyone unconvinced at this point, the strident ruckus of ‘To Minas Morgul’ immediately dispels any and all doubts; the growling bassline introducing a band who manage to find a hidden reserve of energy and dynamism that invigorates the album all the more. The riffs may be far from innovative, but this is incidental at this point, and rarely are they executed with such aplomb as they are here. Silvia Selvaggia Rossato and Elena Fiorenzano’s formidable backline proves crucial to the success of this album, leading the way for Carnielli’s down-tuned clamour as ‘Sleipnir’ continues the pacier, livelier groove, channeling Odin’s eight-legged steed admirably as it tears through its boisterous existence. As ‘Forge of Crom’ concludes the album in a similarly grand fashion to its beginning, it becomes plainly clear that there’s a modern gleam to Kröwnn’s sound that – despite their allegiance to the old school – ensures the band sound anything but redundant in 2015.

Magmafröst is an abundance of epic fantasy doom, playing out like a re-imagining of The Lord of The Rings with the contents of Gandalf’s pipe being filled with something decidedly more potent, with Frodo and Sam off on an acid trip to Mount Doom. This is unmitigated doom indulgence – no corners cut, no stoner left unturned. Being drawn into the fantasy worlds referenced throughout will undoubtedly heighten the experience, so grab your weapon of choice and dive into this bubbling cauldron of perpetual riffs, lest Crom is angered and casts his disapproving judgement upon you all.