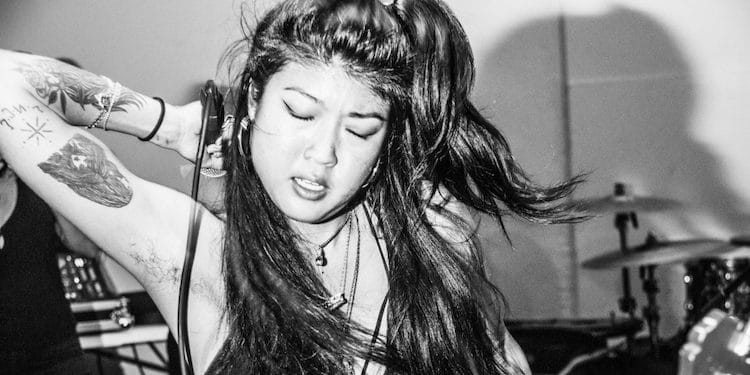 Krimewatch doesn’t fuck around. Their new and self-titled LP is just 12 minutes long and it’s not that they’re lazy, it’s just that they are immediate, serious and make us feel that what they have to say is important. The best part is that nothing here seems to make sense, which is precisely why Krimewatch are so interesting. First of all, they’re named as if they were your local neighborhood watch, keeping an eye out for felons, and well, their logo is designed like something out of some weird noir vigilante story. Sometimes they sing in English and other times sing in Japanese. That’s right – they sing in Japanese. That’s because Rhylli is Japanese, and according to her, it’s in order to defy the stereotype of the submissive Japanese woman. It makes sense, for we are speaking of the country where “the nail that sticks out shall be hammered down” is practically the national slogan.

Krimewatch are from New York, and at times they really sound like it, particularly right about the time one of those crazy breakdowns start. That’s when you think that they are about to embark on some classic New York Hardcore tough guy mosh part. But they don’t; they usually turn to the more punk side of things, and something that these guys sure as hell do is cut out the fat. There’s nothing superficial or unnecessary about Krimewatch. Even though the band is from New York, forget about all those typical punk and hardcore influences like Roger Miret, because in that regard, their singer might as well be from outer space. She wasn’t really into all that hardcore stuff before joining the band. She leaned more to the hip-hop side of things, like Jay Z, Missy Elliot or Nas, and she’s not shy about admitting it either. Not that that comes out in any way on their songs, but this detachment from hardcore reality probably helped in making Krimewatch sound different from most punk and hardcore bands these days, New York or otherwise. And the fact that she’s Japanese doesn’t in any way make them sound like any of those classic J-Punk bands. IKrimewatch take the best of all the worlds they come from and build something of their own. And instead of turning to particular niches, they sound like a timeless hardcore band that could be from 1985 or 2025.

Then there’s all those seductive song names and their lyrics, at least the discernible parts amidst all that Rhylli spits out, sandwiched between those beautiful mid ’80s hardcore sounding instrumentals. I can’t say for sure what a song like “New York Nightmare” is about, but I can tell that the words “You must be confused” are repeated quite a few times, as if the whole band is pushing someone into a corner. And that pretty much sums this record up; just take a look at pictures from their live performances. Then there’s “Coward,” with a sing-a-long bit that makes us yearn for those hardcore glory days when every band had at least one sing-a-long bit; in here, the watchword seems to be that she doesn’t give a fuck. There’s a song titled “Machismo” which is pretty self-explanatory and now that I think of it, everyone keeps talking about the fact that ¾ of Krimewatch are female, and I suppose that’s a good thing. The more people are exposed to it, the faster women in punk will stop being a novelty, and perhaps then we can start appreciating things for what they are instead of acting like this is a sport with all-female and all-male leagues. And what goes for women also goes for nationalities, sexual preferences and basically everything.

I don’t have the faintest idea of what these guys say in Japanese, but using automatic translation I get that one of the songs is called “Peace Dream,” which leaves me wondering if there’s irony in it or not. There’s another Japanese song called “Pissed” which sounds even better than in English, and then there’s that excellent track entitled “Paranoia,” with a chorus that totally does justice to the song name.

Thing is, sometimes it’s not that easy to tell if Krimewatch are singing in English or Japanese, but one thing is for sure: this band kicks ass like they’re the Incredible Hulk, smashing small little men in fury.