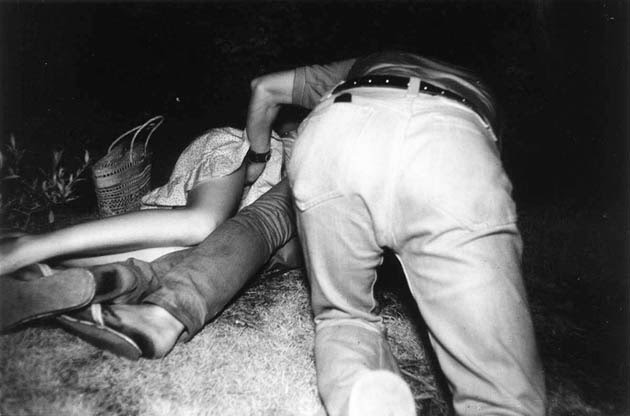 Vancouver has a huge park right off of the city center, Stanley Park. As a kid, I saw it as the home of the seawall where we would ride our bikes, beaches where we’d swim, and the forest tunnel we drove through to get downtown. As I got older, I realized it was a great place to go and smoke weed and drink as a teenager. I also realized that under the cover of darkness and trees, people got up to a whole lot of weird shit and that the park that dominated my childhood was also a freaky, scary place at night. So imagine this kind of city park, a sex and drugs playground for people looking for anonymity and a place to hide; and then imagine a dude stalking them with a camera, infrared film, and a flash, capturing their most secret and vulnerable moments. That’s what Japanese photographer Kohei Yoshiyuki did for his series “Park,” where he took photos of the late-night trysts in Tokyo’s parks in the 1970s. The images are weird and surreal, but what they show is all too real, and the underbelly of human existence, the stuff we want to hide from our families and friends, and the light of day. Guys crawling military-style over to a couple laying in the grass, trying to cop a feel while they go at it. Men waiting for a meet-up under the trees. It’s freaky park sex, Japanese-style.

In this article:Featured, kohei yoshiyuki