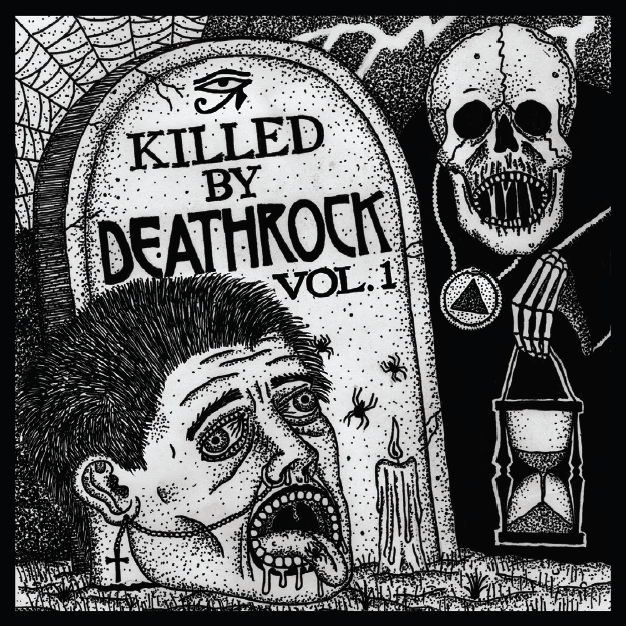 First off: Buy this comp. If you care at all about the history of postpunk or gothy guitar music since the late 1970s punk explosion, you should own this.

Sacred Bones’ new “Killed by Deathrock, Volume 1” anthology collects, Nuggets-style, some of the less well-known dark postpunk, gothic rock, and deathrock bands from the 1980s. Although the internet and mp3 filesharing have dramatically changed what’s thought of as “obscure,” it’s fair to say that in the big scheme of things, the bands that Sacred Bones have collected here are indeed gathered from the more obscure recesses of deathrock’s history.

Oh, are there other deathrock comps that you’ve listened to? Of course there are. But herein, my ghouls and ghosts, is why this one is especially good. I hope the “Volume 1” in the title is a hint that more volumes are to follow, in which case the collection’s borrowing from the “Killed by Death” series of compilations of obscure hardcore punk bands – for its title and inspiration – would prove especially apropos, not to mention just plain old cool. My only request would be that Volume 2 has liner notes with a brief bio or capsule synopsis about each band featured, something that is unfortunately lacking in “Killed by Deathrock, Volume 1.”

Why focus on what is lacking, though, when this is such an excellent compilation? Let’s see what gems await in this tasty collection of dark music.

This is essential listening, here – and it’s essential listening for fans of dark music of all stripes. This compilation is a good representative sample of bands taking the punk DIY ethos to heart to make their own statements and their own voices heard in an 80s Cold War era of Reaganomics and bland, MTV top 40 pap. And it’s important to situate the music of this compilation squarely in that cultural context in order to appreciate its full impact.

Unlike the recent (and equally excellent) Dark New York vinyl-only compilation of NYC deathrock and postpunk bands (which I also wrote about earlier here), “Killed by Deathrock” is international in scope. Also, it’s available on CD as well as vinyl.

The first track is from Colorado’s Your Funeral, a really great but unfortunately short-lived dark postpunk band that reminds me of stuff in the vein of Pink Military, Lost Cherrees, and other female-fronted postpunk bands from the 1978-1983 era. Track 2 comes from Sweden’s Kitchen and the Plastic Spoons, probably best known for their bouncy, gothy, uptempo track “Happy Funeral.” But their track here, “Liberty,” really brings to mind the comparison this comp has garnered to the Nuggets collection of underground 60s proto-punk bands; here the Spoons definitely channel an almost 60s garage psych sound. Speaking of Kitchen and the Plastic Spoons (whose singer is depicted above), Josh Cheon’s Dark Entries record label recently made an important reissue of the Kitchen and the Plastic Spoons’ “Screams to God” LP. That LP is a better representation of the band’s overall sound than the track on this compilation. Kitchen broke up by 1981, incredibly – but they left a great legacy of music behind. Ironically, Dark Entries (the record label) was inspired by the Cleopatra “Gothic Rock” comps (namely, track 1, “Dark Entries,” by Bauhaus, which was in turn inspired by British horror author Robert Aickman) – which were surprisingly excellent, and still integral, with their liner notes by Mick Mercer. And yet Dark Entries has recently taken more of a focus on electronic music; Sacred Bones, however, has doubled down on reissuing many of the more vital and oft-overlooked guitar-driven postpunk/deathrock bands of the 80s that are more in line with the spirit of the punky “Gothic Rock” comps. (See: Sacred Bones’ awesome recent reissue of Vex’s “Sanctuary,” a band whose driving, Killing Joke-esque chunky guitar rock tunes are the absolute antithesis of electronic “dance music.”)

Having said that, fans of “Killed by Deathrock, Volume 1” would be well-advised to check out Dark Entries’ reissue of “The Thing from the Crypt” compilation, which features bands like the Sad Lovers and Giants, the Soft Drinks, and the S-Haters (who deserver their own reissues — their own VINYL REISSUES, and soon).

Track 3: Twisted Nerve’s “When I’m Alone.” Folks listening to gothic rock and roll for the first time may find this cult goth band’s entry here to be the gothiest thing so far on this comp. “Twisted Nerve,” of course, was the name of a classic British horror film as well as a song by The Damned on their own gothy 1980 Black Album. Echoey “disaffected vocals” paired with a fuzzed out and crunchy guitar, mixed with a drummer who sounds like he’d rather be banging away in a hardcore punk band – it all amounts to excellent, classic, British proto-gothic rock.

Italy’s MOVE are next (track 4). Not to be confused with “The Move” of the Nuggets compilations – that The Fall later covered (“I Can Hear the Grass Grow”), Italy’s Move were a mid-80s gothic rock band that made an incredible 12-inch vinyl mini-album, and then faded away into obscurity. Max Skam of Italy’s preeminent current deathrock band, Dystopian Society (who I interviewed here), tells me they are from Rome and recorded this track in Firenze. Awesome. They need some serious reissues.

Track 5: Bunker, a French coldwave band that later re-dubbed themselves Bunker Strasse. And, ah – FRENCH COLDWAVE. What to make of that genre distinction! Is it deathrock? Is it postpunk? Is it goth? One of my pet peeves (as folks who know me personally will tell you) are the insane amount of bands that get shoehorned into the “coldwave” category, when they seem so sonically disparate at times, but because they are from France – well… I have heard everyone from the uptempo 4-piece hardcore of France’s Les Thugs called “French Coldwave,” to the spartan, synth-driven music of Clair Obscur also called that, to the postpunk-y middle ground of France’s Ausweis also called “coldwave.” Whatever the case, Bunker’s track here is a winner. However you want to break down these sub-genres, it’s a good song.

TASTE OF DECAY. Fuck yes. A German up-tempo gothic rocker of a song that shows the roots of deathrock – a gothy punk explosion of fast beats and postpunk vocals, the perfect segue between hardcore punk and gothic rock and roll. Which is what the original deathrock movement was all about. Track 7: Afterimage. A song title from Lou Reed paired with a guitar riff from Joy Division. How could you go wrong? You can’t. Track 8: Screaming for Emily. Goth as fuck. In a good way. But – East Coast US gothic rock and roll, part of the mostly-as-yet-unexplored discography of the late 80s gothic rock movement in America, before the whole lame industrial dance crap took everything over in that scene. Screaming for Emily need their day in the sun. Hopefully, this awesome track here (“The Love”) will do its part to remedy that. Glorious Din – “San Francisco’s Joy Division,” on track 8 here, not ever to be confused with the confusingly similarly-titled goth band Din Glorious. Eric Cope is an amazing vocalist. Minor note guitar riffs that would nowadays be considered proto-black metal. “The earth below, in slow motion” – Eric Cope’s vocals capture the sort of disaffected and alienated tones you don’t hear elsewhere save for in Joy Divison’s “Komakino.” In fact, this single song one-ups the best of Joy Division. I am not kidding. Glorious Din came out with two amazing LPs, both worth a reissue and both almost flawless – but eminently listenable – artifacts of mid-80s postpunk doom and gloom. And they’re American. (Where are you, Eric Cope?)

The Naked and the Dead feature in the next track — a hardcore 80s NYC gothic rock band that were featured in Dark New York and who definitely kept the flame alive during the 80s between the NYHC scenes and the overarching international, gothic postpunk scene. In fact, members of this band are still active today in bands and writing music or running labels, today. (See below.)

The last band on the LP, Baroque Bordello, are an 80s French postpunk band, which seems, to me, that that should qualify them as being “COLDWAVE” (like Bunker Strasse, earlier). Maybe they are, maybe they aren’t. Whatever they are, again, we have some solid gothy postpunk here, rounding out the comp/release.

Here are the songs on this comp:

2. KITCHEN AND THE PLASTIC SPOONS – “Liberty” 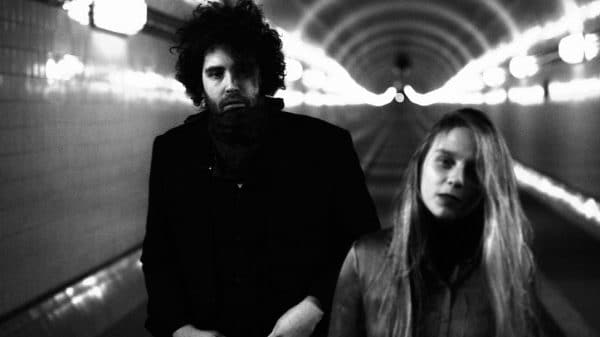