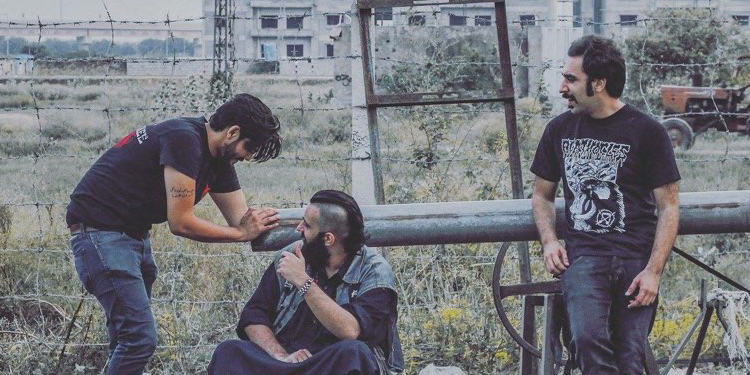 Blink and you’ll miss it, but Hassan Amin recently appeared in a cover story on the mighty Converge.  In the pages of the print scene stalwart Decibel, he spoke eloquently of the band’s legacy and impact. What caught me, however, was how he spoke of alienation, of chaos, of suffocating in a collapsed society.  As a resident of Lahore, Pakistan, he’s creating some of the most vibrant and intense music the country has perhaps ever seen.  As you can imagine, this doesn’t come without myriad challenges.  Lacking in the punk infrastructure of the States, he’s seemingly responsible for constantly reinventing how his scene survives.

As it’s possible in 2017, my curiosity turned into a globetrotting conversation within minutes.  Hyper-intelligent, active and relentlessly passionate about music, Amin proved to be a treasure trove. Though he’s unlikely to admit it, he lives very near the lifeline of extreme music in Pakistan.  As lead singer of grindcore outfit Multinational Corporations (MxCx), classic hardcore punks Dead Bhuttos, and Hip-Hop Collective Daranti Group, he also managed to find a twenty fifth hour to open an art/show space.  Sheraz Ahmed, guitarist in both MxCx and Dead Bhuttos, was kind enough to open me to world I had shamefully no knowledge of.  Both bands are fucking killer… Do yourself a favor and get damaged. Explore Lahore Core. Do you remember your first exposure to extreme music? How’d you come to discover it?

Sheraz: I don’t really remember. It was a gradual descent into the extreme from old school. But I have never been into ‘extreme music’ only. My musical passion can be best described as a rhizome, it grows in multiplicities and remains under the ground.

Hassan: In school. I was looking for heavier forms of music, which I could relate to, and thanks to the internet discovered a slew of old school punk and metal. I would read articles, interviews, find out who influenced what, and just got into a bunch of other music too eventually, such as hip-hop, industrial etc., which had the same energy I sought out in heavy music.

Typically, band name origins are boring but, in this case, I’m intrigued. “Multinational Corporations” is the first song on Napalm Death’s “Scum”, right? More interesting is “Dead Bhuttos.” I’m assuming it’s a Dead Kennedys reference to Benazir Bhutto’s assassination? How is that received? Also, talk a bit about singing in both English and Urdu.

Hassan: Well, we kind of made the name for MxCx on the spot. We made some grind songs and just decided to name it after Napalm Death. But thankfully, people never mistook us for a ND worship band. We’ve always had our own identity and aesthetic, influenced by different styles of extreme music including grindcore, crust punk, hardcore punk, metallic hardcore, powerviolence, black metal… sprinkled with absolute hatred for everything related to the status-quo. Dead Bhuttos, on the other hand, was Basim’s (Kominas) old band, which disbanded after a song. Me and Basim had been online friends, sharing music with one another over the years, so when he came to Pakistan I picked him up and straight away started talking about making music. We ended up reviving Dead Bhuttos with the MxCx core lineup plus Basim, playing straight up hardcore punk this time around, continuing some of the themes we already talked about in the other band. Reactions towards the name have been mixed, but those who know about Dead Kennedys get it.

Lyrically, we focused on DB being Urdu only, and in our colloquial Lahori way of speaking – as opposed to the strict standardized Urdu. I always noticed with MxCx, that the Urdu parts would always get the crowd going and it was very well received by listeners in the South Asian cultural region – India, Nepal, Bangladesh, etc – due to Urdu/Hindi being widely understood in some parts. That, coupled with the fact that there was no one doing serious political, ideological rock-based music in the local vernacular made us wanna put out this document of political dissent. We can’t wait to do more! I’d imagine creating inherently political music is a bit different in Pakistan than it is in the States. What’s that been like for you?

Sheraz: It’s not really easy, as with all the dissenters throughout history. One has to mystify their expression in order to keep their head safe. A lot of people have been abducted for speaking up against the power structures and authorities. Some are banished, some never see the light of the day.

Bars make up a large number of the venues in the U.S. …Not having that option, what’s the scene like in Lahore? What’s a typical venue like?

Sheraz: Typical venues for us are small indoor ones. We used to have bigger venues around 4-5 years back. But then most of them closed down or turned into marriage halls because of the declining security situation and lack of economic inflow.

Hassan: Yeah, we’ve held gigs in school classrooms, backyards, empty swimming pools, paintball fields, whatever we could get our hands on. It was very DIY. But lately some venues have opened up that have good live music, and the bigger ones are having regular music events too nowadays so things can get better hopefully. I started my own place called “Inner City Art Centre” to try and generate some regular activity. Having your toes in both grindcore and punk, is there a unified scene for both, or is it more fractured as it is here?

Sheraz: Where we come from, not many people can distinguish between grind and punk. And most of the shows we’ve played were with bands of different genres.

Hassan: The punk listeners came from the metal scene initially. Plus, you tend to introduce tons of new people to your music with every show. There’s not really much of a scene, never has been. Just dedicated people working on their art until the daily grind sucks them in.

What are some bands in Lahore or Pakistan at large that people should be aware of?

Sheraz: A lot of bands are coming up lately. But not many in the extreme scene. To name drop some old bastards, Dusk is probably the only band I can think of.

Hassan: Marg was a cool punk rock band that sung in Pashto. Janoobi Khargosh does some different kind of stuff. And check out Darkside from Karachi for the meanest hip-hop you’ll hear from Pakistan.

How can people get in touch?

Hassan: Contact us on one of the band pages or email at multinationalpk@gmail.com