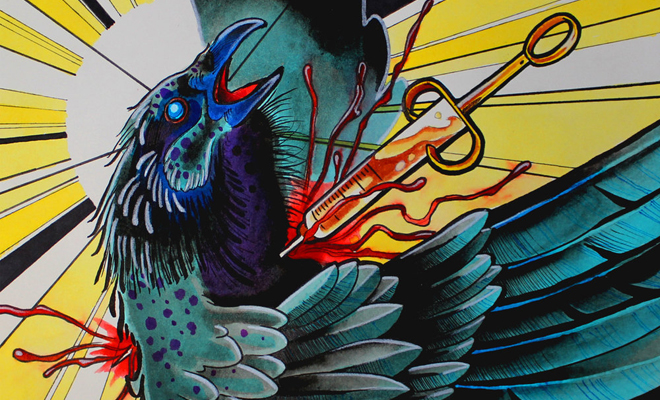 In the age of the Internet, touring has become inseparable from playing in a band. Bookers across the country can relate to the difficulty of accommodating for the sheer amount of bands consistently on the road. We forget sometimes that touring is a privilege, not a right; a privilege that some bands have to work hard to achieve; a privilege that some bands sacrifice to be able to achieve. One of these bands is KDC. Now living in Buffalo, NY, KDC was originally based out of Puerto Rico. Unfortunately, while Puerto Rico was a great home to KDC as a band, they felt like they had to leave their home to make their goal of becoming a consistent touring band a possibility. While Puerto Rico still feels like home to Ricardo (vocals), he describes the reasons he needed to move to the States, “when I finished school in 2010, I saw myself getting more involved with touring. I wanted to do it more than once or twice a year; I wanted to do a few months outta the year on the road.” Having friends at the now defunct Buffalo DIY space, The Funeral Home, Ricardo chose Buffalo for his new home. Leaving his band mates in Puerto Rico, Ricardo assumed that he would be starting the new chapter in his life; that is, until KDC’s guitarist, Juan Carlos, decided to join Ricardo on the move. Four years later, Ricardo and Juan have continued the band, setting their sights on continual touring and writing. Ricardo describes one of the biggest changes that the band has seen since moving to the States was the addition of Aaron on drums: “I think the fact that we’ve always had revolving members is what makes us change so much. Aaron has been our longest running drummer. Aaron brings his buffalo influences. We take to him and have evolved gracefully; he is key in our sound right now.”

In 2013, KDC released their debut LP, The Veracity of Solitude. Available on vinyl through Head2Wall Records, The Veracity of Solitude has unfortunately not been given the attention it deserves. Ricardo describes a Puerto Rican sense of genre hybridity, and it really shows on the record. The LP feels different than modern hardcore, and while it contains elements of metallic hardcore — arguably even metalcore — it doesn’t fit seamlessly into either of these categories. The LP is unique in its own right, something that is very difficult to achieve in the millennial era. While bands are clamoring to sound like [insert popular band name here], KDC take a string of varying influences and meld into a surprisingly unified sound. If I were to try and compare it to anything, the closest I could come would be to align it with the current vibe of German/Spanish neo-crust bands, but even this association is loose at best. KDC is great, challenging hardcore that defies constrictions.

The record is extremely polished, very well recorded and mastered. The low registers are tight and really offer a lot in terms of production value. The LP has a presence that is felt as much as it is heard. If you take only one thing from this record, it will surely be the sound of the drums. The kick has an attack that most polished hardcore records lack. Where often the kick sounds farty and uber-deep, KDC’s kick is full and powerful. Similarly, the snare is thankfully not buried; it is crisp and sits above the mix, right where you want it, without sounding too tinny. The only slight complaint I would have about the recording comes with the guitar. While the guitar is well recorded, it has that scooped, muddied sound. The tone makes for a dark and brooding sound on its own, but tends to become buried in the mix a bit — a little too modern for my liking. KDC do share a likeness to fellow Buffalo outfit Every Time I Die, but, while the comparison may scare a few people away, KDC is far more versatile than ETID. Their hardcore sensibilities shine brighter than their metalcore vibes. KDC are at their best when they are pummeling through tunes, but they don’t shy away from slower, more melodic parts. A slew of discordant leads fill in the space, creating a dynamic tonality. Side A sees KDC at its more aggressive and fast, while Side B is a bit more experimental. But, that is not to say the record doesn’t feel cohesive as a whole. Where some bands spread music out in a deliberate, segregated manner, The Veracity of Solitude is pretty well-balanced. Without dwelling on a sense of nationalism, Ricardo talked about where KDC feels the largest sense of belonging: “The line gets thinner and thinner as we go. Certain things make me call us Puerto Rican, other things make me feel like we a Buffalo band. I honestly think we have the best of both worlds.” While the current state of receptivity in punk and hardcore seems to shy away from genre hybridity, KDC defies convention, offering a little bit of something for everyone. Highly recommended for fans of Perth Express, Alpinist, Centuries and Converge. In a continual effort to stay on the road, KDC will be kicking off a tour with Snakeway soon, stayed tuned for the announcement and dates.

In this article:KDC, slider, The Veracity of Solitude