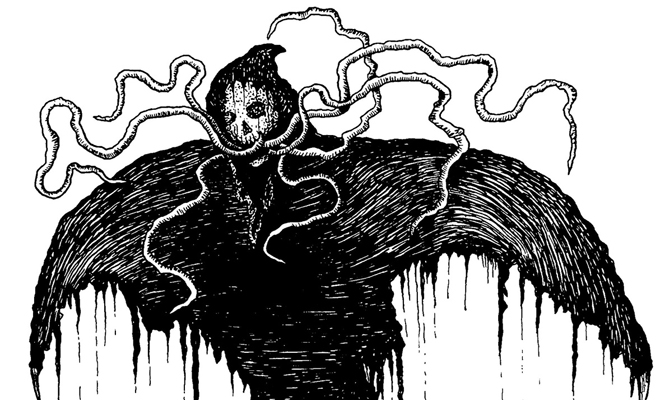 I don’t speak Spanish. This band is from Panama. The primary language in Panama is Spanish, a language I do not speak; therefore, I don’t know what the hell is happening with this band’s lyrics, but I just don’t care. This is ripping, crushing, brutal goddamn d-beat, doom, death, whatever-metal in the vein of Darkthrone or Swordwielder and it is rad.

This is music to steal your father’s Harley to, pick up your hot, nubile girlfriend and drive into the sunset with your perm blowing beautifully in the wind. I don’t care how dark this band is supposed to be, it all sounds so damn triumphant. It’s catchy, and balls-out heavy and unique. If you’re looking for uniqueness in your metal, look outside of the United States and Scandinavia. The rest of the world is getting ahold of Mayhem records and Pentagram records and Disclose records all at the same time and spinning it back out into heavy, lo-fi records and it’s goddamn fantastic.

Juventud Podrida hop from genre to genre in a span of four tracks. The production is fantastic. The guitars are like a punch in the stomach, the drums are crisp and fluid and the bass is skull-crushing, but it’s the vocals that make me fall in love. They are soaked, drenched, engulfed in reverb, giving them a murky, alien quality similar to bands like Grave Miasma.

The record is surprisingly groovy. I can’t spell the tracks, so I won’t even try. The first, eponymous, track could easily be a Pantera song, if Pantera decided to spend some time in 1978 Brixton and then hightailed it to frostbitten Norway. Every part is dynamic and expertly played. The second song is possibly the highlight, a heavy, slow dirge with a brutal Power Electronics outro.

The third track is pure Puke (the Swedish punk band) with the added stomp of Hellhammer. The album burns to a finish with it’s fourth track, a fierce Dis-beat number that would have Kawakami jump out of his grave and punch you in the fucking face.

This is a great 7-inch. It captures some of what metal was, without once relying on the wink and a nod retro-ness Decibel magazine circle-jerks over. These guys clearly live this. Check this out if you’re interested in pretentious-less quality metal.